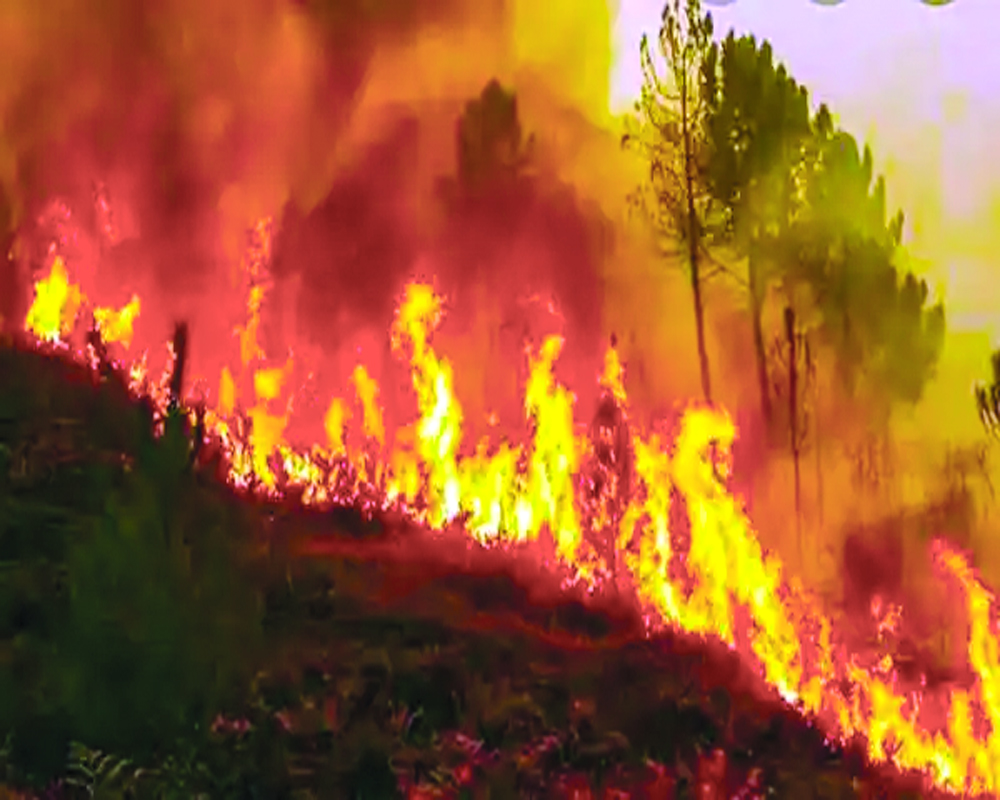 Natural causes and human intervention are to blame for the rising number of conflagrations not only in India, but the world over

The surge of forest fires in Uttarakhand once again underlines the growing incidence of the phenomenon in India. There has been a series of these this year in Himachal Pradesh, the Nagaland-Manipur border, Odisha, Madhya Pradesh and Gujarat. According to the India State of Forest Report 2019 (ISFR) — the latest in the line of such reports — released by the Forest Survey of India (FSI), Dehradun, over 30,000 forest fires were reported in the country in 2019. The report identified nearly 21.67 per cent (7,12,249 sq km) of the country’s land area as forested. Another 2.89 per cent (95,027 sq km) was under tree cover.

The report identified 2,77,758 forest fire points across the country, and stated that about 21.40 per cent of India’s forests are prone to fires. Of this, 3.89 per cent belonged to the category of extremely fire-prone, 6.01 per cent very highly fire-prone and 11.50 per cent highly fire-prone.

The forests in Assam, Mizoram and Tripura are “extremely prone” to conflagrations. According to the Ministry of Environment, Forest and Climate Change (MoEFCC) annual report for 2020-21, the States with large forest areas and falling under the “very highly fire-prone” category — including Andhra Pradesh, Manipur, Meghalaya, Mizoram, Nagaland, Odisha, Maharashtra, Bihar and Uttar Pradesh — were turning into “extremely fire-prone” hotspots; so were regions like western Maharashtra, southern Chhattisgarh and areas of Telangana and Andhra Pradesh, along with central Odisha. Areas under the “highly prone” and “moderately prone” categories make up about 26.2 per cent of the total forest cover — a staggering 1,72,374 sq km.

A State prone to forest fires is Haryana which suffered at least 540 of these from 2016 to 2020. Uttarakhand and Himachal Pradesh are witness to the most frequent forest fires annually. According to the National Forest Inventory under the MoEFCC, the fires severely affect almost 10 per cent of the country’s forest area while mildly affecting about 54 per cent, which makes about two-third of India’s forests vulnerable to fires.

The question is: Why is it so? Lightning is the most important natural cause. Another is the spontaneous combustion of dried-up leaves and sticks. The one that has been an increasingly potent factor, and is set to become even more so, is global warming. It dries up the leaves and shrubbery on the ground, making them highly inflammable. It also dries up the soil. Thus, the lack of soil moisture as a result of rainfall deficiency during monsoons — less than 18 per cent and 20 per cent in 2019 and 2020, respectively — has been an important factor in this year’s Uttarakhand fires. In fact, it has been a cause not only in many other parts of India but the entire world — the blazes bedevilling Australia, California in the US and the Amazon rainforests in Brazil are examples.

Human activity, however, is responsible for the overwhelming majority of forest fires the world over. In India, these blazes are mainly caused by the slash-and-burn method of shifting agriculture, known as jhum in Arunachal Pradesh, Nagaland, Manipur, Mizoram, Meghalaya, Tripura and Assam, where it is practised over about 15,000 sq km of forest land. The blazes are also set off to clear the ground for mining, timber felling and the construction of human settlements and industrial units, besides warding off the wild animals.

People burn dry leaves and shrubbery on forest grounds, believing that it would lead to the sprouting of new and healthier grass. Poachers light fires on three sides to corner fleeing wild animals in one area as their concentrated presence helps killing. People visiting forests are often careless and leave behind lighted butts of cigarettes or bidis, besides inflammable material.

Things are made worse by the fact that it is difficult to extinguish forest fires. The absence of roads prevents fire tenders from reaching the sites and high winds carry the sparks to new areas. Helicopters are pressed into service — as in Uttarakhand recently where two Indian Air Force helicopters, each with a 5,000-litre water tank, were deployed. There are, however, limits to the number of helicopters that can be used and the availability of large lakes or rivers from which these can draw water.

Forest fires wreak havoc in India every year. They destroy forests, cause pollution, turn streams dry or adversely affect their water quality, damage soil nutrients and increase the risk of soil erosion. They kill wildlife and insects, including endangered species, and destroy their habitats, damage national parks and sanctuaries, driving the wild animals like tigers, leopards and elephants towards human settlements, thus aggravating the human-animal conflict. And, of course, they kill humans and destroy their property.

The question is: What is to be done? Forest fires are as old as forests and will continue to occur as long as forests exist. One, however, can limit their incidence by firmly dealing with the timber, builder and mining mafia, and the poachers, and simultaneously enlightening people not to carelessly leave incendiary material in forests. The Central and State Governments will have to launch sustained campaigns to this end. The consequences of not doing so will be severe.