India-Maldives ties are still quite fragile

India-Maldives ties are still quite fragile 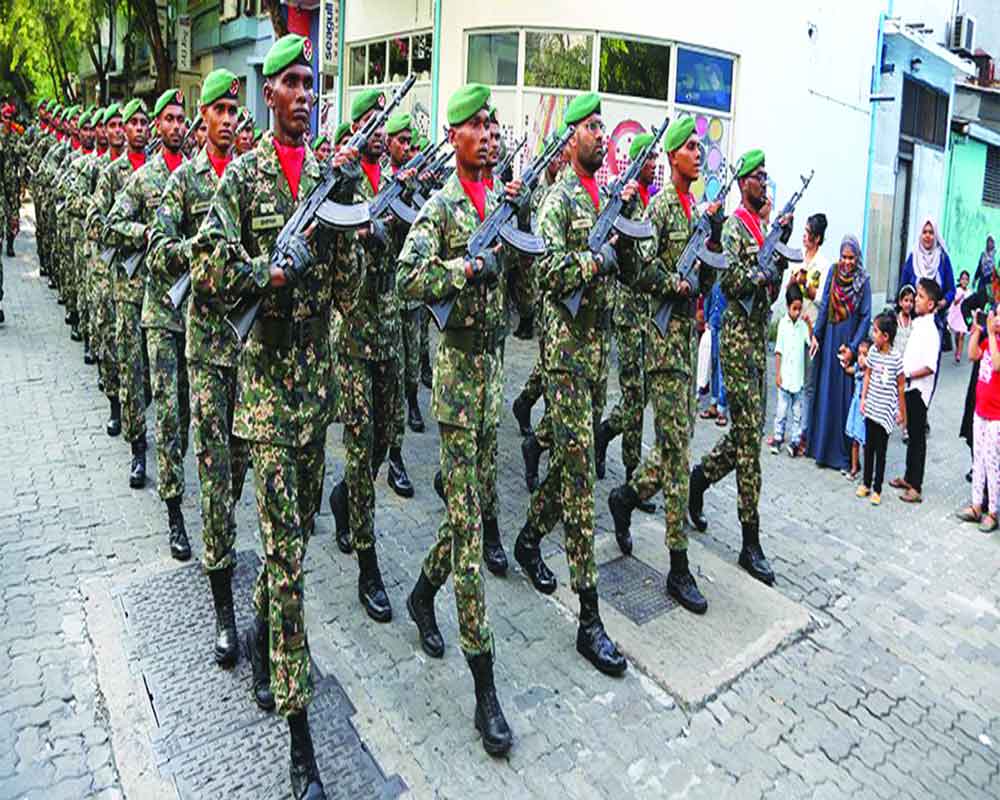 Maldives is the world’s ninth smallest country at 90,000 sq km, geographically dispersed with four lakh people inhabiting 200 of its 1,192 islands, with some used for agriculture and tourism. Its pivotal location in Channel 8 enables command over shipping routes from the Gulfs of Aden and Hormuz to Malacca Straits. Maldives belongs to the Sunni Shafi school wherein Islam is central and laws based on Shariah. It has the dubious distinction of having exported per capita highest numbers of Maldivians to the Islamic State (IS) in Iraq and Syria but all are believed to be dead. The IS’s front organisation, Idharaa Khidmat-e-Khalq, established a toehold and sleepers might still be there. Its economy is tourism-based, contributing 56 per cent of the GDP.

Maldives follows an ‘India First’ policy since 2018 before it was considered ‘lost to China’. Beijing is still heavily invested in Maldives and owns Finalu island, where it is building hotels. Former President Abdullah Yameen had changed the Constitution for this. Maldives signed the first FTA with China and owes it $1.4bn. Beijing is on the lookout for atolls — where Chinese expertise in land reclamation adds to space for strategic posts. China’s String of Pearls was effectively demonstrated in Maldives as was the extension of Maritime Silk Route. It was due to Chinese pressure that India’s GMR contract for building Male airport was cancelled. The contract was given by President Nasheed of Maldivian Democratic Party, which tilts towards India. But China has a strong base among the Opposition parties.

Internal developments will determine whether Maldives will be China or India First. While Yameen is in jail for corruption, the main Opposition Progressive Party of Maldives has been taunting MDP’s president Solih for “selling” Maldives to India and started an ‘India Out’ campaign. The rift between Solih and Nasheed is a power struggle as the latter returned last month from Berlin and London after treatment following a terrorist assassination attempt. Nasheed, who has asked Solih to ‘course correct’ before it is too late following his pandering to religious extremism, has also been advocating the parliamentary system. Unity within MDP (there were reports of a likely split) will influence the outcome of the September 2023 elections.

The Opposition has been attacking the Government for allowing India a consulate in Addu atoll, calling it a possible “safehouse for Indian spies”. India’s refusal to take back two Dhruv helicopters based in Addu had caused an outcry. Addu is the second largest city with a population of 30,000 and a strategic outpost. Maldivian sensitivities on India’s presence are interpreted as boots on the ground. The decision on Addu Consulate appearing in Indian media first also irked Maldivians. India is building a police training facility and Coast Guard harbour. The Solih Government does not share details of agreements with India, citing national security. The ‘India First’ policy has led to anti-India rhetoric and even a threat to blast the Indian High Commission.

The India-Maldives relations are ancient with ups and downs. India’s Operation Cactus (1988) to prevent PLOTE mercenaries seizing Male, New Delhi being the first responder during tsunami 2004, Indian naval ships providing drinking water during the water crisis of 2014 and ongoing medical and vaccine supplies during the pandemic are some highlights. Nearly 85 per cent of the population is now double-jabbed. India has become the biggest donor with projects worth $800mn being implemented across 34 islands. Total investment is now valued at a significant $1.3bn. The Greater Male Connectivity project is the largest-ever Indian enterprise in Maldives. It consists of a 6.4km bridge and causeway which will connect three populated islands. An air bubble has been created between the countries, involving 60 direct flights from five cities with Indian tourists being maximum and Chinese nearly zero. This has boosted receipts by 104.5 per cent after COVID had contracted the economy by 33.2 per cent.

Defence cooperation is central to bilateral relations. Political uncertainty in an environment of religious extremism will likely breed radicalisation. Arms and drugs smuggling, terrorism, piracy and environmental fragility are threats. Besides signing defence protocols with India, Maldives recently committed to the US and Japan for the Maritime Research and Coordination Centre. The India-Maldives-Sri Lanka maritime pact will soon include Mauritius, Seychelles and Bangladesh. Indian Dorniers, Dhruv helicopters and coastal radars are suitably located for surveillance and maritime rescue operations. Maldivian military personnel train in India. Maldives recently hosted the Indo-Pacific Intelligence Conference with US Pacific Command and was attended by 17 countries where Maldivian Chief of Defence Forces, Maj Gen Abdulla Shamal, praised India for providing assistance and expertise to meet military challenges, including non-traditional ones. A Maldivian officer is now posted at the Maritime Fusion Centre in Gurgaon. Interestingly, India has submitted a DPR on the erstwhile British strategic base at Gan island that the Chinese have been eyeing for long.

After being edged out by China, India is back in business. But the situation is fluid due to political dynamics and religious extremism. India has to play its cards carefully to maintain its primacy in the face of Maldivian Opposition and Chinese opportunism.