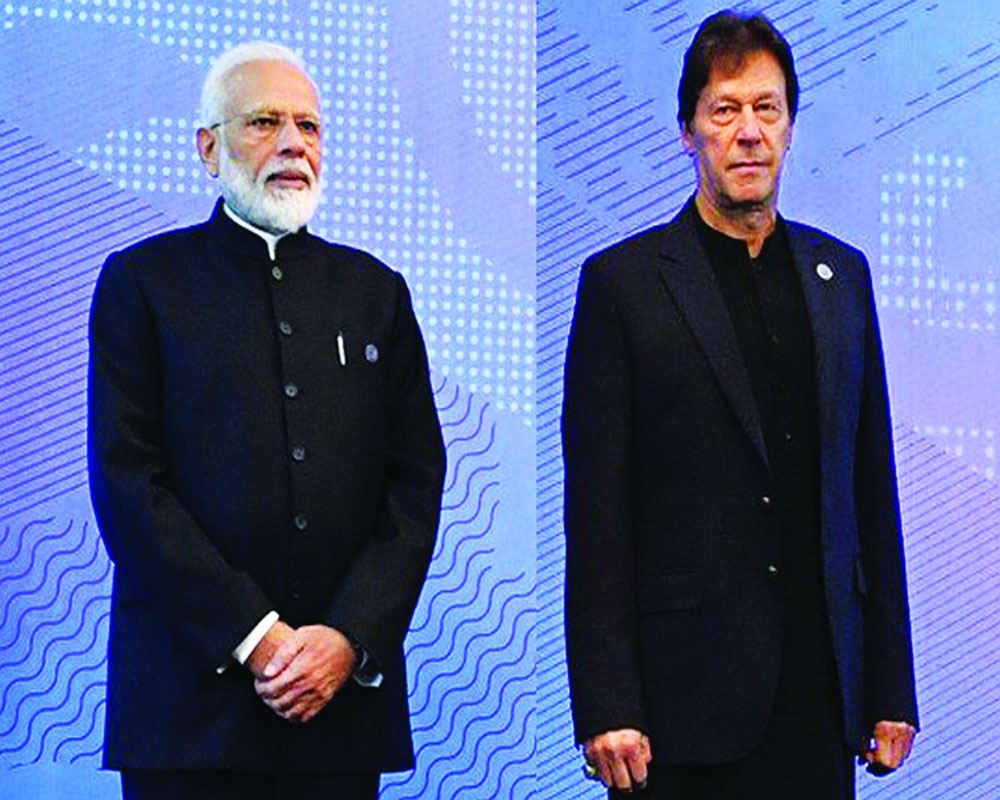 Right now, peace looks elusive, but the peace process does not. By all aspects, it is clear that the process is thriving and may succeed in thrashing out some of the differences

One does not need to be a rocket scientist to know Pakistan Prime Minister Imran Khan has robbed whatever little credibility civilian Governments in his country have, with his multiple policy flip-flops. Just like one does not need to be an astute political pundit to know Prime Minister Narendra Modi is not like former PM Rajiv Gandhi in wanting to leave contentious border disputes to the “wisdom of the next generation”. If anything, PM Modi has enough political capital to push through a resolution. Amidst the contrast in the two civilian leaderships of the hostile neighbours, how does one read the current India-Pakistan situation? Is there any prospect of peace, given that even baby steps like trade and resumption of sporting ties are not possible in the vitiated atmosphere? There are reasons to assume a positive movement will take place in the India-Pakistan ties, for three clear reasons.

First, the Pakistani economy cannot continue the status quo — of next-to-nothing trade with India. Islamabad is on its 13th loan from the International Monetary Fund (IMF) and the economy is battling a crippling inflation. Adding to Pakistan’s economic woes is its surging wheat imports. After years of being self-sufficient, Pakistan is now being forced to import wheat to feed its people. Even if one discounts any comparisons with Bangladesh — which is growing at an impressive eight per cent with higher Gross Domestic Product (GDP) and four times more forex collections — Pakistan’s economy needs help.

It is not for nothing that the Pakistani Army chief spoke about geo-economics in his much talked-about speech on March 18. No amount of jingoism can cover up for the present economic woes of Pakistan. The Pakistani Army understands this even more, given that it is one of the key stakeholders in the economy. If it were not for its obsession to ‘checkmate’ India, would the Pakistani economy — with its excessive defence spends — be in such a mess? Opening up trade with India will be the first set of the baby steps that are needed towards any normalisation. But more importantly, it will be vital for fixing Pakistan’s economy.

The worst of Pakistan’s economic mess is yet to present itself, in the form of large payouts to China. China has invested heavily in the China- Pakistan Economic Corridor, which is a vital part of its Belt and Road Initiative. China is a rent- seeking country, not an aid-granting friend. And sooner than later, China will extract its pound of flesh from Pakistan for the large amount of funds it has invested in the strategically-located country. In fact, the few sane voices in the Pakistani establishment must be wondering what would have been Islamabad’s relations with Beijing if the former was not focused only on its India hatred. It would have had normal  ties with China and not become its vassal State — only because it sought to undermine New Delhi. In the process, though, it has become heavily indebted to Beijing. As the payments would start, so would Pakistan’s economic headaches.

Second, the happenings in Afghanistan —keenly watched by Islamabad — may have a bearing on the India-Pakistan conundrum. If some reports are to be believed, the withdrawal of the US forces from Afghanistan could pave the way for a multi-nation UN team to oversee that the nation does not fall into chaos. It would be logical to assume New Delhi’s inclusion in the same, since the US has always favoured India to play a larger role. Such an outcome would be least desirable for Islamabad since it will undercut its geo-strategic importance and reduce its bargaining power with the US.

It would not be out of the ordinary to assume that some of the backchannel lines of communication may include Afghanistan and the role both India and Pakistan would play in it. After all, Pakistan — which now has diminishing returns from its Kashmir rhetoric — has not been able to successfully rake up the support of global powers on the issue of abrogation of Article 370. On the contrary, Islamabad stands to gain significantly by leveraging its role in Kabul post-US exit. So will Imran Khan (or his military bosses) want to risk a larger play in Afghanistan by holding onto the Kashmir issue? Or would they choose to show some positive gestures (like ceasefire) on Kashmir in return for continuing its important position in determining Kabul’s future?

The answer to this is clear, but its implementation will be decided by the fate of ‘informal’ talks between India and Pakistan. Nevertheless, it will be an important choice to make for all decision-makers in Pakistan (which may or may not include Imran Khan).

Third, in July, some elements in the Pakistani Army and the civilian Government will rake up the issue of integration of Gilgit-Baltistan and the Pakistan-occupied Kashmir (PoK) as the fifth and sixth provinces. Imran may not be able to resist the temptation to be seen as similar to  Modi (post -abrogation of Article 370). This will quite naturally invite a strong response from New Delhi, since the incumbent dispensation has spoken about the will and determination to reclaim both these areas. If such a situation does arise, it will limit the flexibility that can be shown by the Indian side or its Pakistani counterpart to move beyond the usual irritants.

Since August 5, 2019, the Indian Government has made its stance clear — “all future discussions will now be only on PoK” has been the usual response. Likewise, Pakistani Army’s institutional legitimacy has been centred on the need to wage a war with India to “solve the Kashmir issue”. If PoK becomes a Pakistani province, the pressure from domestic constituents will be so intense that both the sides will not be able to make any forward movement, lest they be termed a “sellout”. Given these complexities, there is high chance that these negotiations — being held behind closed doors and outside the purview of formal diplomatic channels — would expedite any outcome.

India and Pakistan are not doomed to live in hatred, hostility and tension. Despite false starts and multiple attempts by India —which have been followed by terror attacks by Pakistan — Modi may be keen to move ahead. Right now, peace looks elusive, but the peace process does not. By all aspects, it is clear that the process is thriving and may succeed in thrashing out some of the differences. A peaceful solution does not need to decide the fate of the most complex geo-political problem of the subcontinent right away; it needs to demonstrate the will to do so.

The writer is a senior journalist and Visiting Fellow at the United Services Institution of India. The views expressed are personal.