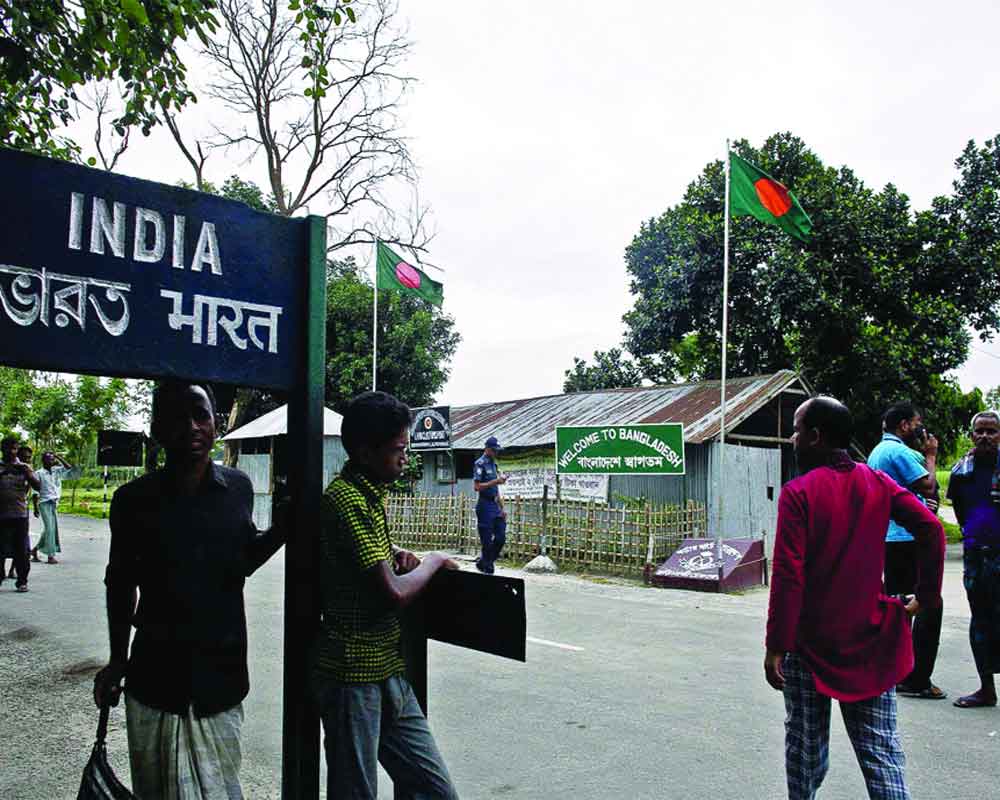 The Bangladeshi infiltrators have not only affected the economic, social and religious fields but are also participating in the country’s democratic system

The issue of Bangladeshi infiltration has become sensitive for the unity and integrity of India. Since 1971, a large number of Bangladeshi infiltrators have been coming to India. Due to these infiltrators, the demography of North-East India has undergone a disturbing change, which poses a long-time threat to the security of the country.  Post-Independence, the Congress governments took no concrete action on the issue of infiltration, as a result of which the problem has become alarming.

In West Bengal and especially in Assam, this problem became so serious that a bill had to be passed in the Parliament in 1950, in the form of the Immigration (Expulsion from Assam) Act. Despite this, not much was done to tackle this menace.

Bangladesh does not share any border with Bihar but due to the porous India-Bangladesh border, the infiltrators started coming to Bihar and entered Kishanganj, Purnia, Araria and Katihar via Malda, Uttar Dinajpur and Murshidabad in West Bengal. During 1951-1961, the population of old Purnia district increased by 37 per cent, almost twice the increase in the population of Bihar. An increase of 23.90 per cent was recorded in 1971-1981.

Former CBI Director Joginder Singh had said in a report that about five crore Bangladeshis have infiltrated into the country. This is corroborated by the fact that in the 2001 census of Bangladesh, there was a decrease of one crore people in its population.

It is clear from this that there has been an unusual decrease in the figures of Bangladesh as compared to earlier whereas this difference is common in India and Pakistan. At the same time, there is a similar fluctuation in the data before 1971, in all three countries. On the other hand, if we look at the population density data of Bangladesh, it is known that in 1980, 1985, 1990 it was 611, 697 and 792, respectively. Now if we compare these two, if the fertility rate decreased during this period, then how did the density increase so much?

Overall, Bangladesh has not made any action plan for its population control even though it has severe shortage of all kinds of resources. The government has been continuously hiding its population, the sole purpose of which is to shift their people to India.

Despite the criticism of US President Richard Nixon in 1971, the then Prime Minister Indira Gandhi gave them a place in India as refugees. Even after Bangladesh became independent, these people took advantage of staying on in India but the Congress government did not take any action. What is more, Indira Gandhi imposed a refugee aid tax of 5 and 10 paisa collected from Indians in the form of revenue and postal tickets.

Driven by narrow political interest, the Congress, Left and presently the Trinamool Congress, are all walking on the same road, leading to steady increase in the population of Bangladeshi infiltrators in the North-East and West Bengal. And now when the Modi government is taking action to check their flow and is talking about bringing the National Register of Citizens (NRC) in national interest, these parties are coming to the aid of these illegal infiltrators in the name of so-called secularism.

Bangladeshi infiltrators have not only affected the economic, social and religious fields but they are also participating in the democratic system of India, which has been their main agenda.

Mamata Banerjee had said in the Lok Sabha on August 4, 2005, that infiltration in Bengal has become a disaster. She had also brought an adjournment motion in the Lok Sabha on this. She even threatened to resign on the issue. However, when Banerjee is in power today, she is opposing the NRC for political gains. The way Bangladeshi actor Firdous Ahmed was seen campaigning for the Trinamool Congress in the 2019 Lok Sabha elections made her intentions clear.

Even today, the views of these opposition parties are the same as they were in the past. Even today, these people sympathize with the Bangladeshi infiltrators and spread confusion among people by calling them refugees. In such a situation, it becomes very important to understand and know the difference between refugee and infiltrator in the context of India.

In 2014, after Narendra Modi formed the government at the Centre and BJP got the chance to come to power in the North-East, there has been a consistent crackdown against Bangladeshi infiltrators. The changes that have taken place in the last seven years are the result of the revolutionary decision of the Union Government. Now a large number of security forces have been deployed there and various technological arrangements are being made for preventing infiltration.

We all need to reflect on this issue so that the forces dividing India can be stopped. It becomes our moral duty to save India’s culture, civilization and language. I believe that nothing should be more important to us than nationality. For us the unity and integrity of the country should be paramount. The first and last right on India belongs to the citizens here. Therefore, the concern for all of us should be the same that as a nation, we should become stronger and more prosperous.

(The writer is vice-president of the BJP in Bihar and a Member of the Bihar Legislative Council. The views expressed are personal.)