Joe Biden slips with his soldiers

Joe Biden slips with his soldiers 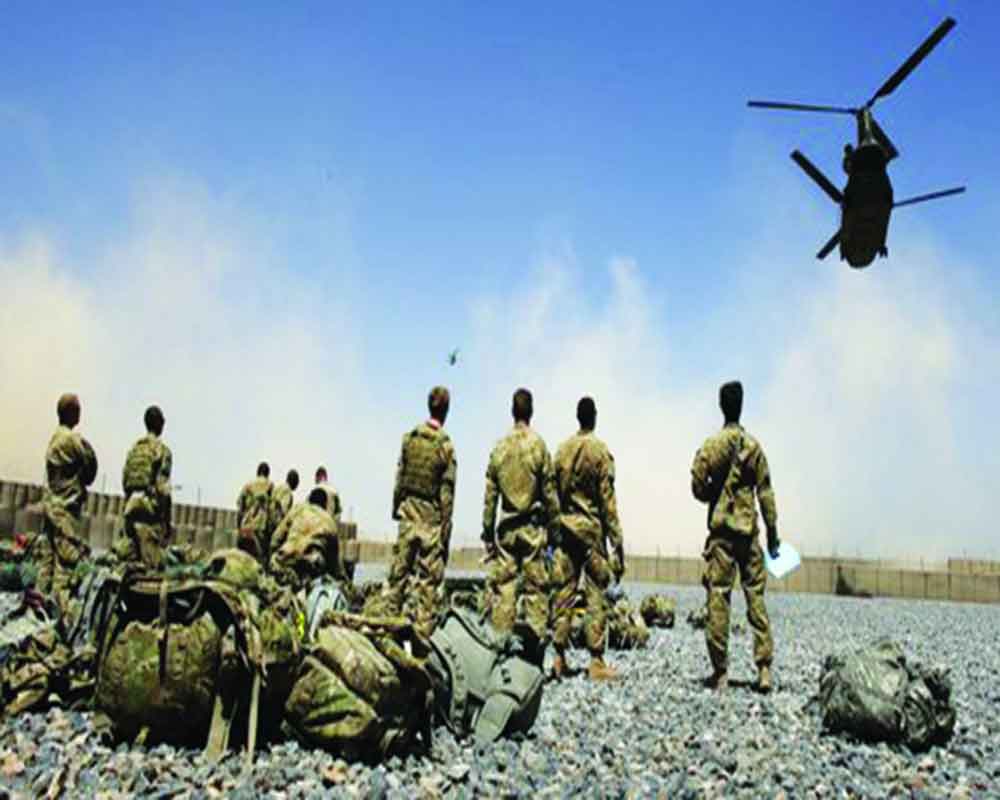 The POTUS, who managed five draft deferments from going to Vietnam, is again found wanting in his treatment of the US soldier in Afghanistan

Joe Biden is the 46th President of the United States, but not one of the 29 who served in the military, in some capacity. He had managed five draft deferments from going to Vietnam and equivocated on the Vietnam War per se, whilst politically opposing Richard Nixon’s conduct of war. This flip-flop of positions was visible in Biden asserting that he was against authorising the Iraq War in 2002 as he was supposedly “against it from the moment it started”, whilst contradicting himself with his vote for the Authorisation for Use of Military Force (AUMF) for the invasion, as the Chair of the Senate Relations Committee. Later, a chance duel against a decidedly racist, sexist and xenophobic Donald Trump (who clownishly and dangerously sought to usurp the imagery of the US military) ensured that Biden was sworn in as POTUS and, therefore, Commander-in-Chief of its Armed Forces. Clearly for many Veterans who traditionally supported the more rightwing Republican Party, Biden was the better of the two bad choices.

For a persistently combat-engaged nation with approximately 19 million Veterans as per the Department of Veteran Affairs, representing nearly 10 per cent of the total US adult population — the opinion of the ‘Uniformed’ fraternity matters. Biden frequently invoked the memory of his late son in his presidential campaign, Beau Biden, who served and rose to the rank of Major in the Judge Advocate General’s Corps. Beau tenanted Iraq from 2008 to 2009 and received a Bronze Star for his services. Biden’s “sacred obligation” campaign towards military families entreated that sentiment, “As parents of a service member who was deployed to Iraq, Vice-President Joe Biden and (Dr) Jill Biden understand that it’s not just military members who sign up to serve our nation, their families do too.” Meanwhile the ham-handed approach of Trump, including upsetting the Chairman of the Joint Chiefs of Staff, General Mark Milley, as also respected Veterans like Generals James Mattis and HR McMaster, swung the mood in favour of Biden — aided immeasurably by Trump’s guffaws and derelictions.

Today, over eight months as the POTUS, Biden has taken one substantial decision in the militaristic realm, ie, withdrawal of US troops from Afghanistan and his consequential approval ratings have plummeted. While ending the 20-year war in Afghanistan was much sought after, the unheroically defeated and hurried manner (with the casualty from the ISIL-K attack) in which they withdrew has diminished the image and perceptions of the US military, externally and internally. Comparisons of a Vietnam redux are inevitable and odious, and it is only the Veteran who will pay that ignominious price and humiliation over time. Despair is magnified by the unfiltered reality of having amateurly underestimated the speed of collapse, the obvious lack of an operational plan and the embarrassment of having to take permission from the ‘enemy’, ie, Taliban, to ‘evict safely’. Unlike the militarily uninitiated and unconcerned politicos, the US soldier will suffer the additional and unimaginable moral injury in the know of what it has left behind in terms of allies (interpreters, drivers and support staff), and the sure fate that awaits them. The chaotic and mismanaged departure has left the uniformed fraternity pained, frustrated and shamed, and the blame is coming understandably on the POTUS.

Seemingly, Biden cannot seem to get much right with the ‘uniformed’ sentiments as he was seen disrespectfully checking his watch as casket after casket appeared during the somber “dignified transfer” ceremony for the 13 fallen US troops who were killed at the Kabul airport.

Many also commented on the inappropriateness of the President repeatedly invoking his late son’s name, instead of that of those who had actually fallen under his watch. Many family members of the fallen soldiers refused to meet the President, while some others who did so, did some plain-speaking to his face. The mother of one called Biden “a dementia-ridden piece of crap who doesn’t even know he’s in the White House”. Importantly, it is not a partisan divide as many of these families have equally slammed Donald Trump’s ill-timed opportunism in politicising the soldiers’ deaths, with many calling it “without honour”, “disgusting” and “gross”.

Trump with his patent cattiness has sought to spin grieving families predatorially into dangerous territory — insincere and qualified as his support always is, only to those who back him politically, and smearing those who don’t, like the Gold Star family of Captain Humayun Khan. The political tooling of the military is increasingly irresistible in democracies across the world with unwarranted usurpation of the narrative, parading and milking of raw emotions towards electoral harvest — even mature democracies like the US are prone to it.

In an unavoidably comparative sense, most Veterans know that the Commander-in-Chief requires selfless devotion to constitutionality, restraint, depth of character and principled leadership — and, therefore, they may still back Biden over Trump, but the recent handling of Afghanistan has led to the rightful questioning of Biden beyond partisanship. In the world of professional ‘uniform’, winning a “just war” is important and, if not that, then going down fighting with valour and dignity is the only other option — in Afghanistan, neither of the two was achieved, and the slip is clearly showing for Biden amongst the fraternity. He must be put to question, beyond partisan preferences.