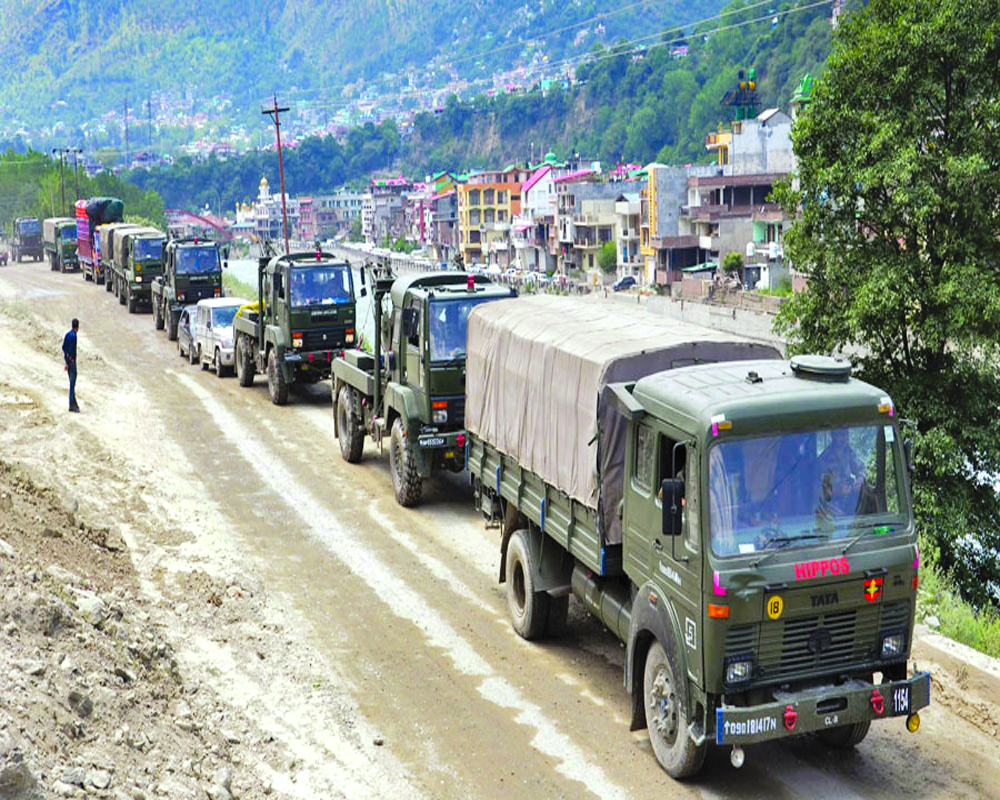 Defence Minister Rajnath Singh’s recent statement in Parliament on the disengagement of forces in Eastern Ladakh, on the heels of a statement on similar lines by the Chinese Defence Ministry, caught most media observers and analysts by surprise. The way events were otherwise moving had suggested that we were in for what could only be a long hot summer, which still remains a remote possibility given past Chinese duplicity. There can still be many a slip between the cup and the lip as the contentious issue of the People’s Liberation Army’s (PLA’s) transgressions in the Depsang sector and other friction points is yet to be discussed, let alone resolved to mutual satisfaction.

The statements emanating from official sources suggest that either both sides are keen to de-escalate matters, or that we have conceded ground to the Chinese. Either way, the chances of an armed conflict have receded substantially, which is undoubtedly a good thing. A conflict at this time would cause immense damage to our economy, already reeling under the impact of the pandemic and the earlier ill-considered and poorly implemented demonetisation. More importantly, we cannot brush aside the simple truth that our Armed Forces have been deliberately neglected over the past two decades, a situation that remains unchanged if one looks at the new Budget. As a consequence, their capabilities have been greatly impaired.

In the event of a conflict, while they may still be able to force a stalemate, it is unfortunately not a certainty given the unpalatable fact that China is the dominant power in the region with a larger and better-equipped military. The possibility of Pakistan’s involvement, either directly or indirectly, in such a situation would only add to our woes. Undoubtedly, the response and resolve displayed by our Government and the military after the initial setback was commendable and caught the Chinese unawares and unprepared. The subsequent occupation of dominating heights on both banks of the Pangong Tso, including along the Kailash Range, was a brilliant strategic counter and made the Chinese even more uncomfortable.

From these heights, our forces were in a position to interdict and destroy the PLA’s troop and armour concentrations in the Spanggur Gap, their defensive positions along both banks of the Pangong Tso. It also gave our forces the option to capture their administrative and communication hub at Moldo and cut off their major lines of communication further in depth, if the necessity was felt. Most importantly, it stalled any hope that the PLA may have had of offensive action along this flank as any attempt to clear these heights would impose excessive cost in terms of manpower, casualties and time. Incidentally, one cannot help but wonder as to why these heights have not been held all these years? Especially since they are well within our territory and our hold on them has never been disputed.

Therefore, given their strategic import, one is at an utter loss to understand as to why our withdrawal has been linked to the PLA’s withdrawals only from the Pangong Tso sub-sector and not the other sub-sectors. Suggestions in the media from official sources that by doing so the PLA has been forced to remove structures that it had constructed along the north bank of the Pangong Tso, cut no ice. It is a no-brainer that the north bank is of only limited tactical value and wholly unsuitable for progressing major operations, especially as long as the dominating heights on the Kailash Range are held.

In these circumstances, one cannot help but conclude that our military commanders have acquiesced to militarily unsound directions from our political leadership. We have seen this before, be it our withdrawal from the strategically important Hajipir Pass after the Indo-Pak war of 1965 or the refusal to allow our forces to cross the LoC during the Kargil conflict that resulted in avoidable casualties.

Unfortunately, this Government set a precedent in the manner it dealt with the confrontation with the Chinese at Doklam in 2017, where it forced the PLA to stop road construction and back down after a 73-day standoff. However, following Prime Minister Narendra Modi’s meeting with President Xi Jinping at Wuhan, the PLA circumvented the standoff area and continued with its road construction on the Doklam plateau, unhindered by our forces. This road now allows the PLA access to the foothills of the Jampheri Ridge, overlooking the strategic Siliguri Corridor linking Assam and the North-eastern States to the rest of the country, giving the PLA an option to interdict our lines of communication.

What is worse, the Government then ensured that these facts were kept out of public discourse. With the general elections due in a few months, it raised suspicions that this was done to ensure the BJP’s chances of victory were not compromised by these embarrassing revelations. One is now struck by a feeling of déjà vu as important State elections are due in a few months and what appears to be a repeat of the modus operandi. Let us hope, for all our sakes, that this is not so! Only time will tell.