Make the COVID jabs free for everyone

Make the COVID jabs free for everyone 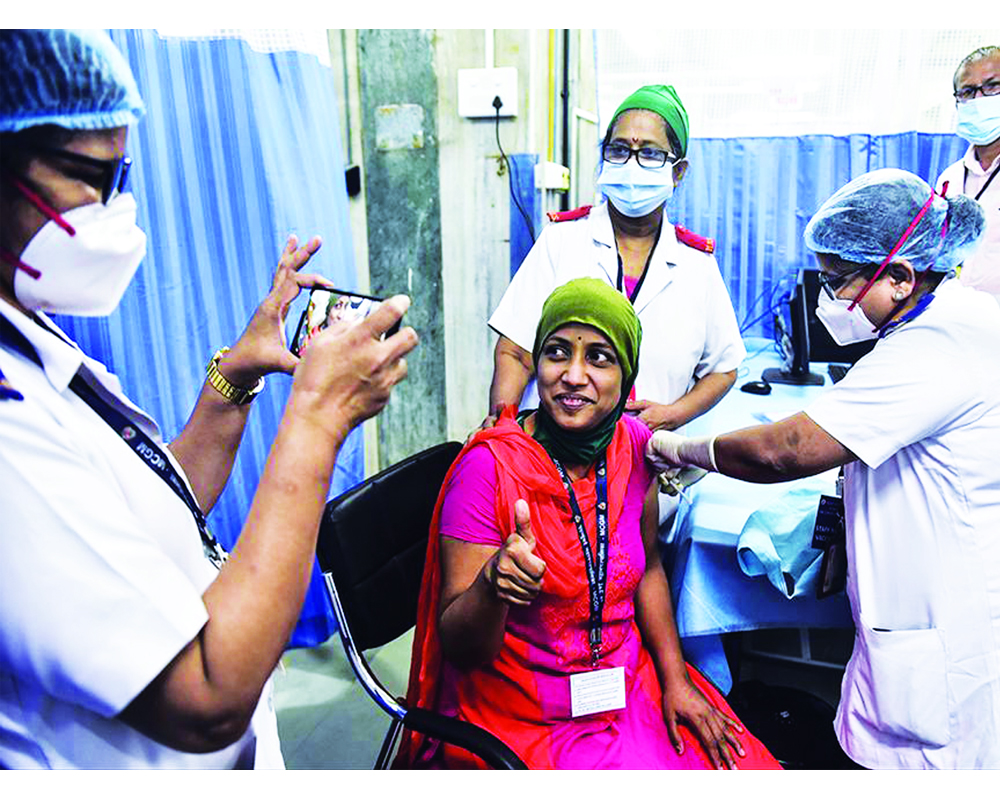 There is a dire need to vaccinate at least one billion people within a short time and, given the pitfalls of differentiated pricing, the Centre should opt for inoculating everyone free of cost

Under the ‘Liberalised Pricing and Accelerated National Covid-19 Vaccination Strategy (LPANCVS)’, announced on April 19, which was  kicked off from May 1, the Centre  has plans to vaccinate all adults above 18 years of age. Before this, the inoculation drive that was launched on January 16, covered healthcare and frontline workers and people above 50 years of age and those with comorbidities. In the second phase of the drive the age limit was brought down to those above 45. Vaccine manufacturers were giving all their supplies to the Government of India (GOI) and charging Rs 150 per dose even as the latter was arranging for inoculation of eligible people free at Government vaccination centres (GVCs). However, those opting to get vaccinated at private hospitals needed to pay Rs 250 per dose. The GOI incurred a subsidy on vaccination done at GVCs equal to Rs 150 per dose, plus the cost of administering it. It was funded from the Union Budget.

Even as the above arrangement involved differential pricing, like free for those who got vaccinated at GVCs and others getting the jab at private hospitals for a price, the proposed system from this month is much more complex. Under it, of its total supply, the vaccine manufacturer would give 50 per cent to the GOI at the rate of Rs 150 per dose and make the remaining 50 per cent available to State Governments, private hospitals, industrial establishments at a price to be declared in advance (the price charged for vaccination by private hospitals would be monitored). People can make an “informed” choice at the time of booking an appointment at a private vaccination centre.

The vaccines will not be available for sale at pharmacists or chemist shops in the open market. The present system of private hospitals inoculating those above 45 years for Rs 250 per dose will cease to exist as they will no longer be getting any supplies from the GOI quota and will have to procure directly from vaccine manufacturers at the price notified by the latter.

Putting all pieces together, there will be a minimum of five prices for the Covid-19 vaccination dose i.e. zero, Rs 300, Rs 400, Rs 600, Rs 1,200 (the cost to the recipients will be higher by an amount equal to the “service charge” levied by the State Governments/private hospitals to cover the cost of administering the vaccine) depending on the vaccine type and the channel through which it is done.

Meanwhile, more vaccines like Sputnik V, Nasal Covaxin and so on, are are expected to get approval shortly. But those are likely to be priced even higher.  The earlier arrangement was far from optimal as it entailed differential treatment of eligible people depending on the place they got the jab. While, those going to GVCs got it free, others opting for private hospitals paid Rs 250 per dose. Even as the involvement of private hospitals was justified in view of the need to cover a large number (there are 300 million in the 45 plus group) within a short time frame, putting a price tag to it and that too Rs 100 over and above the price they paid to  manufacturers militated against this objective. Indeed, this was a potent factor behind dismal results thus far with only about 20 million in a total of 300 million having got both the shots (even as other factors such as the initial vaccine hesitancy among the public at large as also supply constraints were equally responsible).

Under the new regime, even as the facility of getting a jab for Rs 250 per dose at private hospitals for persons in the 45 years plus category has been withdrawn, the Central Government wants over 500 million people (50 per cent of about one billion of the adult population i.e. over 18 years whom it expects to get jabs from States and private hospitals’ quota) to pay a price high enough to destabilise the budget of even a middle income family.

Consider the following two scenario: First, let’s take the lowest in the price spectrum i.e. Covishield — supplied for Rs 300 per dose to States. Add service charge of Rs 200 per dose (67 per cent of the price; this is the mark-up applied to Rs 150 per dose being the price billed to private hospitals under the erstwhile dispensation), the recipient will pay Rs 500 per dose. For two doses, this comes to Rs 1,000. A family of four will have to shell out Rs 4,000.

At another extreme, consider Covaxin supplied for Rs 1,200 per dose to private hospitals. Plus service charge, the recipient will pay Rs 2,000 per dose. For two doses, this will be Rs 4,000. In this case, the dent on this family’s budget will be Rs 16,000.

Given the high prices at State centres and much higher at private hospitals and considering that vaccination from the GOI quota (50 per cent of total supply) is for free, people will tend to gravitate towards the latter. The clamour for getting vaccinated at GVCs will be so pronounced as to cause a complete breakdown of this network. This could be averted if only the State Governments decide to do free inoculation even out of the paid quota; however, this will require them to give heavy subsidy from the State Budget.

Already, some States like Maharashtra, Delhi and so on have announced their intent to give it all free and others are likely to follow suit. If, it has to be free for all involving subsidisation by the Centre or States then why go through such a cumbersome route?

Considering that the crisis is of an unprecedented magnitude (once in a lifetime) afflicting the entire population, there is a dire need for vaccinating at least one billion within the shortest possible time frame and given the pitfalls of differentiated pricing, the Centre should opt  for inoculating everyone free of charge.

Apart from GVCs, all other stakeholders like the State health facilities, private hospitals, industrial establishments and so on should be involved in the vaccination drive. They can pick up their requirements directly from the manufacturers even as the GOI does overall coordination, negotiates a good price and makes payment.

Given the mammoth numbers i.e. two billion doses, a price of Rs 200 per dose should be good enough to cover the cost and give good return to the manufacturers (here, it is pertinent to recall a statement by Adar Poonawalla, CEO, SII, “the firm was making a profit even at a price of Rs 150 per dose”). The cost of purchase i.e. about Rs 40,000 crore can be met from the allocation of Rs 35,000 crore made in the Union Budget for 2021-22 (an additional Rs 5,000 crore would be needed to make up for the deficit). As for the “service charge” for vaccination, this cost may be paid by the States from their Budgets.