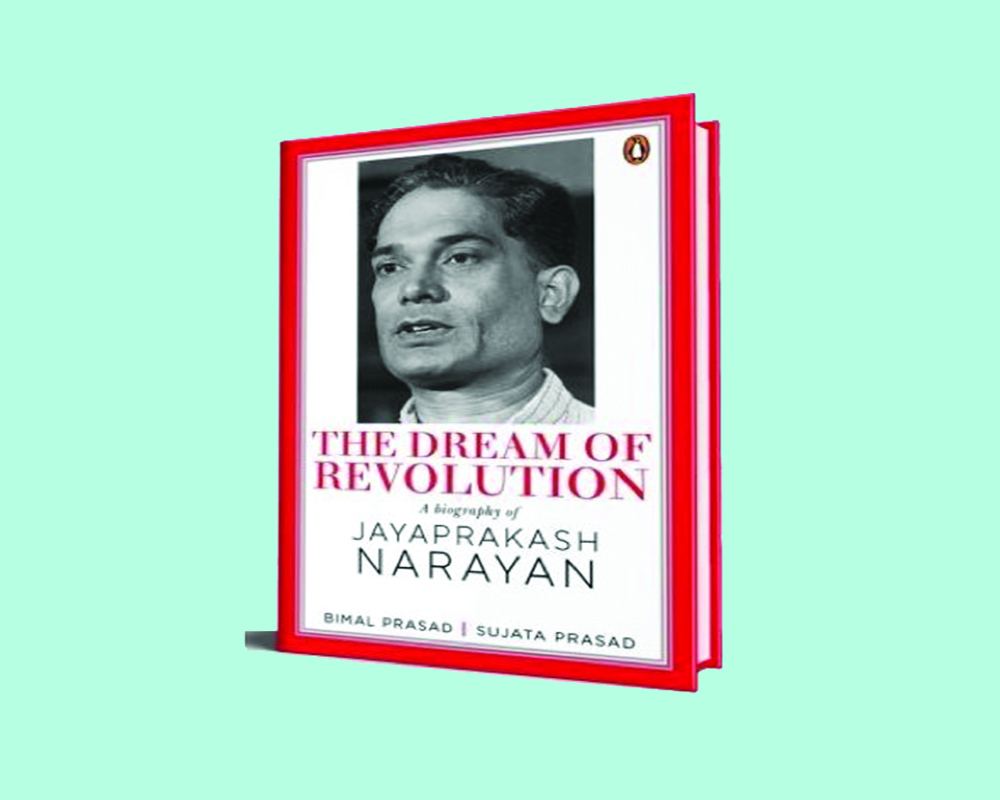 Jayaprakash Narayan (popularly called ‘JP’) was one of the most charismatic leaders of India. He represented a rare confluence of selflessness and courage of conviction. In his Marxist years, the followers saw JP as ‘Lenin of India’ after the Quit India movement of 1942. In the evening of his life, students and youth conveyed their admiration by calling him ‘Loknayak’.  It is due to his unparalleled roles in Indian politics and society for five decades from 1930s to 1979 that the life-journey of JP continues to provide a fascinating narrative across generations of activists and scholars.

At the same time, it has been a perplexing fact that Jayaprakash was always perceived in contradictory ways. For example, Acharya Vinoba Bhave and other Sarvodaya associates called him a saint , while DK Barooah, the president of Congress (Indira) characterised him a fascist with corrupt supporters.

‘The Dream of Revolution - A biography of Jayaprakash Narayan’ by Bimal Prasad and Sujata Prasad (2021, Gurgaon, Penguin Random House) is an outstanding book about a worshipper of freedom and revolution for at least four reasons. First of all, the father (an eminent academician) — daughter (a distinguished senior bureaucrat) team, representing two different generations and two different orientations, knew JP intimately for decades.

Secondly, it contains distillation of several volumes of works about the ideas and initiatives of JP in a readable book of just ten short chapters. Thirdly, it addresses some of the most controversial aspects of JP’s ideas and initiatives with several authentic texts and letters. Finally, it signifies the inter-play between a) the teachings of Gandhi and Vinoba; b) politics of Jawaharlal Nehru, the socialists and Indira Gandhi; and c) changing imperatives of democratic nation-building in shaping the lives of Jayaprakash and Prabhavati.

The book is worth reading because the two authors have set an admirable example of objectivity and self-restraint. They have not shied away from a critical assessment but remained quite moderate when it comes to discuss the qualities of JP in comparison with other historians.

Reading ‘Dream of Revolution’ was an illuminating experience for an activist of the JP movement days like me as it is not a hagiography of ‘Bharatratna Loknayak Jayaprakash Narayan’. It is a well-documented life-story of JP — the rebel-extraordinarily written in a unique style where often just a single sentence evokes a few hundred images. Let me present a few examples of the power of prose from this book. Here are three such lines from three separate chapters about his socialist politics days: 1) ‘One of the most trenchant critiques of Jayaprakash Narayan’s politics came from his wife Prabhavati.’ (Ch. 4, p. 53); 2) ‘Jayaprakash viewed the transition to socialism not a straight road, but a tangle of conflicting paths.’ (Ch. 5, p. 83); and 3) ‘The recriminatory atmosphere in party meetings singed Jayaprakash.’(Ch. 6, p. 113).

Here are three other sentences about his orientation towards some systemic challenges: 1) ‘Jayaprakash’s utopia was not predicated on the idea of party-less democracy alone, but on a new kind of economic structure based on voluntary limitations of wants.’ (Ch. 7, p. 131); 2) ‘Through the rumble of history and politics, Jayaprakash’s life oscillated constantly between the quotidian and the monumental — and that’s what makes it so special.’ (Ch. 7, p. 143); and 3) ‘Stripping away the accretions of myth enveloping the Naxalite movement, Jayaprakash argued that the ground for violence was prepared by persistence of merciless exploitation, chronic poverty and accumulated injustices.’ (Ch. 8, p. 156).

Now we can move to read similar power-packed lines about the most crucial period just before hisepoch-making leap for ‘Total Revolution’ (1974): 1) ‘Indira’s carefully drafted reply to the issues raised by Jayaprakash was patient, conciliatory, even a little wistful.’ (Ch. 8, p.167);  2) ‘One wonders if a sense of dread shot through Indira upon Prabhavati’s death. For with her death, the voice of moderation in Jayaprakash’s life also died.’ (Ch. 8, p.169); and 3) ‘The year 1973 closed not with a revolution but certainly the intimations of one.’ (Ch. 9, p. 170).

Let us conclude this exercise by underlining a few examples from the last two chapters — ‘Hope in Dark Times’ (Ch. 9) and ‘The Death of a Dream’ (Ch. 10): 1) ‘November 1974 was a definitive month in the history of the movement.’(p.185); 2) ‘Friends of Jayaprakash and Indira tried to bring about a truce, but failed.’ (p.187); 3) ‘It took some amount of persuasion to coax Jayaprakash back to Delhi to champion the anti-Indira front.’ (p. 195); 4) ‘Indira handed over control to Sanjay and his hand-picked cabal of pugnacious bullies.’ (p. 196); and 5) ‘As the storm clouds gathered, no one bothered to seek Jayaprakash’s opinion. In a sense, it was history repeating itself, with his predicament not very different from Gandhi in 1947.’ (p. 215)

It is important to alert that after getting to know JP with help of this contribution of Bimal Prasad and Sujata Prasad, a concerned reader may be tempted to ask why there has been such unfair portraying of gentle Jayaprakash by a number of highly influential people. Why was he labelledas a person with ‘woolly thinking’, a confused mind leading a frustrated life,’ hazy, naive, and unrealistic thinking’, ‘a poor judge of Indian politics and politicians’, giving respectability to Hindu communal forces, and head of forces of counter-revolution.

In any case, the evaluation of JP by the father-daughter team is close to the mesmerizing description of Sisyphus by Albert Camus. Sisyphus (a rebel in the Greek mythology) was condemned by gods to roll a rock up to the top of a mountain, only to have the rock roll back down to the bottom every time he reaches the top. But did Sisyphus smile when he reached the top with the rock? I have seen our Sisyphus smiling without pride of power or arrogance of success before passing away to become undeletable part of the collective memory of the people of India.

(The writer is a retired professor of sociology at Jawaharlal Nehru University. The views expressed are personal.)