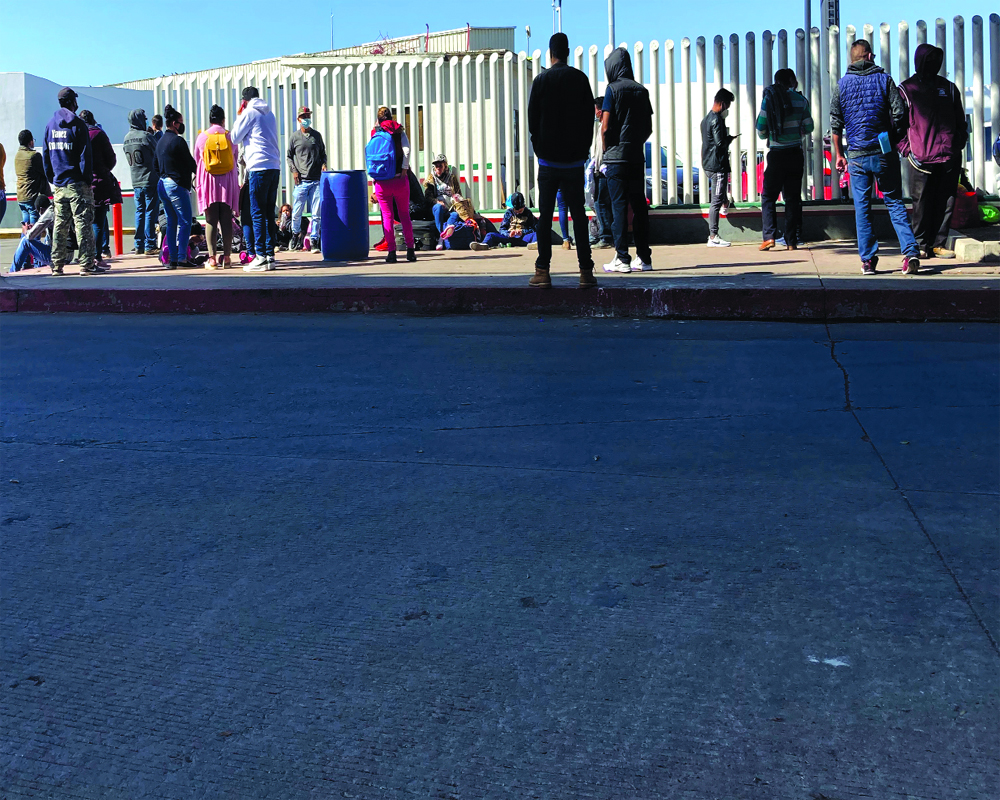 There is a vociferous demand for the immediate dismantling of the inhuman Migrant Protection Protocol introduced by the then Donald Trump Administration. Though it is not a cakewalk as the fault lines of the 21st century America have been laid bare, President Joe Biden has taken initiatives.  Maybe, the new US Administration wants Biden to tread carefully

Although Donald Trump left the White House on January 20, some of his policies like the crucial Migrant Protection Protocol (MPP) remain a “choke point” for thousands of migrants awaiting entry into the US.

The Trump Administration is formally gone, but the shadow of Trumpism has perpetuated. Both critics and fans of Trump agree on the fact that Joe Biden has inherited a largely “Divided America”. Although the Biden Administration has tried to reposition America at the heart of globality, the wounds of the Trump days would take longer than what Biden and the liberals are expecting.

The MPP is a US Government action whereby citizens and nationals of countries other than Mexico arriving in the US by land from Mexico, whether or not at a port of entry, may be returned to Mexico, pursuant to Section 235 (b) (2) (C) of the Immigration National Act (INA), while their US removal proceedings are pending under Section 240 of the INA. But the Government of Mexico has committed to providing aliens place into MPP with appropriate humanitarian protections, including immigration documentation and access to education, healthcare and employment.

In fact, the Section 235 of the INA addresses the inspection of the aliens seeking admission into the US and provides specific procedures regarding the treatment of those not clearly entitled to admission. Further Section 235 (b) (C) (2) provides that “in the case of an alien… who is arriving on land, (whether or not at a designated port of arrival) from a foreign territory contiguous to the US, the Secretary of Homeland Security may return the alien to that territory pending a removal proceeding under Section 240 of the INA. But individuals in such removal proceedings have the ability to seek relief or protection from removal, including asylum.

Further, the aliens who are granted relief from removal including asylum will be allowed to remain in the US, consistent with the existing laws and policies.

The origin of the MPP goes back to December 2018. On that very month, the Trump Administration announced the creation of a new programme known as ‘Migrant Protection Protocols’ (MPP). It’s often referred to as the “Remain in Mexico”. Under the jurisdiction of the MPP, individuals who arrive at the southern border of the US i.e. US-Mexico Border and ask for asylum, (either at a port of entry or after crossing the borders between the port of entry) are given notices to appear in immigration court or sent back to Mexico. Meanwhile they are instructed to return to a specific port of entry on a specific date and time for their next court hearing.

However, the MPP is different from another process regarded as “Metering”. Under Metering, it takes months for migrants before they are even allowed to approach US border officials to just start the process of asylum. The waitlist of these migrants are managed by themselves and by local shelters or Mexican authorities. Finally the US Government only decides how many people are allowed to request asylum each day. But the disheartening fact is that on some particular days, the US officials do not call anyone for processing their applications in certain locations. This uncertain wait today is prolonging and the migrants have to experience the worst of the tragedies at times.

It is worth noting why America has introduced the MPP. During the Fiscal Year 2019, America encountered a security and humanitarian crisis in its South West border when nearly one million migrants who entered the country illegally or without proper documentation were apprehended or encountered by the US Customs and Border Protection (CBP). Therefore, to address this imminent crisis, the Trump Administration used all appropriate resources, and authorities to secure the borders, enforce immigration and customs laws, facilitate legal trade and travel, counter traffickers, smugglers and transnational criminal organisations and finally to interdict drugs and contraband. Thus to restore the normal process of safe and orderly immigration, and to reduce incentives for aliens to try illegal entry methods and to make meritless case for entry or removal from protection, the legislation called the MPP was brought into practice.

Migration, to be precise, is an unending process. Since time immemorial, people have moved from one part to the other parts of the globe, either looking for a better life or to escape adversities in life. With globalisation, the process of migration has become easier, better and transparent.

The first World Migration Report was released by the International Organisation of Migration (IOM), a UN agency, in the year 2017. A lot has happened since then across the world. In the last two years, the world has witnessed historic changes at the international level: the member states of the UN have come together to finalise two global compacts on the international manifestations of migration and displacement, which are: a) Global Compact for Safe, Orderly and Regular Migration and b) Global Compact on Refugees.

The finalisation of these two historic compacts is the result of sustained efforts brought by states, international agencies, human rights bodies, civil society organisations, and even private actors to improve how the process of migration is governed at the global level. All these actors demand a safe, humane and affordable process of migration.

Today, what is happening to the thousands of migrants at the US-Mexico border is drawing the attention of the entire world. Most of these migrants are coming from the Central American countries such as Honduras, Guatemala, El Salvador, etc. The steady flow of immigrants leaving these North Central American countries simply reflect the grim realities of life for millions of children and their families. The root causes of this pervasive migration are manifold: crushing poverty, endemic crime, environmental crises, gang-related violence, extortion, high rates of domestic violence, sexual abuse of girls and forced recruitment in various street gangs. Besides, many of the horrific tales of migration are accompanied with the realities of scarce social services and very limited opportunities to learn or to earn a decent living. Hence millions of migrants from these countries keep migrating to the US each year and they face insurmountable risks to their lives on this long road.

There is demand from some sections of liberals that the Biden Administration should immediately dismantle this harsh piece of legislation introduced by his predecessor. But, will he be able to do it? At the moment, Biden is trying to undo some of the critical decisions taken by the Trump regime in the last four years.

However the MPP is a very sensitive legislation. January 29 marked the second anniversary of the MPP. The asylum seekers and advocates of migration across America are using this occasion to call for an end to this controversial law. To them, this MPP has prevented thousands of people from accessing a meaningful and safe opportunity to seek asylum in America. They are blaming Trump’s poor vision and blaming him for destroying the very image of a liberal and democratic America of the yesteryears built by the founding fathers of the American Constitution. And these anti-MPP activists say that the legislation is a clear violation of the due process and violation of universal human rights. Since March 2020, the US Administration has suspended all MPP hearings because of the Covid-19 pandemic.

During the Trump era, his administration continued subjecting people to the programme without knowing when their cases could be heard in the court.

On Biden’s first day in office, the Department of Homeland Security immediately announced that it would stop placing new asylum seekers into the MPP. This may be a critical first step in that direction, but it simply fulfils his election promise to end the programme. However, the latest report say that even Biden’s White House is indicating that it is not the time to rush. An orderly immigration protocol would certainly take time. To dismantle Trump legislations may be easy, but the truth behind many of these laws and regulations reveal many fault lines of 21st century America. And Biden needs to tread carefully.