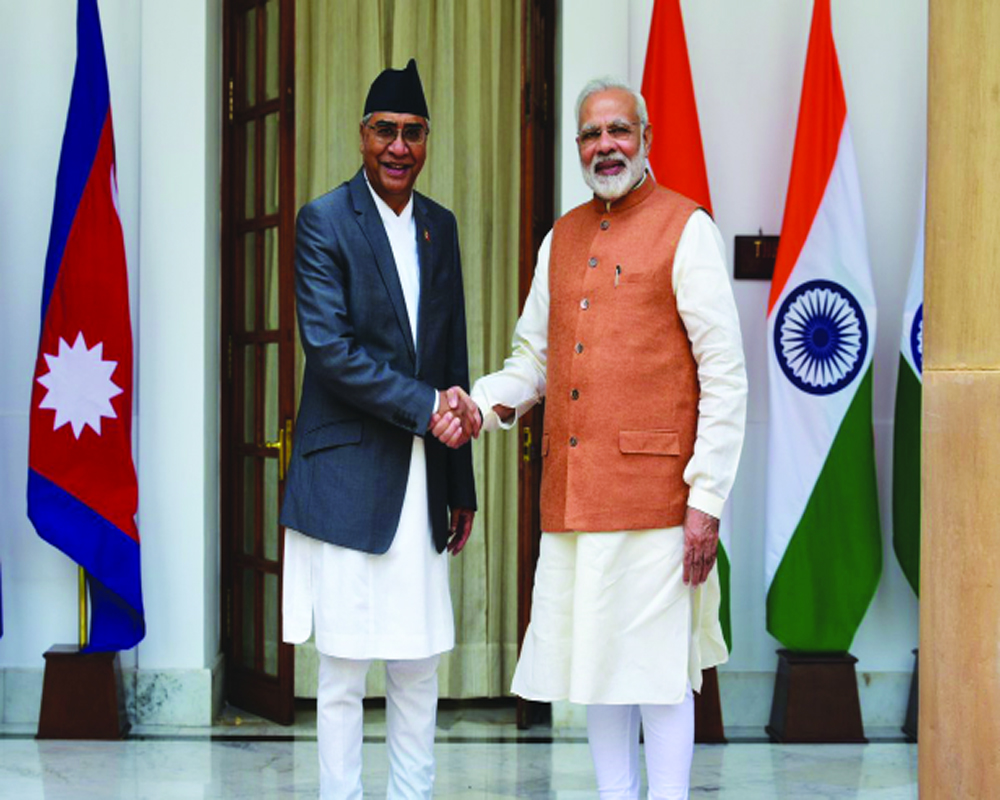 Amid the gloom and pessimism in India-Nepal relations in the past five years, the two countries seem to be moving towards a reset in bilateral ties. Since taking office in July 2021, Prime Minister Sher Bahadur Deuba, along with his Cabinet members, has been making efforts to reach out to the leadership in India and resume the talks in several sectors, including railways trade, hydropower, culture and COVID-19. In reciprocation, India has also welcomed the Nepalese rapprochement.

Among immediate efforts in resuming the talks, India has assured the supply of COVID-19 vaccines to Nepal as it prepares to lift the ban on the export of vaccines. In terms of political exchanges, a special delegation of the ruling Nepali Congress Party arrived in New Delhi on October 8. The delegation held meetings with External Affairs Minister S Jaishankar and BJP president JP Nadda. The delegation’s visit comes in the backdrop of the visit of Vijay Chauthaiwale, who heads the foreign affairs department of the Bharatiya Janata Party (BJP), to Kathmandu in August this year.

Chauthaiwale’s visit to Nepal was among the various efforts of the ruling BJP in improving ties with India’s neighbourhood, including in Nepal. In the 2014 and 2019 election manifestos, the BJP categorically mentioned ‘Neighbourhood First” as India’s foreign policy vehicle to improve ties with its neighbours. While the Government-to-Government level interactions are ongoing, the BJP has been an ardent advocate of the party-level interactions in reaching out to India’s neighbours to promote cooperation, cohesion, democracy, and human rights.

The Backdrop: From September 2015, bilateral relations between India and Nepal have touched a new low due to an ultra-nationalist outlook sported by former Prime Minister KP Sharma Oli concerning the Constitution, and the border dispute with India. These issues had become the only issues of prominence for KP Oli as it served his political agenda. Despite looming political instability and an immediate emergency challenge of COVID-19, Oli ensured that the age-old ‘small state’ card was put to use against India. Traditionally, India and Nepal have resolved their misunderstandings through well-established bilateral diplomatic channels at the Foreign Secretary-level, but Oli was least interested in using confidence-building measures. From 2015 onwards, Oli had left no stone unturned in creating an anti-India narrative and sponsoring anti-India social media tool kits like #BackOffIndia and #GoBackIndia.

Asserting Against Chinese Encroachment: Oli had willingly ignored reports on China’s border encroachment of Nepalese territories in 2020. While Nepal’s Ministry of Foreign Affairs had been late in responding to India’s calls for border talks, Oli was too quick to refute allegations against China. The Nepalese media had taken up the issue of border encroachment by China after the Chinese side had reportedly built 11 buildings in a remote part of Humla district that Nepal claims as its own territory.

Against this, Nepal’s Foreign Ministry stated that “the Department of Survey, Government of Nepal, based on the official records, reports of the joint field inspection and boundary maps, has verified and confirmed that the said buildings are not located within the Nepali territory”. However, the current administration has taken up the matter with all seriousness. On September 1, 2021, Nepal’s Home Minister Bal Krishna Khand had formed a committee to study the border issue with China. The committee included the Deputy Director-General of the Survey Department, the Senior Superintendent of Nepal Police, SSP of the Armed Force Nepal and Joint Director of the National Investigation Department. The committee had submitted its report within 25 days, on September 26, despite geographical difficulties in the border region.

As per the recommendations of the committee, “it has been found that the Chinese side has put up wires and fencing in the Nepali territory”. Additionally, “the Chinese side was also trying to build a permanent canal 145 metres inside the Nepali territory. Accordingly, it wanted to build a road. After Nepal’s Armed Police Force’s objections, the structures were destroyed and the covered rubble was visible.” Noteworthy, the 1963 Boundary Protocol identify the area from pillar number 5 (2) to the middle of the Kit Khola as the international border between Nepal and China. China has reportedly fenced the area.

Hence, these encroachments by China violate the agreement. It shows that KP Oli had compromised in the matters of national security to achieve his political mandate. Nepal’s Home Ministry intends to take the matter with China through diplomatic channels. Amidst this, China’s unease with the change in Government in Nepal has been wide open. Within days of Prime Minister Deuba’s appointment, Chinese State media had tagged him as a “pro-India” leader.

Conclusion: Under-standably, Sher Bahadur Deuba has a short-term spell at hand as the Prime Minister, but these little steps in revamping Nepal’s foreign policy priorities will help to fill the vacuum left behind by KP Oli. On the other hand, although Nepal has taken the matter of China’s border enthronement very late, it is better late than never. The incumbent administration must ensure that China respects the sovereignty and freedom of Nepal by not allowing the latter to micromanage Nepal’s political affairs.