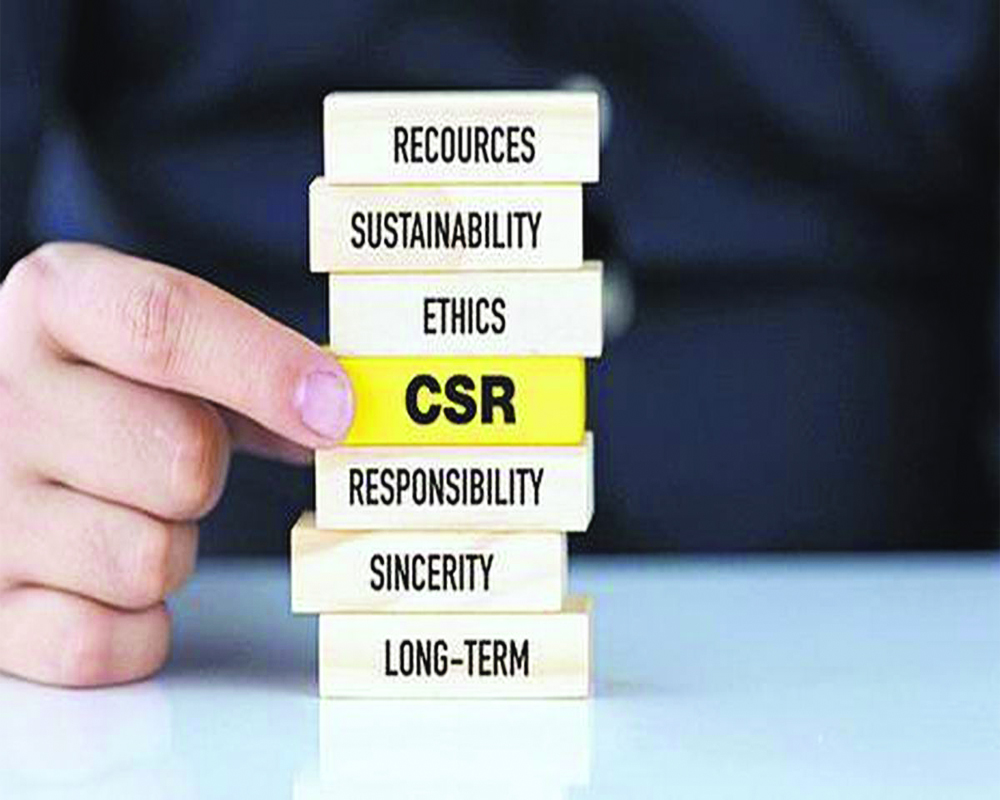 The social responsibility agenda now has a wider role in pandemic management, with the Govt expanding the scope of spending to include firms engaged in R&D of vaccines

Sustainability has been on the agenda for us for a while but it never piqued our minds so aggressively. COVID-19 has accelerated the adoption of sustainable practices as never before. It has taught companies that there can no longer be business as usual. We have been provided a once-in-a-generation opportunity to heal the environmental damage caused by overexploitation and unsustainable business practices. It is time now to press the reset button, build resilience and create long term value that is inclusive, equitable and sustainable.

We are seeing a growing realisation that businesses should play an active role in changing the world for the better. Hence, a great deal of money has been flowing into the social sector. Like individual citizens who have moral and social responsibilities, businesses are being perceived as corporate citizens who need to commit a part of their time, talent and resources for the welfare of society as they draw their sustenance from it. Corporate Social Responsibility better known by its acronym CSR is a business approach that aims at managing an organisation in a way that it contributes towards sustainable development by delivering social, economic and environmental benefits to all its stakeholders.

Corporate altruism in India has found a new purpose since the advent of the COVID-19 pandemic. With the nationwide lockdown upending economic activity on the one hand and disrupting lives, especially of the poor, on the other, companies have not only opened their purse strings but also rolled up their sleeves to respond proactively to the pandemic. Over the past few months, corporates have been using all or most of their CSR kitty to combat the outbreak, be it through contribution to the PM CARES Fund, other relief funds, distribution of food, masks, personal protective equipment (PPE) kits or relief material to the needy.

The CSR agenda now has a wider role in pandemic management, with the Government expanding the scope of CSR spending to include companies engaged in research and development (R&D) of new vaccines, drugs and medical devices. These amendments to the CSR rules permit such companies to categorise as CSR activity any Covid-related R&D activity even if it is undertaken as part of its normal course of business.

There have been two more policy changes; the first was to allow all donations for COVID-related efforts to be eligible for 100 per cent tax deduction. The second  allows firms who contribute over and above the minimum prescribed amount, to later offset the excess against the CSR obligation arising in subsequent years, if they so desire.

Corporate India has already suggested that the Indian Government approve use of CSR funds for vaccinating their employees. The recommendation came from the Federation of Indian Chambers of Commerce & Industry (FICCI) and Ernst & Young (EY), in a study titled ‘Protecting India: Public Private Partnership for vaccinating against COVID-19.’ The report avers that in order to have 1.3-1.4 lakh centres for inoculation, about 60 per cent of India’s existing public healthcare infrastructure will have to be converted into vaccination centres. The report also mentions how the public sector can potentially provide just about 60,000-70,000 healthcare inoculators, as against the minimum one lakh professionals needed.

CSR is the umbrella term for how a business relates to the broader cultural, economic and political environment in which it operates. It is one of the biggest buzzes in a corporate business, signalling that a company cares; and that it allies profit with principle. It addresses many areas such as corporate governance, human rights, health and safety, the environment, work conditions and contributions towards economic development. The overarching goal of CSR is to drive a change towards sustainability.

This phenomenon has given rise to a new crop of mega donors who are upending long-established norms in the staid world of big philanthropy. Not only are they increasingly willing to take on hot-button social and political issues, they also have a problem-solving and impact-making mindset rather than one focused on publicity.

The CSR movement began as a response to the prevailing opinion that businesses should play a role in ameliorating social problems due to their vast economic resources and overarching influence in the daily lives of people. Steel tycoon and one of the greatest philanthropists, Andrew Carnegie, whose business ethos was “to do well in order to do good” was one of the earliest advocates of the concept of CSR.

Businesses are powerful social entities and the most respected among them feel the need to do much more than making money. They believe in using the power of a business for solving tough problems that plague society. They are involved in a wide variety of causes, such as education, healthcare, skills training, entrepreneurship, women empowerment, food security, livelihoods and supporting services for the differently-abled.

India has a unique law — the Companies Act, 2013 and the CSR Rules — which came into effect on April 1, 2014. It is the first country to stipulate that the companies expend their resources on effective CSR programmes. The approved activities under Schedule VII of CSR include eradicating extreme hunger, poverty and promotion of education, gender equality and women’s empowerment as well as reducing child mortality, improving maternal health and combating diseases. Ensuring environmental sustainability and prompting employment enhancing vocational skills are other activities approved under CSR.

However, there is a crucial difference between CSR as understood in western countries and the way it is implemented in India. A generally accepted gold standard for CSR in the western world is that it must be closely integrated with a firm’s business strategy so that the programmes create a shared value for the company’s shareholders and its stakeholders. In India, that linkage is explicitly prohibited for CSR, focusing solely on its role of contributing towards societal welfare.

CSR could, however, be more socially relevant when it is driven by altruistic motives rather than a mandated policy obligating charitable actions. It is very difficult to legislate moral obligations. Laws set the minimum standards, but they do not create an impetus or ambience for a philanthropic mentality.

There are, unfortunately, marked aberrations in the CSR agenda which need a course correction. Many businesses harbour a variety of secondary aims and often use CSR for enhancing their social profile and boosting their business markets. Charity leaders have a geographic bias with corporations funding projects closer to their headquarters. Consequently, more remote regions where development aid is acutely needed are being bypassed by this new social revolution.

Despite all the hyperbole, the great economist Milton Friedman argued in the year 1970: “The doctrine of social responsibility is frequently a cloak for actions that are justified on other grounds rather than a reason for those actions.” There can be the subtle use of CSR to brush off a bad reputation as well as to camouflage any dark acts.

CSR has usually been peripheral in most organisations and it is not woven into the texture of the business. Even as annual CSR expenditure is on the rise, the impact on the ground remains a matter of debate. Further, it is not always necessarily transparent or mission oriented. Sometimes, it is driven by a need to improve the brand reputation and even worse, to act as a moral counter-balance for unethical practices.

However, a significant amount of any CSR expenditure comes with some strings attached — terms that dictate exactly where and how it must be used. While this may be appropriate in some cases fundamentally it reflects a serious lack of trust in the non-profit entities and hinders their ability to operate effectively.

When donors insist that their money should go exclusively to the people served, there is not enough money left for the non-profit entities to focus on building their own organisations. They are, therefore, unable to invest in talent, technology, systems or reporting. Reporting requirements are often an onerous administrative burden for voluntary organisations which have to devote their scarce skills to educated, English-speaking personnel for writing reports for the donors rather than running programmes.

A sincerely and honestly run charity always delivers rich dividends in the long run. That is the lesson we learn from both philosophers and business leaders. It is wise to remind ourselves of the advice of Henry Ford: “A business absolutely devoted to service will have only one worry about profits: They will be embarrassingly large.”

(The writer is a well-known development professional of international repute. The views expressed are personal.)