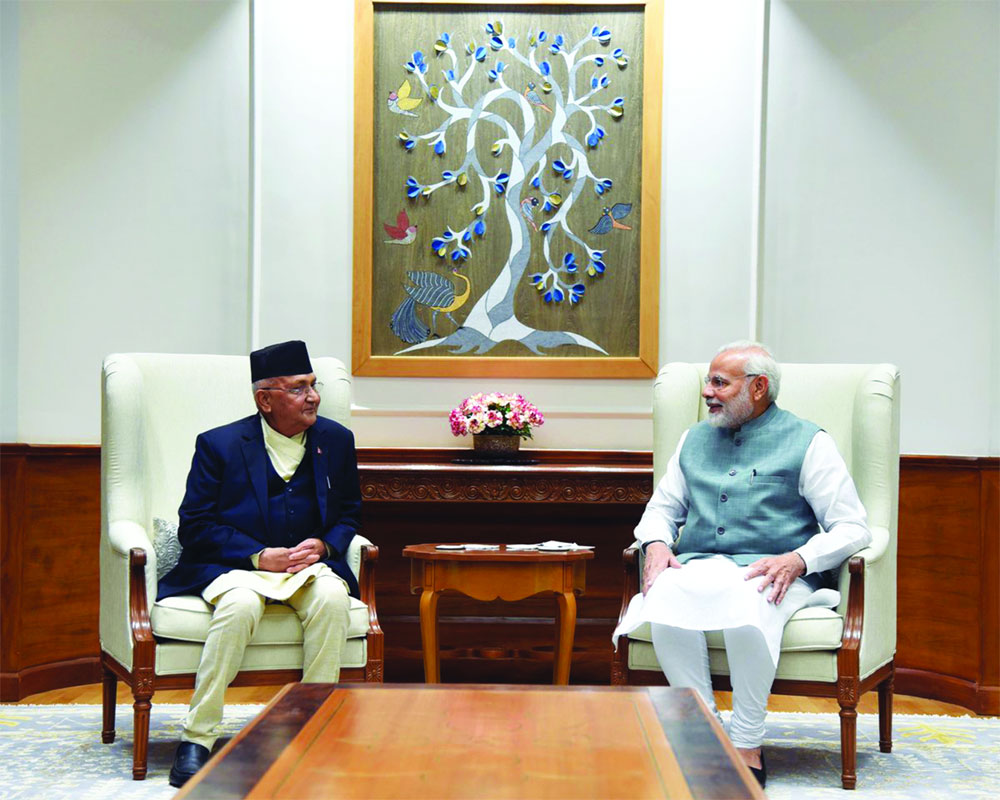 Foreign Minister Pradeep Gyawali is in New Delhi for the 6th Meeting of India-Nepal Joint Commission. The invitation was given before Nepal Prime Minister KP Oli, facing a revolt in his party, dissolved Parliament last month and ordered elections, making him the head of a caretaker Government. Oli shot to fame by winning an overwhelming mandate for the pro-China Nepal Communist Party (NCP) on an anti-India wave of ultra-nationalism and later bashing New Delhi with sundry charges, including territorial aggression and attempts at unseating his Government. In diplomacy there are neither permanent friends nor permanent enemies, only permanent interests. Oli decided to make up to India with friendly overtures to which India responded favourably, prompting Nepalis to speculate that the dissolution of the House might be at India’s behest and that China’s loss is India’s gain. Except that the validity of the prematurely terminated Parliament in which Oli enjoyed a majority is to be determined by that country’s Supreme Court and an “election Government” could be in place if and when the elections are held. So far, India has issued one official statement noting that the political developments are an “internal matter for Nepal to decide as per its democratic process”. Indian Ambassador Vinay Kwatra has met Government Ministers in Kathmandu to continue minimal engagement. Meanwhile, the majority faction of the NCP — led by co-chairs Madhav Nepal and Prachanda, who is also the new leader of the parliamentary party and other Opposition parties — is out on the streets challenging Oli’s “undemocratic” and “unconstitutional” dissolution of Parliament. Heavily invested in Nepal, China failed to secure a patch-up and unity in the NCP despite dispatching a Chinese Communist Party delegation to the Himalayan State.

The China-US rivalry in Nepal has been hotting up over the Indo-Pacific Strategy (IPS) and the related Millennium Challenge Corporation, both seen by the Prachanda-Nepal group as countering China and obstructing its Belt and Road Initiative (BRI). India’s border standoff and longstanding contestation with China makes it a natural partner of the US — rather the other way round in Nepal — turning the bilateral competition trilateral. The US has normally let India take the lead in Nepal and it has followed. Since its drubbing over mishandling Nepal’s Constitution in 2015 and the Kalapani row in 2019, India has remained hands off Nepal, especially after the NCP’s unassailable election victory in 2017. It was resigned for a full five-year term of the NCP, during which China was expected to consolidate its strategic gains. The long-simmering power-sharing dispute within the NCP, egged on by ego and ambition of its leaders, presented an opportunity for New Delhi to try and subtly reshape the political landscape. There is nothing immoral or sinful in preventing China from turning the tables on India as long as the game is played skilfully, and not clumsily as in the past. It is the first time during Nepal’s internal crisis that China is seen as the “great interferer”, not the usual culprit India, and what’s better is that there is no palpable anti-India sentiment.

The Oli Government is expected to be in office for some time before the Supreme Court delivers its verdict. New Delhi has secured a timely reconciliation with Oli who is pro-US, pro-IPS, pro-MCC and once India’s blue-eyed boy. His statement on Sunday in the National Assembly that “I want to be a real friend of India” has to be tested. Routine work and interaction between the Governments has to continue. Following King Gyanendra’s royal coup in 2004, India condemned the squashing of democracy by stopping all lethal military aid to the Nepal Army, which was fighting the Maoists, but soon it accepted the fait accompli and resumed bilateral business. India reported increased speed and efficiency in the interactions among Government departments and an Indian official had remarked: “Never achieved so much so fast!”

Nepal’s Supreme Court will decide today whether an extended full Bench or a constitutional Bench should hear the case. There is also a legal and moral issue in Chief Justice Cholendra Rana heading the Bench. Whether the House is restored or fresh elections held, the awe and might of the NCP will never be the same again. We may see two NCPs or the NCP could unravel into its previous avatars — the CPN UML and the CPN Maoist Centre. The division, it is noteworthy, has taken place more among the CPN UML (which has had three former Prime Ministers) than among the Maoists. The NCP has not split as neither Oli nor Prachanda want to be blamed for its bad optics. The Election Commission says that the Prachanda-Nepal faction, claiming to be the larger and original faction, has applied for ownership of the party’s symbol and name but it has not recognised the split as they are not registered as two parties. Despite the matter being sub judice, Oli has been publicly claiming that Parliament will not be restored even as four former Chief Justices have called the dissolution unconstitutional.

The primary mission now of the Chinese Communist Party and its versatile Ambassador Hou Yanqi is to prevent the formal split at all costs. Although both factions have spurned Chinese attempts to effect a compromise for the sake of party unity, Beijing’s wealth is a strong incentive for compliance. Still, while both the factions are China-leaning, the two separate entities of the NCP were also India-friendly. It was post-2015, and especially after 2017, that the Communist factions visibly tilted towards Beijing. During the civil war, the Chinese lampooned the Maoists as “hijackers of Mao’s fair name” and called them “mischievous anti-State rebels” till they rocketed into power, with China conveniently recognising ideological congruence between them.

After Prachanda was forced to step down as the Prime Minister in 2008, he admitted that initially he thought China was required to balance India but later realised that India was more important for Nepal. Former Prime Minister Madhav Nepal used to be jokingly called Madhav India. In the power games that were ritually played out in Kathmandu, New Delhi’s blessings were invariably sought. Beijing, though a late entrant, assumed primacy after India’s marginalisation.

A fresh election is the best case scenario for democratic forces, especially the Nepali Congress which could emerge as the single largest party as it did in 2013 after Maoists were routed. New Delhi should have sound relations with all the parties but, most of all, with the people of Nepal. Seasoned Nepal-watchers in India are warning the Government against entertaining the opportunistic Oli and his caretaker Government and let the Nepalese deal with the political mess they have created. In other words, India should be an idle bystander. This is precisely what China wants India to do.