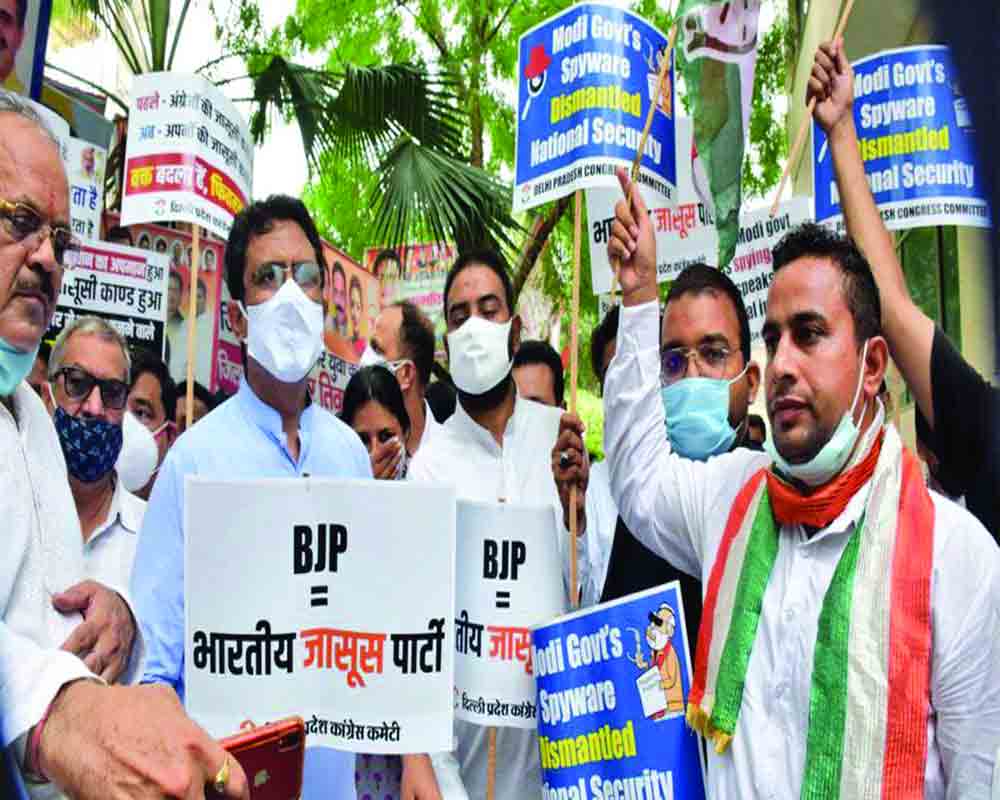 India is among the countries which bought and used the spyware programme, not against terrorists but against its own civil society

Pegasus, the mythical white-winged warhorse, has finally descended in India. Not now exactly, but a couple of years back, in fact well before the 2019 elections. Pegasus was the white horse on whose back the BJP ensured its historic comeback. Like the mythical Pegasus, it destroyed the Opposition and ensured a comfortable historic win for the warriors who owned it. In fact, they had bought it with the exchequer’s money!

For the uninitiated, Pegasus in our times is a spyware programme that can hack any phone and take covert control of the targeted device. Developed by the NSO Group of Israel, it can have covert access to its camera, microphone, contact list, stored data, and so on. It is available for any Government to tackle national security and terrorism. The manufactures claim that they do not sell software to individuals, businesses or organisations. They sell it only to the Governments so that it is not misused.

“Project Pegasus” is the hard work of French organisation Forbidden Stories and Amnesty international. They have investigated the sale, misuse and targets of Pegasus. They have fathomed the phone numbers of the people under Pegasus watch. They have shared their work with several media organisations. The Guardian, Washington Post, The Wire back home and many others are the collaborators in the project. What has emerged is nothing short of mayhem.

They have unearthed what many Governments across the world were up to, and how they were using it against people who the Government thought was a potential threat. India was one of those countries which bought and used it; not against terrorists but against its civil society. Politicians, journalists, lawyers, activists and even its own Ministers were the targets.

As unconfirmed reports suggest, it was used against the intern of the Chief Justice, election commissioner, Opposition leader and even the Government Ministers. They are no terrorists or threat to national security. The software that is in principle for combating terrorism and strengthening the internal security of the country was in fact strengthening the Government in power. It was helping it fix people who stand against it, and unleash a reign of terror in the name of fighting terrorism. As Home Minister Amit Shah rightly said people should understand the chronology. Indeed, they should and put things that happened in the last four-five years in perspective.

To connect the dots, let’s have a few names that appear in the long list of targets in India. A lot happened during and after the general elections in 2019. To begin with, the then Chief Election Commissioner Ashok Lavasa was a prominent player in the general election. He was on a panel hearing complaints against Prime Minister Narendra Modi for violating the code of conduct.

Lavasa dissented on a panel’s ruling on the complaints against Modi and Shah. His wife Novel Lavasa was served an income tax notice two months later. The intern, who had filed an affidavit against former Chief Justice of India Ranjan Gogoi for having made sexual advances, was also the Pegasus target. Her phone number, along with 10 other family members, was in the target list accessed by the Pegasus Project.

This was the time when many crucial and sensitive decisions were passed by Justice Gogoi, including Ram temple and Rafale. He gave a clean chit to the Modi Government in the Rafale deal. He passed the Ayodhya judgment just as it would please the Union Government. He also did not take a stand on the habeas corpus petition by Sitaram Yechuri to produce Mohammad Yousuf Tarigami. This was after an indefinite lockdown was imposed in Kashmir following the Modi Government’s decision to scrap Article 370. A Bench headed by Justice Gogoi did not bother to consider that the detentions were illegal. Pegasus also cut into the armour of Rahul Gandhi, the Opposition leader and the main challenger to Modi in 2019. Prashant Kishor, once a strategist for the BJP, was also among the targets.

Finally, poetic justice was done to IT Minister Ashwini Vaishnaw. He defended the Government in the House, saying such snooping was impossible. His phone itself was under surveillance! The software was used to spy on the accused in the Bhima Koregaon case, too. This was already hinted at by the western media that the Bhima Koregaon accused were being framed. Names of Hany Babu Musaliyarveettil Tharayil, his wife Jenny Rowena, Vernon Gonsalves, Anand Teltumbde, Sudha Bharadwaj, Gautam Navlakha, retired professor Shoma Sen and lawyer Arun Ferreira have been revealed by Project Pegasus. Among the accused was 84-year-old tribal rights activist Father Stan Swamy, who died on July 5 awaiting bail on medical grounds.

The Pegasus flies straight into the face of the Government, though it has denied any involvement in spying. If it was not involved, then it must prove so with a third-party investigation as demanded by Kapil Sibal. The onus is on the Government to prove that it is clean. It would not only restore people’s faith in democracy, it would also boost the country’s image which this Government claims to take so seriously.

(The writer is a columnist and documentary filmmaker. The views expressed are personal.)