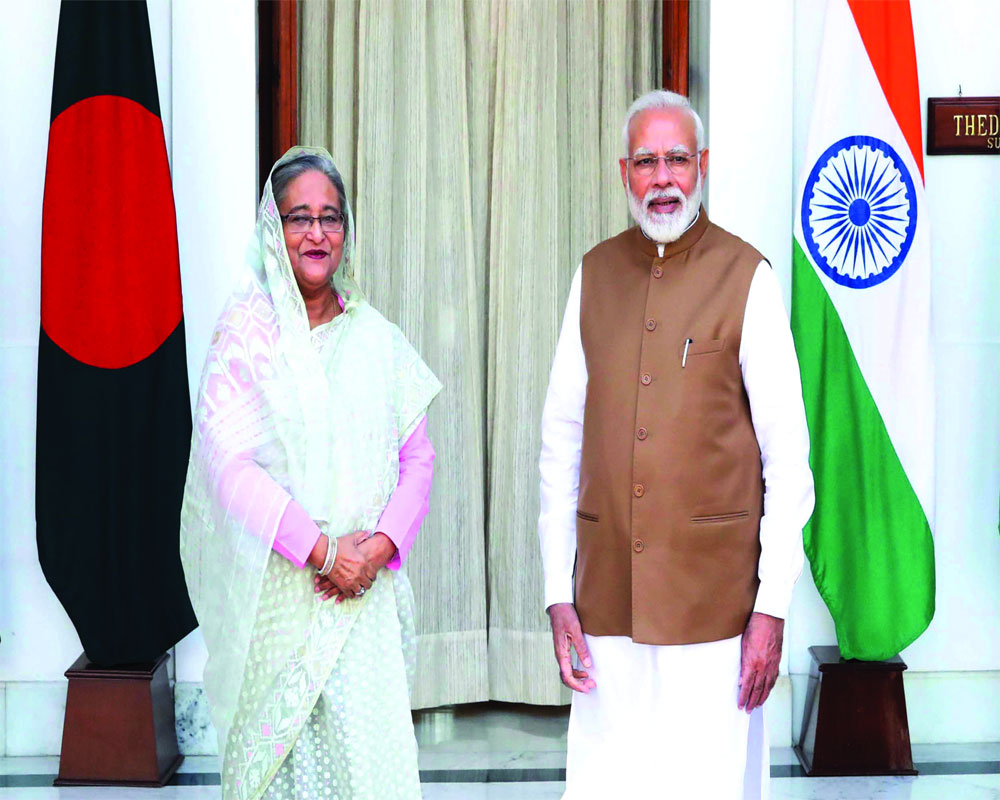 Indisputably, Bangladesh has turned out to be the sheet anchor of India’s “Neighbourhood First” policy, launchpad for “Act East” and Indo-Pacific strategy. Barring some issues over the CAA and NRC, both the countries enjoy most stable and trusted relations in South Asia. Prime Minister Sheikh Hasina has, in payback mode, delivered on security — counter-insurgency and counter-terrorism since 2009 — besides connectivity, trade and other bilateral issues. Insurgency in the North-East, down 80 per cent, is in its residual stage courtesy the cleansing of sanctuaries in Bangladesh. The land and maritime boundaries have been settled, including the enclaves. The only problem remaining is sharing the Teesta waters which might be settled with a BJP Government in West Bengal.

Prime Minister Narendra Modi is the chief guest in Dhaka on Friday for the historic triple commemoration: 50 years of the Liberation War of 1971, 50 years of India-Bangladesh bonding and the centenary of the founder of Bangladesh, Sheikh Mujibur Rehman. The joint Indo-Mukti Bahini victory in 14 days with the surrender of 90,000 POWs, including 195 Pakistani soldiers implicated in war crimes, is a rare politico-military feat. It was the first war India was prepared to fight with deft political and diplomatic manoeuvres. Strategic thinker and author Jaswant Singh would describe Bangladesh as geography’s revenge over history and lament that Pakistan’s military surrender in East Pakistan could not resolve the Kashmir dispute. Now Pakistan-Bangladesh relations are at their lowest following diplomatic excesses, including Islamabad’s spying and trial in Dhaka of the Jamaat-e-Islami members aligned with the Opposition Bangladesh Nationalist Party (BNP) who were not only involved in war crimes but also opposed to independence and secession from Pakistan. A gentle apology from Prime Minister Imran Khan any time now would make a grand gesture of reconciliation.

New Delhi and Dhaka have shown how neighbours can cohabit and thrive despite the ups and downs. The upward trajectory commenced with Sheikh Hasina’s return to power in 2009. The focus has been on connectivity in power grid, digital, road, railway, inland waterways and port facilities. The use of Chittagong Port, which Dhaka had earlier blocked, is now open connecting Agartala, 80 km away in Tripura, over the Maitri Setu bridge across Feni river making it the gateway to the North-East. A new railway service from Dhaka to New Jalpaiguri will augment the existing connectivity network. The aim is to restore and extend the pre-Partition rail-road-river systems.

Bangladesh’s economy is booming. The World Bank in its latest report has noted that environment-friendly projects will enhance GDP — in Bangladesh by 17 per cent and in India by eight per cent. Both the countries have defused friction points except the sharing of Teesta waters, vital for irrigation in north-east Bangladesh during the dry season. A Chinese-funded project is assisting in the management of Teesta. India and Bangladesh share waters of 54 rivers, operating under the Joint River Commission network. But it is the people-to-people connect that is at the heart of bilateral relations. Sheikh Hasina calls India a “true friend”. More than 1.6 million visas are issued to Bangladeshis annually, the highest to any country. Both the countries have evolved effective “differences-resolving” mechanism by high-level visits and conversations. The CAA and NRC are prickly issues that were smoothened out. The Rohingya issue has become complex after the junta’s coup. India has donated two million doses of COVID-19 vaccine in addition to five million doses to be supplied commercially.

Commemoration of the Liberation War annually in New Delhi, Dhaka and Kolkata has been institutionalised. As an Indian soldier who helped the Mukti Jodhas in their Liberation War, I was a privileged invitee to Dhaka to celebrate freedom and recall the march to victory with Bangladeshi colleagues, which is a bonding in blood.

The father of Bangladesh, Sheikh Mujibur Rehman, celebrates his centenary as Banga Bandhu with Modi and Hasina jointly inaugurating the Mujib-Bapu digital exhibition and Mujib being conferred the Gandhi award. President Mohamad Abdul Hameed will release the Sheikh’s memoirs to relive his political struggle cut short by his assassination in 1975 which led to an era of military rule. It was in this period that the seeds of anti-Indianism were sown. As late as in 2013-14, on a visit to Dhaka, I discovered that the Bangladesh Army was treating India as Red Land and China the high benefactor.

In his book, Zulfi Bhutto of Pakistan, Stanley Wolpert says: “If only Bhutto had abided by election results, there would have been no Bangladesh and any reason for India to intervene. India and the Federal Republic of Germany facilitated the return of 195 PoWs charged with war crimes by persuading Mujib to be lenient. In 1973, German Chancellor Willy Brandt, through protracted negotiations with emissaries of Zulfiqar Bhutto and Mujibur Rahman, succeeded in convincing Mujib that he should forego the trials. Sheikh Mujib displayed extraordinary courage and wisdom towards reconciliation with Pakistan. But that, alas, was shortlived.”