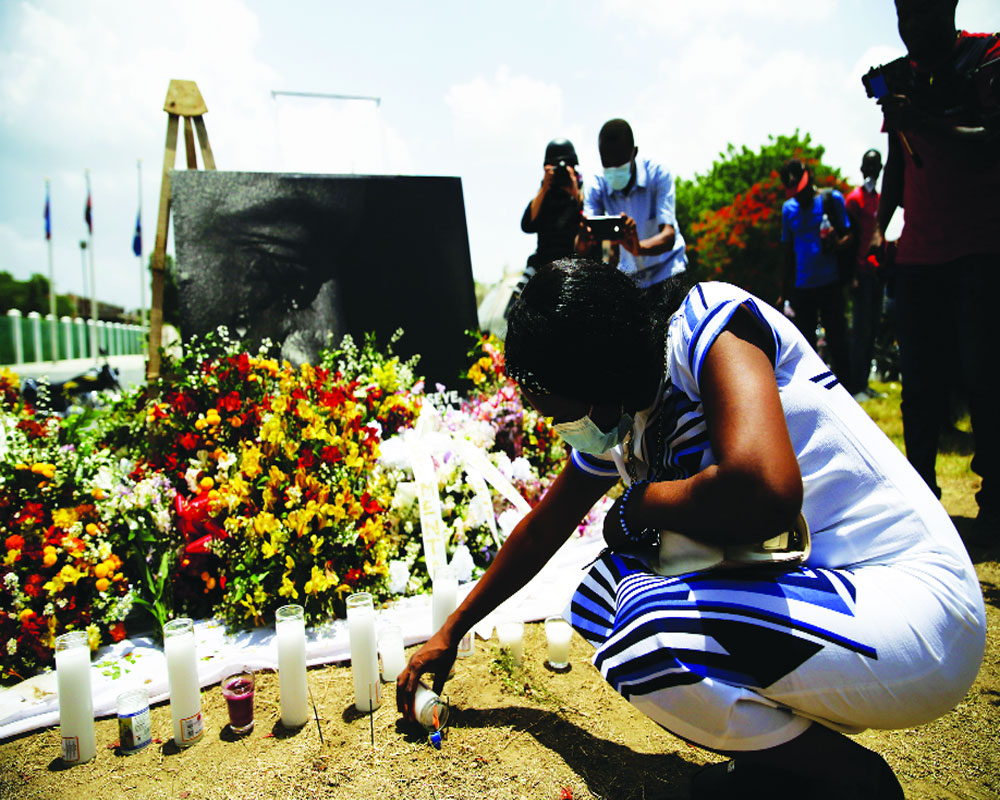 During the Moise rule, two major scandals rocked the presidency of the slain leader. One is regarding his presidential terms and the other is the multi-billion-dollar corruption scandal called ‘Petrocaribe Scandal’. Haitians’ demand for economic justice and fair governance has not been heeded for decades. To instil public trust in the future Government, it is required that elections are held in a transparent manner, possibly under the supervision of international observers

Haiti, a former French colony in the Caribbean Islands, is in grave crisis that ensued in the assassination of its President Jovenel Moise at his residence on July 7. In the melee, his wife and the first lady, Martine Moise, sustained severe injuries. The unidentified gunmen are suspected to be foreigners as they spoke English and Spanish, while the official languages of Haiti are Creole and French.

Some media reports say the attackers pretended to be part of a US drug enforcement operation to access entry into the presidential palace. But no official details have been made available on this.

For now, a nationwide state of emergency has been declared by interim Prime Minister Claude Joseph primarily to prevent large public gatherings across the country. It seems the succession to the presidency is murky and armed forces are likely to play a decisive role in bringing back political stability in this tiny Central American nation.

The election of a new President for a new five-year term shall be held at least 45 and no more than 90 days after the vacancy occurs. The acting President in no case can be a candidate in the next presidential election. But unfortunately, the Supreme Court President died of Covid-19 recently. For the acting PM to take over, he has to be formally approved by Parliament. But the problem is that since elections have not been held for Parliament, it is almost defunct. Therefore, the Republic of Haiti seems to have plunged into a fierce political battle for the top political office.

In fact, the genesis of the crisis lies in the controversial presidency of Moise. The discontent among the masses has been fuelled by the Opposition. For past one year, large-scale protests and violence have been rocking the streets of the country. Till Moise was alive, people strongly believed he was no more working for the ordinary people. The protesters branded him as one who was aligned with the bourgeois, the businesses and the crooks.

The spread of Covid-19 pandemic aggravated the life of the masses that have been bearing the brunt of economic injustice and corruption. Many youngsters dropped out of schools and colleges. And many of them joined the street gangs either to protest against the Government or to earn their livelihood.

The allegations have been substantiated by the history of Moise’s rise to power. Following his university education, Moise started his first business venture in Port-de-Paix, known as JOMAR Auto Parts. Simultaneously, he began another business, the production plant for organic banana extending over 10 acres of land, which earned him the popular name of “Neg Bannann” (Banana Man) of Haiti. Finally, he got into the business of water plants and had the record of creating the first free trade agricultural zone of Haiti, covering around 2,500 acres.

During the Moise rule, two major scandals rocked the presidency of the slain leader. One is regarding his presidential terms and the other is the multi-billion-dollar corruption scandal called “Petrocaribe Scandal”. He contested presidential election in 2015, but he had to re-run again in 2016 for which the results came only in 2017. Thus, his term could have come to an end only in 2022.

However, the Opposition says he had been illegally occupying the office as his term started in 2015. The opponents also used to accuse him of fuelling political violence by strengthening gangs with money, muscle power and weapons so as to intimidate his adversaries. However, the centrality of the entire protests so far was remained with the petro scandal. It actually came from a scheme to buy discounted oil from Venezuela on cheap credit. The principal aim of the scheme was to set aside funds for social welfare schemes. But the money was finally pocketed by politicians with the full knowledge of the Moise establishment.

Therefore, the misappropriation took the centre stage of protests against the Moise Government. And across Haiti, “Kot kob Petrokaribe” (Where is the Petrocaribe money?) became the symbolic slogan of the protesters.

Located in the Caribbean, Haiti occupies the western third of the Island of Hispaniola. When Columbus landed in Hispaniola on December 6, 1492, he discovered a kingdom ruled by a cacique or Taino Indian Chief. After the French arrived here in the 17th century, most of the indigenous people were exterminated in the Western Hemisphere. This forced them to hire slave labourers from West Africa to work in plantation fields. It was once known as the “Pearl of the Antilles”, the richest colony of the French in the 18th century. But then in 1804, the French had to leave, and the Haitians claimed their independence. Thus, it became the first black African Republic. And the proud Haitians changed the French name of the country i.e. Saint Domingue to their own Taino name of Haiti or Ayiti in Creol language. But its subsequent history has been marked by poverty, authoritarianism, external interference and political instability after its independence from the French.

Two years back, intermittent demonstrations had seen roads blocked. Mobs attacked offices and institutions associated with the Government and its allied agencies. What makes worse the situation is the emergence of a more covert strand of violence that may push the Haitian civil society further into a catastrophe. Experts observing Central America say that there has been a massive supply of arms and cash to gangs that could finally make Haiti a boiling point of the region. These are ugly symptoms.

Leaders across the world have poured in strong messages on the ghastly killing of Moise. Condemning the assassination of the Haitian President, the United Nations Security Council (UNSC) has called on all parties to “remain calm, exercise restraint and avoid any act that could contribute to further instability”.

World leaders have condemned the assassination but none of them are willing to be involved in the crisis. US President Joe Biden offered condolences to the people of Haiti for the “horrific assassination” but he has not acceded to the request of sending American troops to stabilise the country, saying it is “not on the agenda.” However, the US will bolster security at its embassy in Haiti.

Boris Johnson, the UK Prime Minister, called the assassination “an abhorrent act” and called for calm. Colombian President Ivan Duque called on the Organization of American States to send an urgent mission to protect the democratic order in Haiti.

Now the “Banana Man” is gone. His tragic death has brought a cloud of uncertainty to the poverty-stricken nation. The Opposition, which has been impatient to grab power by demanding “early” elections, is confused in the aftermath of the assassination.

Even if the elections are held at short notice, the moot point remains whether the new administration will brighten the fate of the common Haitians. There is no silver bullet to address the growing discontent among the masses. Haitians’ democratic rights and freedoms have been stolen by the power mongers for decades.

Their demand for economic justice and fair governance has not been heeded. To instil public trust in the future Government, it is required that elections are held in a transparent manner, possibly under the supervision of international observers. Otherwise, Moise’s assassination will plunge the impoverished nation into further turmoil.