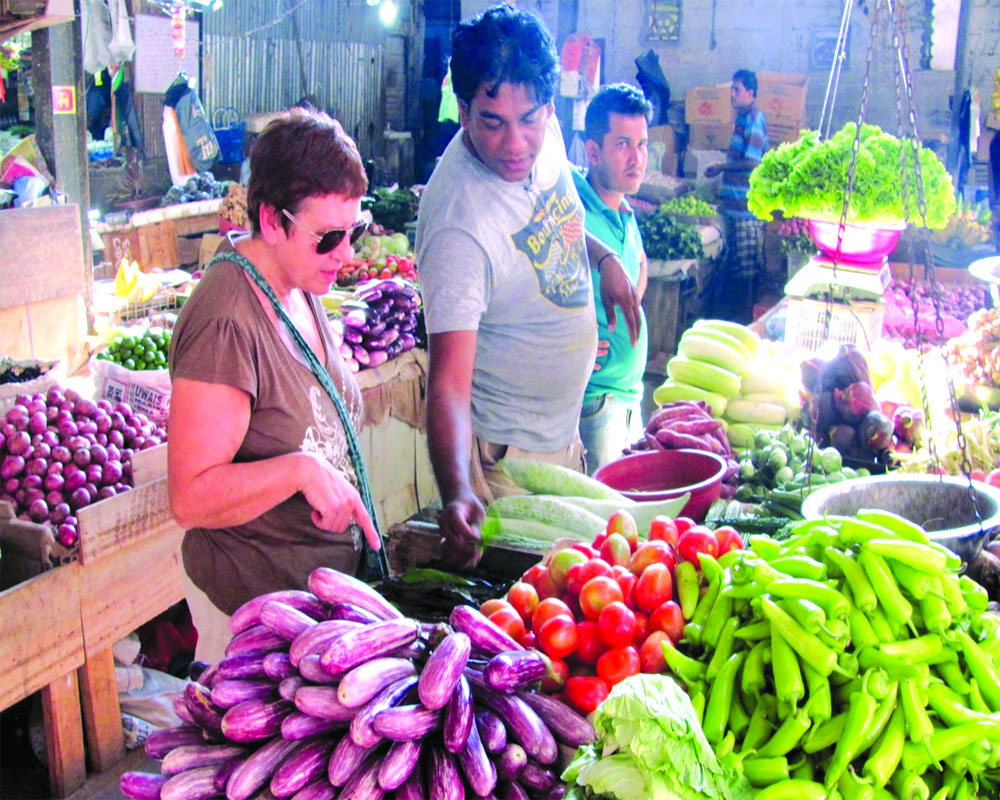 From a carefree, merry-making and well-fed nation, our neighbour has run out of foreign exchange, having overborrowed from China

Since 1964, I have been in touch with Sri Lanka intermittently. At the time, I was told that the butter and ice-cream they ate came from New Zealand. Many vegetables were also imported, including from India. A few days ago, I read that Colombo has declared a national “food emergency”. What their people eat as a habitual diet will now be from ship to mouth. The country has run out of foreign exchange; its Government overspent on development by borrowing from China, a greedy lender. The takeover of Hambantota port by the lender was a signal that what Sri Lanka could not pay back China in cash, it is having to fork out in kind, namely real estate at the cost of its sovereignty.

Two characteristics of the Singhala people I have noted are (One) they love life and enjoy themselves when the going is good. Two, they are a little suspicious of Indians, because of the Tamils. They fear that someday a situation may arise whereby India may take over Sri Lanka. Given identical lending terms by India and China, they would prefer the latter. The presumption is that the yellow giant is far away whereas India is next door along with its Tamils. The food emergency is the result of the focus on “today, tomorrow and the day after will take care of themselves”.

Truly, Sri Lanka has good guns but no bread. Right after its independence, Sri Lanka (then Ceylon) has not insisted on growing its staple food on a sufficient scale. In the early days and for years, the country concentrated on tending its tea gardens, rubber and copra trees. The foreign exchange earnings were so plentiful that there used to be a picnic of imported goods. The first painful pinch was felt in 1964 when NM Pereira was the Finance Minister and he went to Parliament to pass very stringent laws. After working a whole career, on retirement, foreigners were henceforth allowed to remit only Rs 75,000 for Indians and Rs 2,50,000 for others. The discrimination was severe. Had the Indian High Commissioner not been very helpful, my father-in-law could not get permission to remit a total of Rs 1,50,000 after working in a British Company for 32 years, all in Sri Lanka. Such was the foreign exchange famine suddenly discovered.

Although I must confess, the management at New Delhi was no better. In 1990, the Indian treasury had run out of foreign exchange. In order not to fail commitments overseas, the Government sent many crates of gold to banks in London. Fortunately, in 1991, India was gifted with a decisive Prime Minister PV Narasimha Rao who liberalised and globalised Indian economy. He thus brought about an economic revolution.

A small country is vulnerable both economically as well as politically. Its Government must play very cautiously. Sri Lanka liberalised before India and recovered from the cave-in of 1964 that is described above. But any significant decline in foreign exchange earnings should be taken seriously. Otherwise, trouble can surround the economy before giving the Government a chance to draw in the reins. The picture of tea industry has been rather sad everywhere, be it Sri Lanka or South India. But to Sri Lanka, it makes a big difference. The price of a plain to medium tea was Rs 2/kg (though earlier the weight was in pounds) in 1939. By now it should have been in step with the inflation, Rs 600 to 800. But it is only the equivalent of Rs 200 (Indian).

Garments are another Sri Lankan activity. When there is prosperity, it can earn good foreign exchange. On the other hand, when there is a crisis like the current one caused by COVID, there can be a slump in demand. People, short of money, can do without buying clothes for, say, a year or more. These are the kind of things that look like having brought trouble for Sri Lanka. More so, because the country has borrowings to return. Tourism is another cause of the crisis. It was the largest single foreign exchange earner for Sri Lanka. Due to COVID, it is substantially down.

In the interim, Sri Lanka virtually ignored India, probably embarrassed by its passionate affair with China. After the yellow giant claimed Hambantota, perhaps things changed somewhat. The current Indo-Sri Lanka ties have improved. India may offer food grains, wheat, rice and all else available. And India may consider swap loans whose return would be in Sri Lanka rupees. India can buy only Sri Lanka goods with the returned money against the swap loan. Sri Lanka has described traditionally as the Emerald Isle. It is indeed a beautiful country with sea on its periphery.

People, especially from the Western world, find it irresistibly attractive. The beaches are out of this world and monuments of Buddhism are also engaging, whether Anirudh-apuram, Pollanaruha or Sigiria. The Emerald Isle also has a charisma which few other equally beautiful places have. Its infrastructure for the keen tourists is praiseworthy with its many five-star hotels, its transportation et al.

(This is the first part of a series on India making multi-dimensional advancement across nations and spheres).