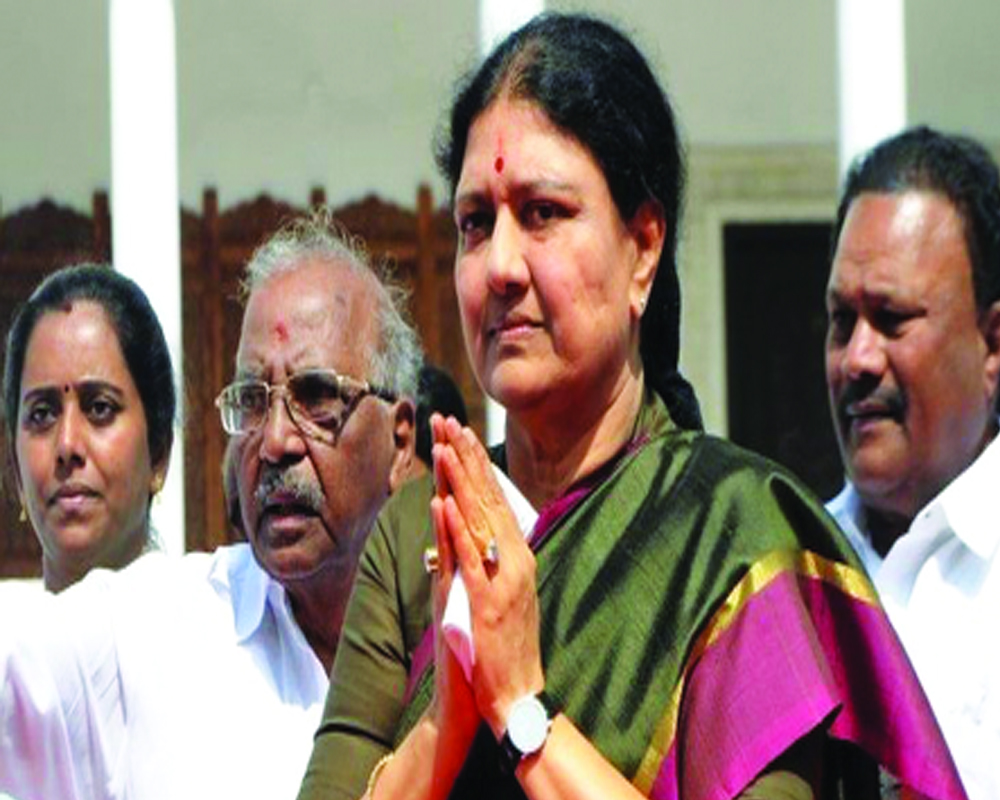 Will V.K.Sasikala, a one-time close confidante of late Tamil Nadu chief minister J. Jayalalithaa, make a comeback?  It is a question mark as politics is changing fast in the state.  'Chinnamma', as she was known, has had her ups and downs in the past four decades. She enjoyed power as Jayalalithaa's shadow but she never did understand that she was only the shadow, not Jayalalithaa.  She took over the party and nearly became Jaya's successor in 2017 but the BJP spoiled her plans and she instead went to Parappana Agrahara jail in Karnataka for four years.

In 2017, on a sunny February morning, Sasikala stopped at Jayalalithaa's grave before going to the Bengaluru jail and thumped the memorial platform thrice with her palm vowing to avenge her enemies. Now, after her release and a month after the AIADMK lost power in the Tamil Nadu polls, she is all set to return to active politics. In a recent alleged, phone conversation with one of the party cadres, Sasikala confirms her plans to take the political plunge.

She has been sending confusing signals about her future. Significantly, 2021 is not 2017.  Much has changed in the past four years. Her two handpicked leaders -former chief ministers O.Panneerselvam (OPS) and E.Palaniswamy (EPS)—have captured the party and they do not want her to return.  Sasikala had been involved in separate power tussles with both leaders earlier.

The intensifying feud between EPS and OPS even after the electoral defeat and Sasikala's come-back plans are threatening to break the party again. EPS pipped OPS to the post of the leader of opposition after a literal show of strength: the former had more legislators backing him. Sasikala, on the other hand, sees an opportunity in the two leaders' tussle to avenge her setbacks.

Though she cannot contest until 2027, there is no legal ban to head a party. It is a mystery why Sasikala announced her retirement from politics in March and why she wants to come back now. The timing she has chosen is also significant because the AIADMK is still struggling to come to terms with the loss of power. The cadres, especially EPS backers, are opposed to her emerging as a power centreonce again.  EPS is one of the big hurdles for her return to the AIADMK because he senses a threat to his position in the party.

The 'leaked' audio clip of an alleged conversation between Sasikala and one of her supporters has gone viral, creating a flutter about her imminent return. In the clip she is heard saying, "we will for sure streamline the party…certainly, I will come". And this as well: "You don't worry at all. Sure. We will resolve all the problems in the party. I will come. I will definitely come. You take care and be safe." For now, she has sent enough signals to her supporters that she is ready and waiting.  Will Sasikala achieve her ambition? Though age is against her, those who know her believe she will not throw in the towel easily and will weigh her options to see how she can stage a comeback.

The second hurdle is her own corrupt image. Her first effort to float an outfit AMMK through her nephew, TTV Dhinakaran, flopped in the recent assembly polls even though he initially won the R.K.Nagarassembly by-poll in 2017. Now she wants to find a place for herself in politics.

Thirdly, there still are other cases against her pending in the courts. She is particularly troubled by a case involving the purchase of properties with demonetized currency. With a UnionGovernment and the State Government hostile to her she is skating on thin ice.

Fourthly, according to insiders, Sasikala is in no hurry as her target is the 2024 Lok Sabha polls. She wants to get back into the BJP's good books by that time and establish herself and her nephew as players by using her money power. She wants to do this either by dividing the AIADMK or expanding her nephew's AMMK. Being the backroom player and Jayalalithaa's shadow in Tamil Nadu politics since the 1980s, Sasikala knows the ins and outs of Dravidian politics. She and her family were called the "Mannargudi mafia" in Jaya's time.

Chinnamma's future hangs in balance for now. It depends on many factors. Where one week is long in politics, another three years is too long.