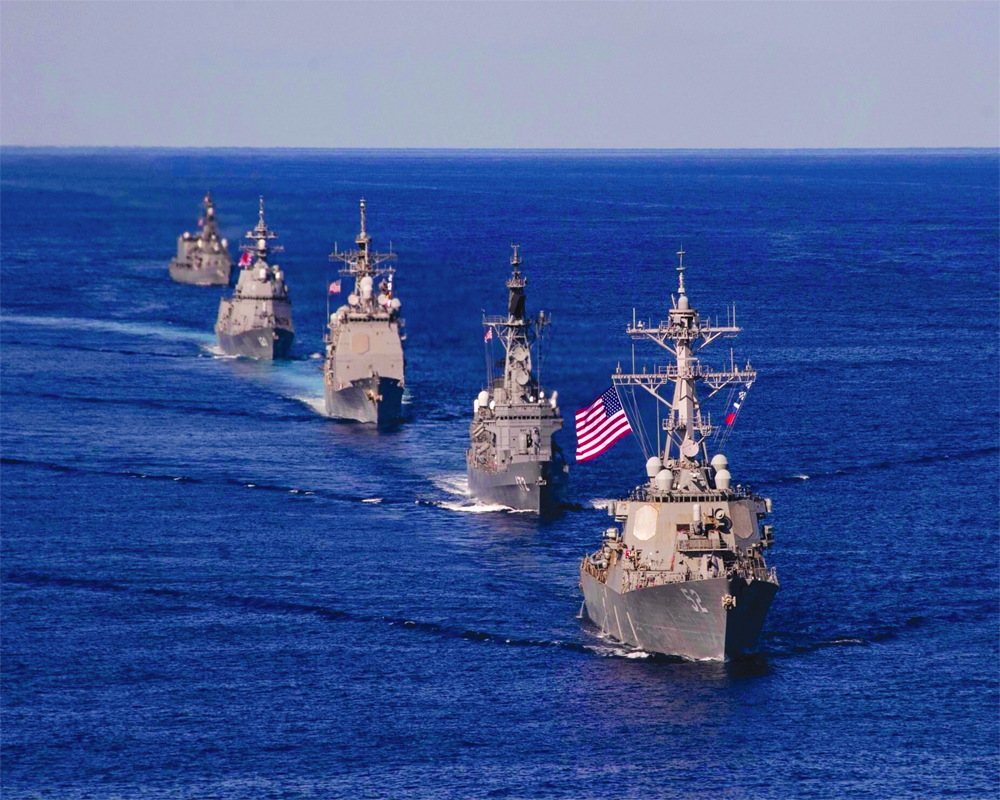 The current crisis over the Senkaku Islands in the East China Sea is just the tip of the iceberg. Xi’s massive expansion plan in the form of BRI or CPEC threatens peace and tranquillity in and around the region. Further, long suppression of democratic rights in Hong Kong, Taiwan’s continued claim for sovereignty, Tibetan’s long drawn war for the recognition of their uniqueness, the torture on the Uighur Muslim minorities and other ethnic groups in Xinjiang, and finally, a contested claim of many neighbours over the South China Sea are the permanent sore points for Beijing

The Senkaku Islands have emerged as the new flashpoint between Japan and China in the East China Sea (ECS). While China has intensified its campaign to assert its claim over the territories they call the Diaoyu Islands, Japan has tried to make the US back its sovereign rights over the area.

Both the nations are gearing up to enhance their military preparedness, particularly the radar and missile systems around the region. The total area of disputed islands is around 81,000 square miles and the number of islands is eight. As per the record of the US Energy Information Administration, the ECS has an estimated 200 million barrels of oil.

Historical records say that Japan formally claimed the Senkaku Islands in the year 1895. And some of the Japanese individuals have been occupying these islands for the last 120 years. However, only during the Second World War, America occupied these territories from Japan. But afterwards, Japan brought them back under its control. Until 1960s, China hardly paid any attention to Senkaku, as per archival records. However, the year 1969 turned out to be a decisive moment for China in the recent history of Senkaku. The offshore oil development potential attracted China’s attention towards the Island chain. China had in 1979 discovered that there was huge field of hydrocarbon in the area, experts claim.

In January, China passed its Coast Guard Law to increase its presence in and around the Senkaku Islands. This set off the Yoshihide Suga Government to revise the Japanese Coast Guard Law so as to shoot any intruder that tries to land in these islands. What has changed the status quo in favour of Japan was the buying of three islands of the Senkaku group by the Government from a private citizen who owned them in 2012. Since then the presence of Chinese Coast Guards around the islands has increased. Precisely, the routine confrontation between the two nations over the islands has reached flashpoint.

China’s territorial claims over the ECS is unsubstantiated. But China points to historical documents to buttress its claim over these islands. Way back in 2013, as per media reports, Chinese Foreign Ministry claimed: “The Diaoyu Islands are about sovereignty and territorial integrity. Of course, it is China’s core interest.”

This kind of statement is rare from the Chinese Government, and when they are released, they really indicate something serious. In Chinese political lexicon, “core interest” is meant to be a zone of vital importance for the country’s territory and sovereign identity. The terms “core interests” are specifically reserved for top security-related and troubling areas such as Xinjiang Uighur Autonomous Region, Tibet and Taiwan. Therefore, it is strictly maintained that on such areas there is no room for any manoeuvrability. It brings home the message that Beijing treats the dispute over Senkaku Islands as a major concern in bilateral relations with Tokyo.

The American position on the Senkaku Islands is noteworthy. Since the coming of Richard Nixon to power in 1969 as the 37th President, the US has been maintaining that the territorial sovereignty over the Senkaku Islands must be settled by the three conflicting parties involved i.e. Japan, Taiwan and China. This stance continued till 1995. But 1996 onwards, during the reign of President Bill Clinton, the US policy makers came up with a new perspective on the disputed island. The American diplomats aired the view that the Senkaku Islands are covered under Article 5 of the US-Japan Security Treaty as Japanese administered territory. From this position, Washington took a pro-active step in 2014 under Barack Obama Presidentship. He became the first sitting American President to declare that the US will defend the “Japanese islands” if attacked. This made the country’s position completely clear on these disputed islands. Further, President Donald Trump in February 2017 took one more step to affirm America’s commitment towards the security of the Senkaku Islands. In a formal joint declaration released with then Japanese Prime Minister Shinzo Abe, Trump expressly highlighted that the US-Japan Security Treaty is applied to the Senkaku Islands. And also, the declaration made it public that the US opposes any unilateral action aimed at contesting Japan’s administration over Senkaku Islands.

In fact, the Trump-era China policy was nothing less than a great war of sort against Beijing’s sustained aggressive attitude both towards its neighbours and to the major powers of the world, particularly the US. His policies towards China symbolised two featured separate tracks: one, policies Trump personally pursued, and two, the policies spearheaded by China experts serving in his administration. It was a like virtual war against the regime of Xi Jinping. Therefore, when then US Secretary of State Mike Pompeo visited Japan in October 2017, he had issued a public call to counter China by forming an “alliance of democracies”.

Again, US-Japan joint military exercises around the Senkaku Islands under Trump strengthened preparedness for any armed intervention from China. In fact, Lieutenant General Kevin Schneider, the commander of the joint military exercise in October 2017 made the real intentions behind the drill clear, when he said: “The United States is 100 per cent absolutely steadfast in its commitment to help the Government of Japan with the situation of defending the Senkaku Islands. That is 365 days a year, 24 hours a day, seven days a week.”  Thus Tokyo has all ensured the support of Washington for its continued control and safeguard of these mineral rich islands in the East China Sea.

The overwhelming US support to Japan over the islands was more than sufficient for China to understand what actions will follow in case Beijing tries to force its rule over Senkaku.

However, the so-called normalisation of Sino-Japanese relations is a misnomer. In 2018, China and Japan celebrated the 40th anniversary of the signing of the China-Japan Treaty of Peace and Friendship, but then global situation soon deteriorated as the Covid-19 came with a barrage of charges against China for spreading the pandemic. In the same year, Chinese Premier Li Keqiang paid a maiden visit of Japan in May, and in October then Prime Minister Abe visited China.

On the ECS, China and Japan agreed to strengthen maritime crisis management, establish a diplomatic consultation mechanism and sign a maritime rescue agreement. However, Sino-Japan relations will always be troublesome as there are several potential face-off points. The problems in the South China Sea and in the East China Sea, the traditional rivalry between the two Asian giants, an increasing and sustained presence of US military support behind Japan, and a new alliance called QUAD --- a grouping of the US, Australia, India and Japan to prevent grand Chinese expansion in the region --- have certainly strained Sino-Japan bilateral relationship.

Therefore, the current crisis in the ECS is just the tip of the iceberg. China’s claim over the Senkaku Islands will only deteriorate the bilateral relations with Japan. Xi’s massive expansion plans, whether in the form of Belt and Road Initiative or China-Pakistan Economic Corridor, all threaten peace and tranquillity in and around the region. Further, long suppression of democratic rights in Hong Kong, Taiwan’s continued claim for sovereignty, Tibetan’s long drawn war for the recognition of their uniqueness, the torture on the Uighur Muslim minorities and other ethnic groups in Xinjiang, and finally, a contested claim of many neighbours over the South China Sea are the permanent troubled issues for Beijing.

Xi’s muscle power and economic debt trap in the name of aid have not yielded the desired results for China to claim a global leadership role. Forget about the world, in Asia itself, few nations are ready to accept the hegemony of Beijing.