Should the global debt pandemic worry us?

Should the global debt pandemic worry us? 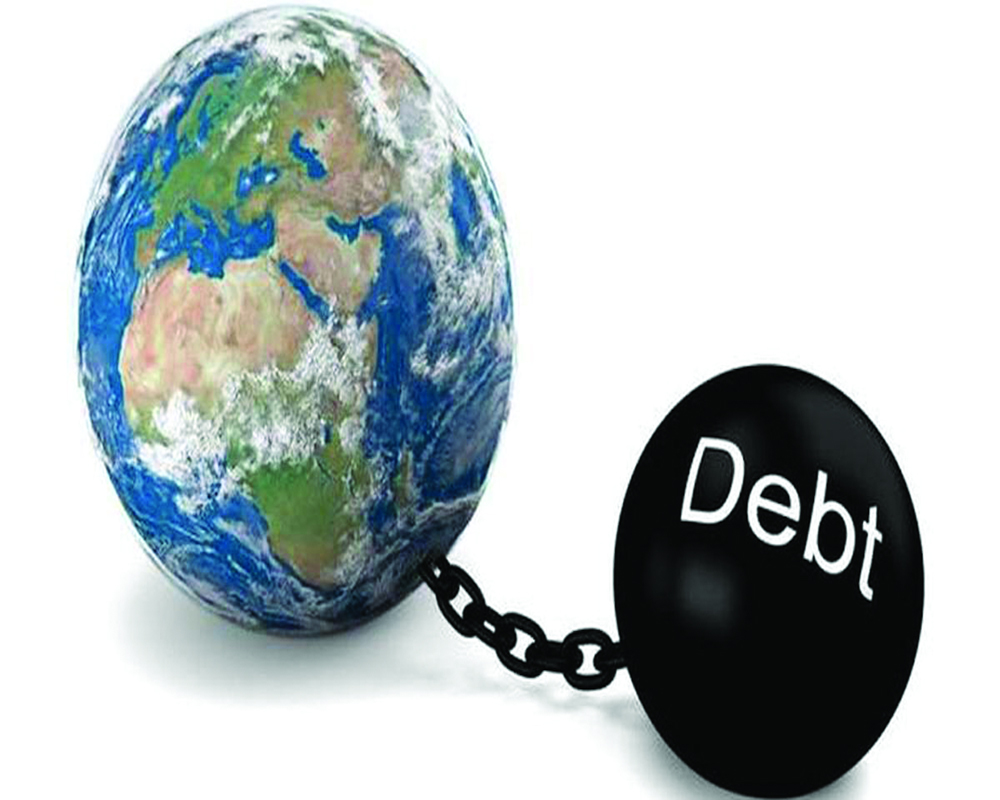 As long as primary Budget deficits are not too large, the main problem is to stabilise public debt, independent of the size of the economy so that it may not go beyond control

The previous decade saw the fastest increase in debt in emerging economies in the last 50 years. The IMF estimated that global public debt at the end of 2020 would touch 98 per cent of the GDP, and India’s gross Government debt would be at 90 per cent of the GDP. According to the IMF’s Fiscal Monitor, the debt-to-GDP ratio exceeds 100 per cent in most OECD countries and close to 100 per cent in emerging ones. Among the major economies, only China (66.5 per cent), Australia (70 per cent) and Germany (72 per cent) have fared better. The problem economies of Italy and Greece have seen debt levels rising to 158 per cent and 200 per cent of the GDP, respectively, while Japan’s debt is 264 per cent. From 2021 onwards, global debt will rise higher than in the pre-Covid times. A credible medium-term fiscal framework is essential to combat rising debt, but with the pandemic still out of control, additional revenue mobilisation necessary for public spending on health and infrastructure is now more difficult than ever before in most developing countries. The saving grace is that borrowing is now cheap, thanks to the interest rates falling to exceptionally low levels and is expected to remain lower than the growth rates in most countries. According to S&P Global, in 2023, growth will outpace interest rates not only in all rich countries, but also in 53 out of 60 emerging economies. The “growth-corrected interest rate”, the differential between interest and nominal growth rates, will be -3.6 per cent in India, -6.5 per cent in China and -33.8 per cent in Argentina.

This legitimately raises the question, should emerging economies also rethink their fiscal limits? The Economist quoted India’s budgeted fiscal deficit of 9.5 per cent of the GDP this fiscal year with no  road map to bring it below the three per cent limit prescribed by the Fiscal Responsibility and Budget Management Act, while it noted that the latest Economic Survey had also highlighted that India’s interest rate has been below its growth rate “by norm, not by exception”, and its assertion that higher debt and fiscal spending during an economic crisis should not cause unnecessary worries. But Fitch Ratings, noted that in the last decade, the average interest rate had fallen from four per cent to two per cent in developed economies, while across emerging markets, it had increased from 4.3-5.1 per cent. Thus the benefits of lower rates are mostly available to rich nations.

The classical Domar Model lays down two conditions for sustainability of Government debt: First, the nominal growth rate should exceed the interest rate on public debt and, second, the primary account of the Government, which means taking out the interest payment, should not have any deficit. If both conditions are satisfied, the debt stock in GDP will decrease fast, and even if the primary account has a deficit, it will ultimately converge to a sustainable level. But if the growth rate lags behind the interest rate, then public debt will increase indefinitely to be unsustainable. Thus public debt can stabilise at a higher level but this would render a country vulnerable to economic shocks. However, since this model does  not  consider  the  interdependencies  existing between the interest rate, the structure of public  spending,  the  degree  of  public  indebtedness  and  the  growth  rate which influence each other, economists Hamilton and Flavin suggested another model. According to it, the inter-temporal Budget constraint must be satisfied to make the debt stock sustainable, which requires the present value of future primary surpluses to cover the size of the current public debt. The uncertainty of future values of projections, interest rates and inflation remains the weakness of this model, but whatever model is used, increasing public debt does not necessarily imply its unsustainability, especially when a country needs additional finance to carry out structural forms or for making capital investments on infrastructure.

As long as primary Budget deficits are not too large, the main problem is to stabilise public debt, independent of the size of the economy so that it may not go beyond control. This is simple budgetary arithmetic: If the debt was stable at 60 per cent of the GDP with a primary deficit of three per cent, to stabilise it at 80 per cent would require the primary deficit to be limited to four per cent. The Economic Survey points out that GDP growth in India has always exceeded interest rates in the last 25 years, though the primary account has often been in deficit, but less than the maximum limit defined by the debt sustainability equations. The survey concludes that even in the worst case scenario, with real growth being only four per cent for the next 10 years and high primary deficits 6.8 per cent of the GDP (Centre plus States), five per cent inflation and a nominal interest rate of six per cent, public debt will still be sustainable. This scenario is not peculiar to India. The IMF says that emerging economies have experienced growth rates exceeding interest rates 75 per cent of the time. Of course, there is an element of risk in case of high prevalence of external debt in the overall debt portfolio because if the exchange rate weakens, the debt-to-GDP ratio will rise sharply even if the interest rate remains modest. But for India, this risk is minimal as external debt constitutes only about six per cent of our total liabilities (Rs 5.85 lakh crore in 2019-20).

Government debt amounted to 73.8 per cent of the GDP in 2019-20, before the pandemic pushed it much higher. As per the road map prescribed by the 15th Finance Commission, India’s debt should decline marginally from 89.8 per cent to 85.7 per cent of the GDP over 2020-26, but the decline will practically take place in the last three years. Thus we need to stabilise our debt around that level provided these projections hold. This may not be the case as additional spending will be required on health and infrastructure.

But the moot question is whether the high debt level is desirable even if it is sustainable, as public borrowing generally crowds out private investment and hurts the economy. Perhaps the answer lies in how the borrowed funds are used. If the Government spends on investment, like the 26 per cent increase in capital spending budgeted for the next fiscal, this risk would be less, especially when the economy is operating below capacity as is the case now; public spending can then bring in additional private investment by improving incomes and profitability.

However, this is not the first time a debt pandemic has hit the world and there were three earlier waves of debt accumulation during 1970-89, 1990-2001 and 2002-09, all of which began during periods of low real interest rates and easy access to borrowing from the financial markets. Each caused global recessions in 1982, 1991 and 2009 and economic downturns in 1998 and 2001, and were followed by structural reforms designed to lower vulnerabilities, with greater reserve accumulation and strengthening of policy frameworks. Controls like inflation targeting, fiscal rules and more robust financial sector supervision became the norm.

We are now riding the crest of the fourth wave that began in 2010 but peaked during the pandemic with the slowing of economic growth in most countries. The conditions were remarkably similar to those after the 2008 meltdown, when interest rates were low and access to financial markets for capital was easy due to the banks having extended their outreach remarkably. As the pandemic now tests the resilience of economies, a global recession which was already raging, is now pushing the world into a deep debt crisis, which marked the end of each previous wave. Like in the case of previous waves, now also deeper structural reforms are called for. In the Indian context, this will mean many more reforms of the factor markets, along with reform of agriculture and financial sectors while strengthening the overall regulatory mechanisms. Appropriate policy choices are crucial because once recovery gets underway, only reforms and the accompanying institutional mechanisms can help restore our fiscal and debt sustainability.

(The writer is a former Director-General of the Office of the Comptroller and Auditor-General of India and an academic. The views expressed are personal.)