South Sudan — A decade of Independence

South Sudan — A decade of Independence 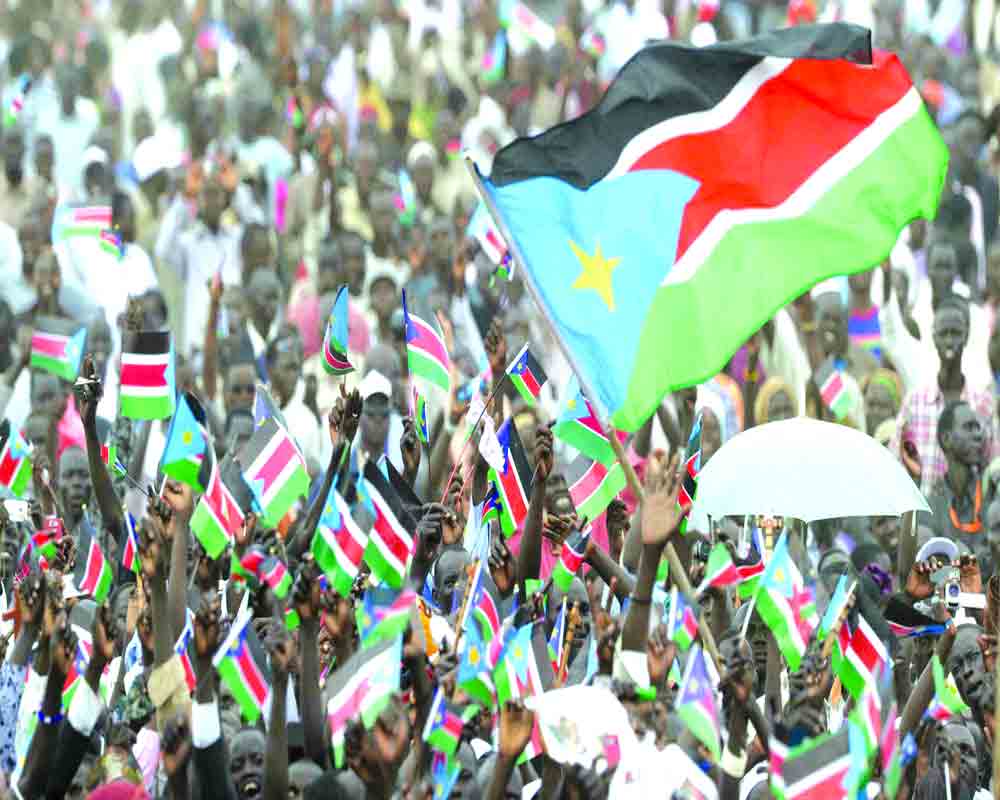 This month South Sudan is celebrating its first decade of Independence, but there is not much to rejoice. Since its separation from mainland Sudan, it has been experiencing continued violence, endemic corruption, poverty and underdevelopment. However, the 10th anniversary of country’s historic achievement of Independence provides an opportunity to inject fresh initiatives to the ongoing peace process

South Sudan became the world’s youngest nation on July 9, 2011. The birth of the Republic of South Sudan was the culmination of six years of peace process that began with the signing of the Comprehensive Peace Agreement (CPA) in 2005. With the signing of the CPA, the war between the South and the North Sudan came to an end and the peace deal, known as the Naivasha Agreement between Khartoum Central Government and the Sudan People’s Liberation Army/Movement (SPLA/M), led to a historic referendum which took place in Southern Sudan between January 9 and 15 in 2011.

The main purpose of the referendum was to decide whether the region should continue to remain a part of Sudan or become independent. However, a simultaneous referendum that was supposed to be held in the Abyei region on whether to join South Sudan could not take place due to massive violence. The Referendum Commission published the results of the referendum on February 7, 2011, which showed more than 98.83 per cent people voted in favour of separation from the mainland Sudan.

South Sudan’s partition from Sudan was predicted long ago. Interestingly, this part of Sudan was experiencing unrest for nearly six decades before its Independence. Omar al-Bashir, then President of Sudan and a former army veteran, who ruled the country from 1989 to 2019, indeed talked about the right of South Sudan to secede from the mainland. Once a powerful strongman who ruled one of Africa’s largest nations with an iron fist, Bashir commented that the referendum for South Sudan was helpful as he believed “unity could not be forced by power”. However, then he was of the opinion that secession was not the answer for bringing an end to the myriad of problems of South Sudan. He had said, “The stability of the South is very important to us because any instability in the South will have an impact on the north…The South suffers from many problems. It’s been at war since 1959. The South does not have the ability to provide for its citizens or create a state or authority”.

The brutal man, who ruled his country for three decades and having the scar of carrying genocide in Darfur, almost turned his words prophetic over the newly independent South Sudan. As of this date, Juba is fervently struggling for peace, stability and unity.

This month the country is celebrating its first decade of Independence, but there is not much to rejoice. Since its separation from mainland Sudan, it has been experiencing continued violence, endemic corruption, poverty and underdevelopment. South Sudan is located in the northern and eastern hemisphere of the planet earth. It is bordered by six other African nations — Sudan to the north, Ethiopia to the east, Kenya to the south-east, Uganda to the south, the Democratic Republic of Congo to the south-west and Central African Republic to the west. The country has been undergoing a number of significant changes since 2011. At its birth, South Sudan had only 10 provincial States, but in 2015, it was divided into 15. In 2017, the country was further made into 32 provinces purely based on ethnic lines. However, after three years of running a troubled Government and signing of a peace treaty in February 2020, the South Sudanese Civil War came to an end. And with this, Juba decided to roll back the ethnic divisions of States created in 2017 and reverted to the earlier system of 10 States.

How the Civil War began in South Sudan? The two titans — Salva Kiir, the President, and Riek Machar, the former Vice President, were fighting to claim their rights over the fragile nation. This conflict started just after two years of the country’s Independence from the mainland Sudan. The vast majority (over 80 per cent) of the people fleeing South Sudan in the past are women and children. And sadly, children make up to the 63 per cent of the total South Sudanese refugees during the country’s recent Civil War that lasted between December 15, 2013 and February 22, 2020, covering a period of nearly six years, two months and one week. Since the Civil War erupted, nearly 400,000 people have been killed and over 2.3 million became refugees and asylum seekers.

In November 2013, President Kiir, from the Dinka ethnic group, dismissed Machar who belonged to the Nuer group of South Sudan. Following the rumours of a possible coup, the President immediately replaced the members of the Army and the Government. He added fuel to the fire by dismissing all the main organs of the Sudan People’s Liberation Movement (SPLM), citing that their time in office had expired. Further, massive violence sparked between the armed groups of Kiir and Machar, when the President accused the latter of plotting a coup against him in December 2013. Gradually, the violence took an ethnic turn by dividing and arming militias and villagers belonging to the Dinka and Nuer groups. There have also been allegations by both sides of crimes against humanity, including rape, extra-judicial killings, abductions, torture and the use of child soldiers in the war.

How has the UN responded to the crisis so far? As large swaths of South Sudan are facing violence against civilians, particularly children and women, the UN peacekeeping mission in the country known as United Nations Mission in South Sudan (UNMISS) is establishing a number of camps to protect the victims. Nicholas Haysom, the UN Secretary General’s Special Representative for South Sudan briefed the UN Security Council about the current situation on June 21, 2021. In his briefing he said: “I would like to highlight the pervasive insecurity, in particular inter-communal violence, which continues to obstruct the realisation of a durable and sustainable peace in South Sudan. This year more than 80 per cent of the civilian casualties were attributed to inter-communal violence and community-based militias”. Therefore, the UNMISS has a turbulent road ahead in South Sudan.

What is the latest peace deal? On September 12, 2018, President Kiir and Vice-President-turned rebel leader Machar signed a renewed peace agreement to put an end to the five-year long ethnic war in South Sudan. The agreement known as the Revitalised Agreement on the Resolution of the Conflict of the Republic of South Sudan (R-ARCSS) was nothing new and indeed built upon a previous peace deal signed by both the leaders. It’s a renewed peace process as both these rebels have come across a number of negotiations in the past. But then all of them failed as both the parties keep violating the terms for strengthening their own militias. The R-ARCSS envisioned an eight-month “pre-transitional period” that focussed largely on stabilising the security situation of the country. After eight months, the agreement stipulates the starting of another eight month “transitional period” when the country would be led by a “Unity Government” with Kiir as President and Machar as Vice President. Needless to say, that the proposed Unity Government structure resembles the Agreement on the Resolution of the Conflict of the Republic of South Sudan (ARCSS) signed on August 17, 2015. Even under that agreement, Machar was supposed to be appointed as the Vice President of the country. But unfortunately, the formation of that Government was delayed till April 2016 as Machar refused to travel to the Capital city, fearing for his security and life. Eventually, fierce fighting between

the two groups began in the summer of 2016 in Juba and Machar had to leave as widespread violence engulfed the entire country.

A UN Report highlighted that the slow implementation of the revitalised peace accord may push the country again into a chaos. Experts on Africa say that political, ethnic and military divisions are growing across South Sudan. The parties and factions that signed the peace deal are again fighting in many places. Also, the UN says that nearly 100,000 people are facing famine like situations in the war-torn nation.

Even barely a year after signing the peace deal in 2019, South Sudan’s National Security Service recruited a force of 10,000 fighters in President Kiir’s stronghold. These were all apparently violating the peace accord. The Kiir administration is taking very little interest in following the terms and conditions of the deal. Sadly, an often-overlooked conflict, the South Sudanese civil war has already taken the lives of more than 400,000 people so far. Violence, disease and dire scarcity mar this land-locked country in East Central Africa even after a decade of its Independence. Women and children are largely bearing the brunt of the violence.

However, the 10th anniversary of South Sudan’s historic achievement of Independence provides an opportunity to inject fresh initiatives to the ongoing peace process. The idea is to bring back peace, stability and growth that all South Sudanese people deserve today. Notwithstanding the recent signs of tranquillity, the overall implementation of the revitalised agreement is abysmally slow. Nevertheless, the feeble and almost paralysed institutions of State governance throughout South Sudan have directly helped the perpetrators of violence to exploit the existing perennial ethnic and communal cleavages. Entrenched insecurity has prevented the regular cultivation and herd rearing practices of the traditional communities in the countryside leading to food shortage and famine.

Above all, the global Covid-19 pandemic and a continued economic downturn are deteriorating the current state of affairs in South Sudan. The weakened law and order and rising criminal networks are making huge roadblocks in bringing peace back. It is time for Kiir and Machar to rebuild the newest nation of the world once again. Let Juba jubiliate!