The China-Iran deal is more than just oil

The China-Iran deal is more than just oil 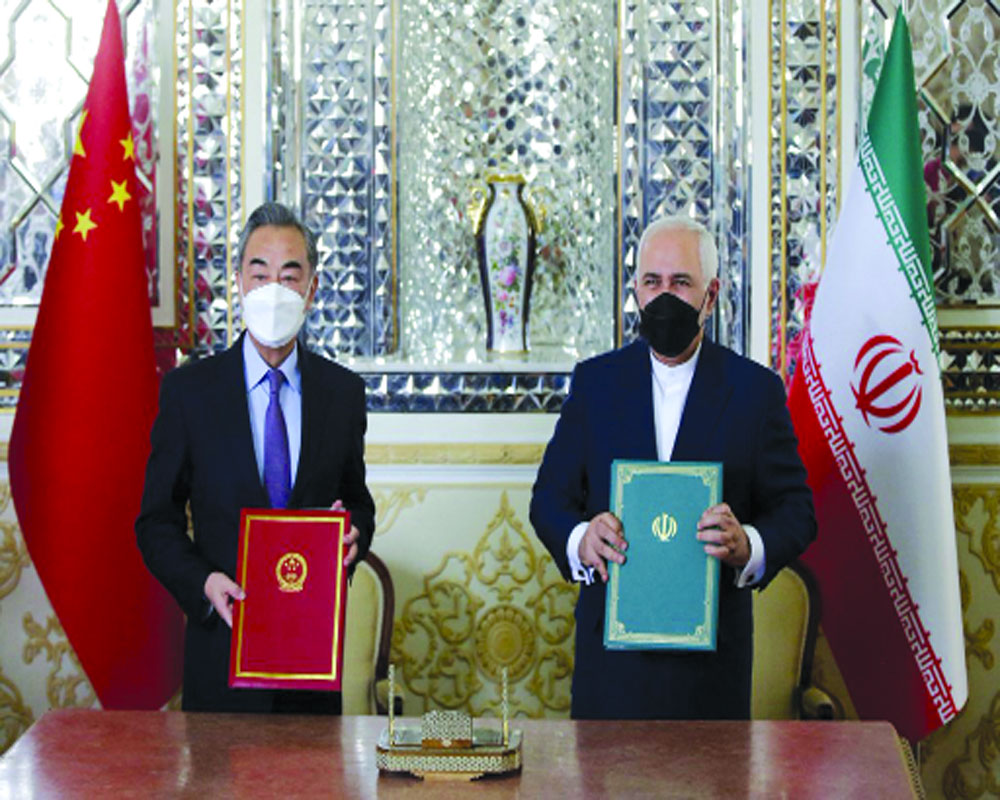 Even before the four large democracies in the Indo-Pacific were able to create a clear road map towards building deterrence against China in 2017, Beijing had begun spadework to offset power equations away from the Asian continent, in the Middle East. Its strategy was a message to both, the US and India — the two Indo-Pacific democracies impacted most by China’s Middle East power play — to jettison their efforts to contain Beijing’s aggression in Asia. China’s Middle East strategy rested on the ambition to challenge the US’ power and create uncertainty for India’s oil needs. It is in this context that the China-Iran partnership — which was in the works since 2016 and announced last week — needs to be viewed. The deal could be the gateway to China’s larger ambitions in the region, with an aim to subvert the US and Indian interests. In the last decade, China has made significant investments in the Middle East as it deepened business interests with the US’ allies like Saudi Arabia and Israel through the Belt and Road Initiative (BRI). Beijing  redoubled efforts to forge strategic and military ties with America’s bête noire, Iran. China views the Middle East as the next arena for its power struggle with the US, which under the Joe Biden Administration is taking a firm position against Chinese President Xi Jinping’s revisionist tendencies. But unlike the Indo-Pacific, where China unilaterally changed the status quo and is powerful enough to bully its smaller maritime neighbours; in the Middle East, Beijing has cultivated a network of allies. Iran is the fulcrum of this exercise, with Russia playing a key role. China’s tried and tested model, which is universal in its appeal, simple in its execution and attractive to like-minded countries, has allowed it to gain a foothold in the Sunni-majority Saudi Arabia, Shia-dominated Iran as well as their arch-rival, the Jewish Israel.

The China-Iran partnership, which got a major fillip with the announcement of the 25-year $400 billion deal, is more than a barter oil deal. Reeling under years of crippling US sanctions, the deal with China can revive the Iranian economy. Add to this the mess caused by policy flip-flops by successive US administrations (the Joint Comprehensive Plan of Action, 2015, had lifted the sanctions, which came back in May 2018), providing a perfect opportunity for China to make inroads into Iran. For China, Iran serves the opportunity of becoming a “hub” for its BRI programme in the Middle East. Through its wide network in the region, China hopes to create multiple “spokes” in neighbouring countries like Iraq, Syria and so on. Inking large infra deals under the BRI will further increase Beijing’s influence in the region. In fact trading volumes between China and Iran had become noticeable from 2010 onwards, but the commensurate rise in Beijing’s influence began after 2013, post the rollout of the BRI programme.

Apart from common economic goals, the pact furthers geopolitical considerations of both nations. China’s covert oil purchases from Tehran have defied US penalties, indicating its willingness to reach out to the US’ foes to build an alternative power axis. Though in absolute numbers, Chinese imports from Iran pale in comparison to its largest supplier Saudi Arabia, the violation of sanctions displayed China’s keenness. Apart from trade with Iran, China’s trade with the UAE and Saudi Arabia has also zoomed, which now views itself as a potential counter to the US’ overarching presence. For Tehran, undercutting US dominance, access to superior weaponry and continuation of its nuclear programme were major goals that it’s partnership with China fulfilled. Iran’s ‘Look East’ policy, under which it increased the scale and scope of its engagement with China, was an attempt to boost its own regional influence and military might.

The China-Iran partnership at its core is an arrangement that serves geopolitical interests of two countries with similar political systems and a common desire to topple the existing world order. It meant the two partners would back each other in all scenarios which undercut the role of their principal adversary, the US, and its allies in the region. This translates into China’s support for Iran in all those efforts which would strengthen Tehran at America’s expense. Given China’s track record of abetting and aiding illegal proliferation of nuclear technology (it provided Pakistan the same in the 1980s), it is safe to assume China’s covert assistance to Tehran’s nuclear programme would form an important aspect of the contours of their partnership. As a veto-wielding member of the UN, it is highly probable that China would paralyse all multilateral efforts that would seek to put a lid on Tehran’s nuclear programme.

A UN censure against Tehran’s nuclear programme or a UN proposal stalling it are likely to be vetoed by Beijing since it would hurt China’s interests despite being a pronounced security threat. Just as Beijing backed Pakistan-based global terrorists due to the latter’s geostrategic utility in limiting India; China’s support for Iran’s nuclear programme would be brazen. Not just nuclear weapons, post the deal, Tehran can get more traditional arms from China based on the history of large-scale weapons trade between the two countries during the Iraq-Iran war. Though sanctions (and the UN resolution) came in the way of continuing this, it would be prudent to assume such deals would continue covertly (or otherwise) after the two enhanced the scope of their partnership.

For China, Iran is also its access point to Syria, the war-torn country where Beijing has so far had a minimal role to play. Though it used the pretext of counter-terrorism efforts by citing a large number of radicalised Uighur Muslims to enter the Syrian civil war; China has been at the periphery of the civil war. As the second-largest economy and the “next superpower”, Beijing felt it could not just sit out of discussions regarding Syria and deserved to be a key decision-maker of the country’s fate. When Beijing backed the Russian-supported Assad regime, not only did it frustrate efforts by Western powers, it also showed the power of compounding with China and Russia coming together. Its partnership with Iran will allow Beijing to play a more dominant role in Syria. Issue-based Russian support will provide further clout to China and its allies. Of course, in Syria there are vital commercial interests as well. At some point, large infrastructure contracts will be awarded to re-build Syria and China is aiming to get a large chunk of the billions of dollars’ worth of prospective business. With Iran being a “hub’ in its BRI, Syria could be an important “spoke.”

China’s ambitions for the region became clear after its military exercises with Moscow and Tehran in 2019. Russia’s deep presence in the Middle East and its proxy network which allows it to wield influence in the region makes it a vital tool for fulfilling China’s geostrategic ambitions. The trilateral partnership between China, Russia and Iran — which furthers geostrategic interests of all three — will be further boosted with the signing of the China-Iran deal. For Russia, it cements its influence in the region, which extends from Syria to Turkey. For China, it provides deeper linkages in the region to create a parallel power centre to the US. For Iran, it offers an opportunity to position itself as a country with multiple suitors. The 2019 Gulf of Oman exercises indicated that the existing power equation in the Middle East was vulnerable to a counter. The coming together of China and Iran, with active support from Russia, with a focus on security and Intelligence cooperation, aims to provide that.

The urge to be in battles that are not its own, meddle in regions where it has traditionally been a marginal player and to strike pacts with totalitarian countries is driven by Xi’s hunger to disturb power equations in the Middle East. China’s pact with Iran is meant to address some of these revisionist tendencies, besides hurting the security calculus of the US and India. Viewing the deal between Beijing and Tehran only as a long- term oil contract would, therefore, be myopic.