The coup in the neighbourhood

The coup in the neighbourhood 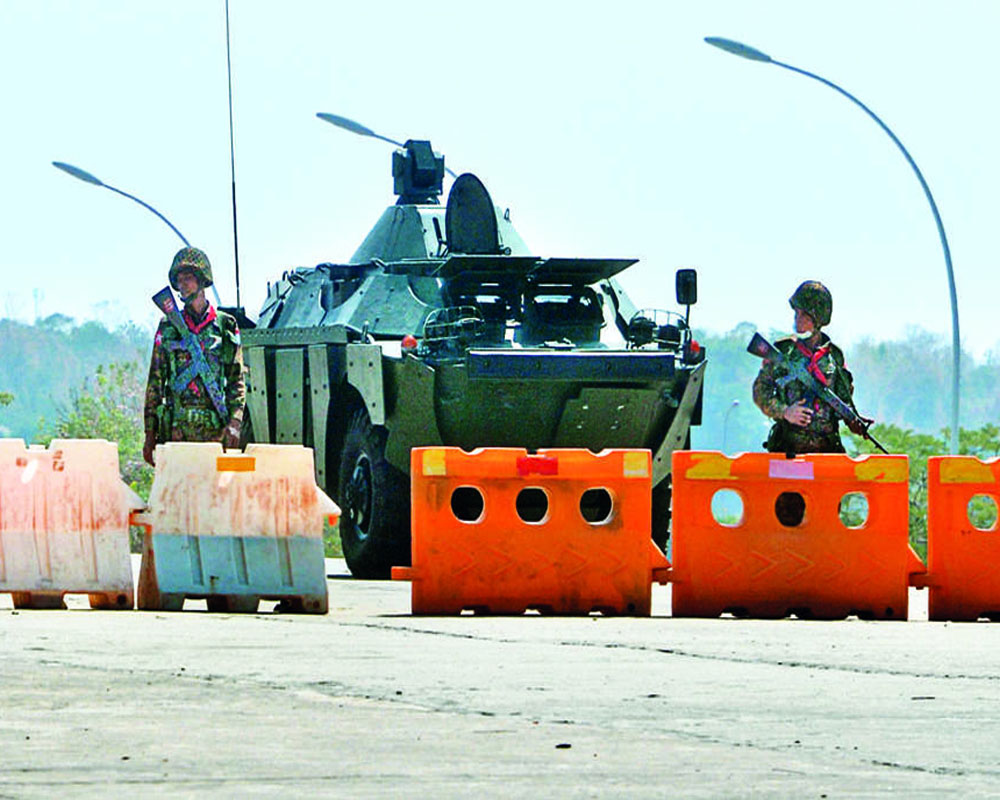 According to a report in Al Jazeera, an emergency session of the United Nations Security Council (UNSC) failed on February 3, 2021, to adopt a statement on the military coup in Myanmar on February 1. The statement had condemned the coup, called upon the military to respect the rule of law and human rights, and demanded the immediate release of those unlawfully detained. The report further said that the statement had demanded repealing the state of emergency, which the Myanmar military (official name Tatmadaw) had imposed, besides appealing to “all sides to adhere to democratic norms”. The statement, says the report, was grounded by China and Russia which had “asked for more time”. The chances of it, or another one adequately condemnatory of the coup, being adopted are slim. Russia and China are no champions of democracy.

This is a shame. The coup has halted the transition to democracy which had started in 2008 with the adoption of Myanmar’s current Constitution prepared by the Tatmadaw. The latter has justified its action by alleging that Aung San Suu Kyi’s National League for Democracy’s (NLD) sweeping victory — 396 seats out of 476 in the Lower House of Parliament — in the November 2020 elections was fraudulently obtained. It claimed to have detected 8.6 million cases of irregularities. The Union Election Commission, which conducts elections in Myanmar, has, however, emphatically said that it had found no evidence of any voting malpractice or fraud.

Widespread electoral fraud, had it occurred, would have been widely reported in international media given that Suu Kyi has lost its favour because of her stand on the Rohingya issue. Besides, the Tatmadaw’s record is significant. Suu Kyi’s NLD won a massive victory in the 1990 elections. It rejected the results, put her under house arrest which lasted 15 years, and imposed a horribly repressive regime on the country.

There are other reasons. Last year, Suu Kyi sought to reduce the Tatmadaw’s share of reserved seats in both Houses of Parliament from 25 per cent to five per cent. The move failed but the intention to clip the military’s wings it conveyed rattled the generals who, like their Pakistani counterparts, reportedly have links with many lucrative economic ventures, which they may lose under a strong civilian Government.

What now? The Myanmar police charged Suu Kyi in a court on February 3 claiming that walkie-talkie radios, found during a search of her home in the capital, Naypyidaw, were imported illegally and used without permission. They sought her custody till February 15 “in order to question witnesses, request evidence and seek legal counsel after questioning the defendant”.

The charge has been widely condemned as spurious. Suu Kyi had every opportunity to legitimately import the walkie-talkie sets when she was heading the Government as State Counsellor. Besides, the charging of Myanmar’s overthrown President Win Myint with offences under the Disaster Management Law indicates the targeting of the NLD’s top leadership. In a report, Al Jazeera has quoted Ali Fowle, reporting from Myanmar, as saying that the country’s import-export Act was “notoriously vague”. She added: “It could be anything from a fax machine to a walkie-talkie.

It’s a notorious law because it was used under the former military regime all the time to frame political prisoners.”

Not surprisingly, UN spokesman Stephane Dujarric told reporters that the charges against Suu Kyi “just compound the undermining of the rule of law in Myanmar and the democratic process”. He added: “We continue to call for her immediate release and the President’s immediate release and all others who have been detained by the military in the last few days.” The chances of the military obliging are negligible. Nor can one foresee the protests, which have broken out in the form of doctors and other staff staying away from Government hospitals and people banging their pots, snowballing to oust the regime, which will stop at nothing. It has already banned Facebook, used by the protestors, at least until the end of February. China and Russia will back the generals. Much will, therefore, depend on the pressure that the US and European countries, which have strongly condemned the coup, bring to bear on the generals.

India’s External Affairs Ministry had issued a statement on February 1: “We have noted the developments in Myanmar with deep concern. India has always been steadfast in its support to the process of democratic transition in Myanmar. We believe that the rule of law and the democratic process must be upheld. We are monitoring the situation closely.”

India has to tread with caution. The Tatmadaw has been cooperating closely with it in dealing with the ethnic insurgents of its North-East. It has developed deep economic ties with Myanmar and, in 2019, emerged as the latter’s largest supplier of military hardware, selling arms worth $100 million. It cannot, however, watch the rape of democracy in Myanmar silently, and must continue expressing disapproval of the Tatmadaw’s action and pressuring it firmly to release Suu Kyi and the others, and allow her party to form the Government on the basis of the November election’s results.