The endgame in Afghanistan

The endgame in Afghanistan 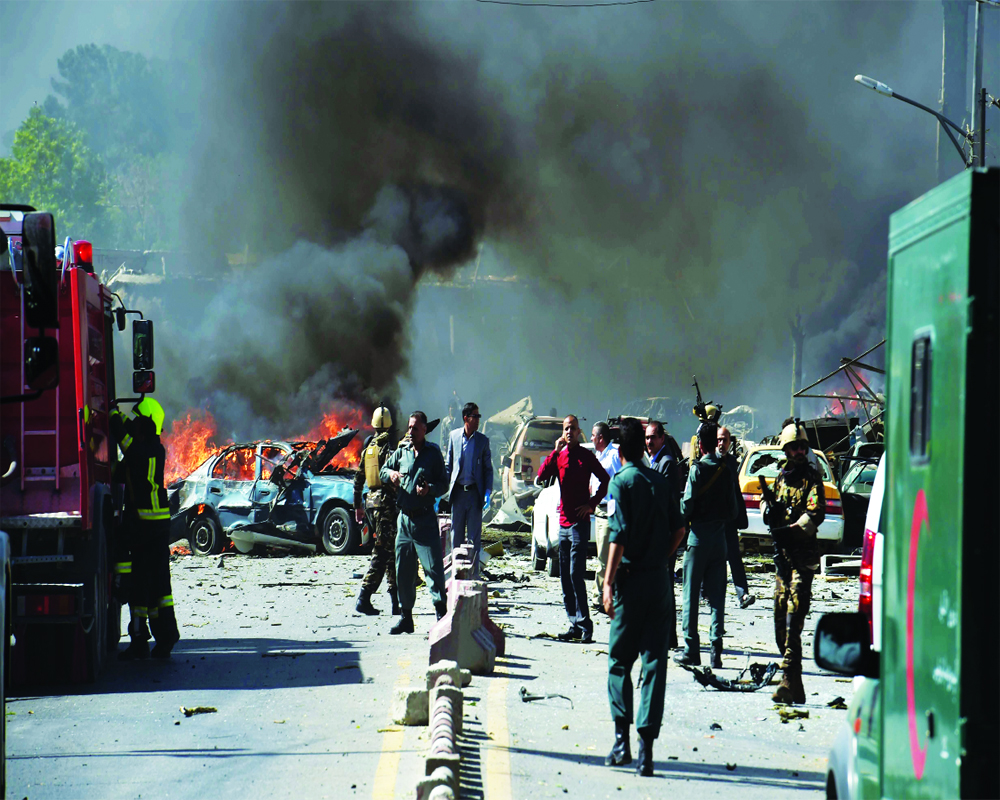 There’s a host of implications emanating from the withdrawal of American troops from that country, and India needs to watch out

The latest available estimates of the number of people, mostly schoolgirls, killed in three blasts in front of a co-educational school in Kabul on May 8, vary from at least 60 (BBC) to over 85 (CNN). The figure may rise further by the time this column is published. The diabolical intent to kill as many as possible is clear from the fact that a car bomb was first detonated and two improvised explosive devices followed as the girls rushed out of the school in panic.

Two questions arise. Who is behind this ghastly crime? What are its implications? As to the first, no one has claimed responsibility. The Afghan Government has blamed the Taliban, which has denied involvement and condemned the strike. This leaves one with the Islamic State, which has staged terror attack in Kabul and elsewhere in Afghanistan and which retains its ability to strike despite losing a great deal of territory over the months.

The Taliban are the more likely culprits. There is no reason why one should believe them, particularly when the May 8 blasts have to be seen in the background of the surge in their attacks and terror strikes following President Joe Biden’s announcement that all American troops will leave Afghanistan by September 11. They know they will not win an election and they do not believe in democracy. They want to control Afghanistan by force and establish the Sharia rule.

Will they be able to do it? What will happen if they do? The answer to the first would depend on the fighting qualities of the Afghan National Security and Defence Forces (ANDSF), the support they continue to receive from the US and its NATO allies. As to the first, despite serious problems of desertion and unwillingness to enlist, the Afghan National Army (ANA), the land warfare arm of the ANDSF, has emerged a battle-hardened force capable of confronting the Taliban and other terrorist organisations it faces. Its commando and special forces units have been particularly successful.

Against this, the harsh fact is that the Taliban have expanded their control over huge tracts of Afghanistan’s countryside and some cities, besides inflicting a number of heavy defeats on the Afghan troops. At least some of the reverses the latter suffered the beginning of 2020 are attributable to the Trump administration’s atrocious policies. These included asking the Government forces early in 2020 to go on the defensive in the interest of its peace negotiations with the Taliban, and arm-twisting it into agreeing to the Taliban demand of releasing 5,000 of their fighters in Afghan jails as a pre-condition for talks. Many of the released fighters have gone back to combat despite the Taliban’s promise that they would not do so.

The Taliban, however, began gaining ground even before the Trump Administration’s policies and pressures hampered the ANDSF’s operations. Also, while the capabilities of the Afghan troops have improved, a big question mark hangs against the future availability of effective air support, which has played an important role in many of the ANA’s successful operations. According to one estimate, 80 to 90 per cent of the air support to it is now provided by the fledgling Afghan Air Force (AAF).

The AAF, however, has been supported by the massive air power of the US. Also, international contractors, now doing the bulk of the maintenance work on its planes and helicopters, will depart with the American troops. This will seriously affect its operational capabilities. This underlines the importance of continued American aid. On July 7, 2012, Hillary Clinton, then US Secretary of State, announced in Kabul that President Obama had designated Afghanistan as a major non-NATO ally of the US. The questions are: How much and of what kind?

Apart from military hardware, there is a need for funds. Countering a blend of insurgency and terrorism is a very expressive business. The US has provided over $86 billion as security assistance to Afghanistan between financial years 2002 and 2019. Since 2014, it has been providing between five and six billion dollars per year to fund the ANDSF. How much and what form of assistance will Washington provide Afghanistan after the withdrawal of its troops?

Clearly, the military outcome in Afghanistan hangs in the balance. So does the fate of Afghanistan. All indications are that the Taliban have every intention to re-impose the medieval, authoritarian theocratic system that had reduced Afghanistan to a cleric-administered prison. As Ahmed Rashid wrote in Taliban: Islam, Oil and the New Great Game in Central Asia, edicts of the Taliban’s Department of Promotion of Virtue and Prevention of Vice “had changed the lifestyles of Kabul’s once easy-going population and forced Afghan women to disappear from public view”.

India needs to watch out. As the diversion to Kandahar of the Indian Airlines hijacked Flight IC-814 in December 1999 showed, the Taliban were actively promoting terrorism against it by Jaish-e-Mohammed and Lashkar-e-Taiba. Do we have a coherent policy to meet the challenge?