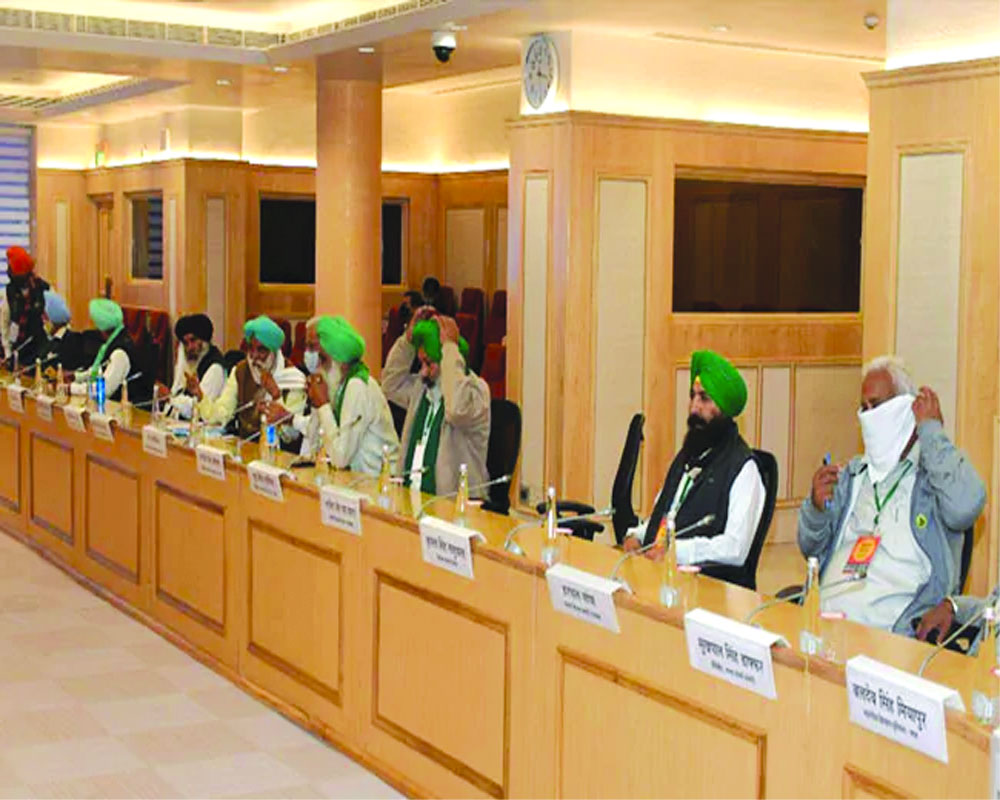 Whosoever wins this ‘war of prestige’, the poor peasants will still remain at the receiving end

No matter who wins the tug of war between the farmer unions and the Government, the poor cultivators will continue to remain at the receiving end. Who are these tens of thousands of farmers protesting on Delhi’s borders for almost two months, demanding a repeal of the three new farm legislations and remunerative Minimum Support Price (MSP)? They certainly do not belong to the class of peasants that is neck-deep in debt and many of whom die by suicide every year as they see no option to bail themselves out of the vicious cycle of interest payments on loan by moneylenders. A majority of those camping at the interstate borders are big and upper-middle class landlords from Punjab, Haryana and western Uttar Pradesh who are part and parcel of the strong arhatiya (commission agents) lobby, a community that drives the Agricultural Produce Marketing Committee’s (APMC’s) mandis. These farmers constitute a sizeable chunk of the vote bank of various political parties who cannot afford to go against the populist stance taken by the community. Only the APMC-licenced traders are allowed to purchase produce from farmers within that particular APMC’s jurisdiction. This helps the cartel of traders and prevents the hardworking farmers from receiving a fair price for their produce. This is why, perhaps, the hectic parleys and several rounds of dialogue have yielded no result and the farmer leaders have even turned down the Centre’s offer to put the new laws on hold. The latest round of talks on Friday also remained inconclusive, with no date fixed for the next meeting. The growers remain adamant on the full repeal of the farm Acts and for enacting a legislation on the MSP. The farmers have also raised doubts over receiving fair treatment at the hands of the members of the Supreme Court-appointed expert committee and termed it “biased”. On the other hand, the apex court has made it clear that the panel, tasked to submit its report after noting the farmers’ reservations, would proceed with or without their participation.

However, the farmers’ apprehensions cannot just be brushed aside. The NDA Government’s haste in finalising the three laws, the lack of consultation with stakeholders and the Bills’ passage in Parliament without thoroughly discussing and debating these ought to raise a reasonable doubt over the Centre’s intention. Further, these laws were first introduced in June 2020 as Ordinances before being approved by Parliament in September by a voice vote. The farmers allege that the Centre has made the laws for benefiting big corporate houses and is not concerned about the welfare of the peasants. It cannot be denied that by promoting private investment in the sector and allowing outside-APMC trade of farm produce, the Government will subsequently buy less from farmers, and it will eventually make the MSP system irrelevant. Further, there is no denying that India’s MSP system is the costliest Government food procurement programme in the world. It’s high time the Government and the farmers think about the pertinent issues impacting the agriculture sector. The Green Revolution has given us food self-sufficiency but the chemical fertiliser-centric farming has also led to enormous health and environmental hazards, besides degrading the soil’s fertility. These harmful carcinogens have become embedded into our food web. Further, the introduction of hybrid and transgenic varieties of seeds and crops, just for the sake of increasing productivity and meeting the market demand, is a potent threat to indigenous varieties. These local varieties are naturally resistant to many diseases and pests, and are part of our rich genetic stock. Apart from focusing on eco-friendly agriculture, the Government must devise an effective policy to help the poor peasants who are in distress and who are always at the receiving end, no matter what.