The Generals in their labyrinth

The Generals in their labyrinth 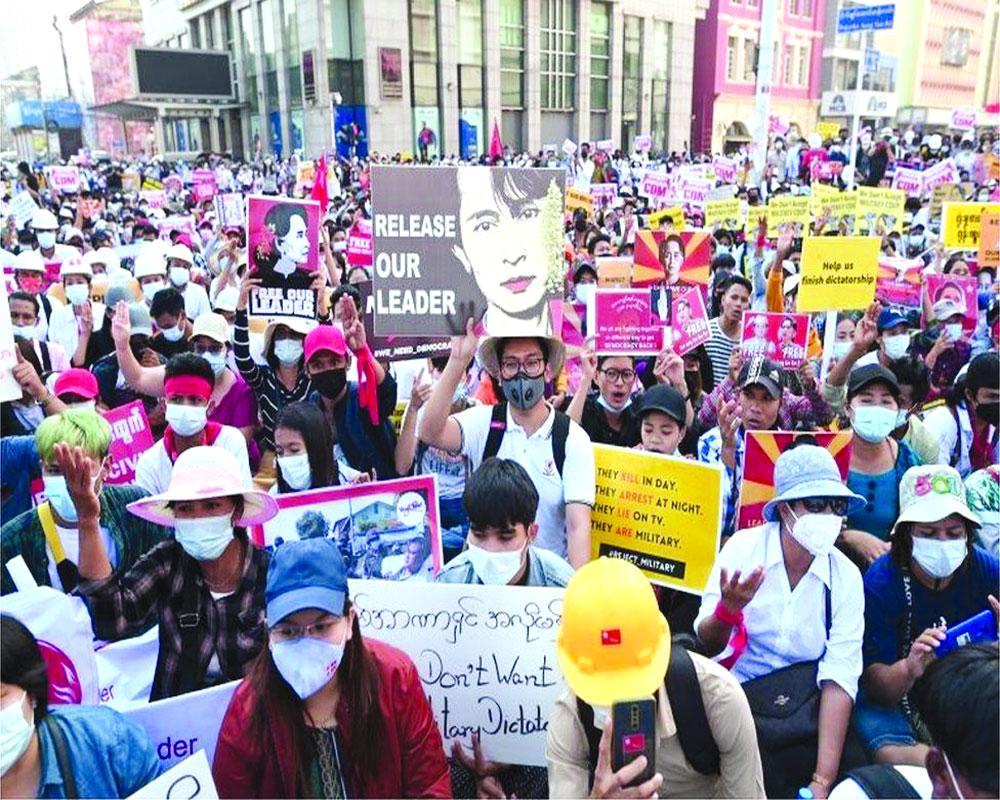 The coup by Myanmar’s rogue military, officially called Tatmadaw, has clearly triggered a growing confrontation between it and almost the entire people of the country. Except large-scale killing of civilians, in which it has a record not many uniformed forces can match, it has resorted to almost every repressive measure in the book for stamping out mass upsurges. It has proclaimed a state of emergency which is to last for a year and amended the penal code prescribing 20 years’ imprisonment for inciting hatred for the Government or the Army or hindering efforts of the security forces to ensure State stability. Seven years in prison is the punishment for preventing the security forces from performing their duties, and three years for spreading fear, “fake news” or agitating against Government employees. All this was besides the power given to the Tatmadaw to detain people indefinitely and/or search private property, besides revalidating a law requiring people to report overnight visitors to their homes.

The steps on the ground include the deployment of troops and armoured vehicles on the roads of Yangon, Myitkyina (capital of Karen State) and Sittwe (the capital of Raknine State), firing of rubber bullets, the use of water cannons against demonstrators, arrests during night curfew hours and detention of a wide range of people including political leaders, Government officials, activists, journalists, student leaders and medical personnel. According to the Myanmar’s Assistance Association for Political Prisoners, the number of people arrested since the coup reached 495 on February 17 and was growing. Further, the Tatmadaw has announced that it had issued warrants for the arrest of six celebrities, including a film director, actors and a singer, under an anti-incitement law for instigating civil servants to join the protests. Gatherings of five or more persons have been banned.

All this notwithstanding, the civil disobedience movement continues to swell. Yangon witnessed on February 17 hundreds of thousands of people attend the largest single rally since the beginning of the protest movement. The movement has united nearly 7,50,000 doctors, lawyers, civil servants, railway workers, electricity providers and others, including Government employees working in tax offices and the general administration. Both train services and power supply have been disrupted. Business interests of the Tatmadaw and the Government functions essential to military rule have been targeted.

Meanwhile, Hannah Beech points out in a report in The New York Times of February 17 that the atmosphere in the daily protest rallies in Myanmar’s major cities is that of a cultural carnival. “Graffiti artists,” she adds, “have spray-painted messages mocking Senior General Min Aung Hlaing, the Army chief who staged the coup. Poets have declaimed in angry verse. A cartoonists’ union marched holding hand-drawn figures. Street dancers twirled with abandon.”

The Tatmadaw, however, refuses to concede the civil disobedience movement’s demand to undo the coup, release Aung San Suu Kyi and others arrested and allow her party, the National League for Democracy, which swept the November 2019 parliamentary election, to form a Government. On the other hand, it seems set on pursuing a course of keeping her under detention by levelling utterly spurious charges of illegally importing and possessing six walkie talkie radios and violating the country’s natural disaster laws. Also, it continues trying to crush the civil disobedience movement with repression, though it has not yet resorted to the kind of savage violence it used to crush pro-democracy protesters in 1988 and Buddhist monks, pro-democracy activist and others who, in August and September of 2007, peacefully demonstrated against the Junta’s nearly two decades of dictatorial rule and economic bungling.

Three questions arise here. Why has the Tatmadaw not unleashed that kind of murderous violence this time? Is it likely to do so? How can the rest of the world prevent such an eventuality? As to the first, it clearly did not anticipate the kind of nationwide upsurge their coup has provoked. Second, it is worried about the economic consequences of such a bid. The Generals have extensive involvement in economic ventures which will be affected if the economy falters as a result of domestic disorder and sabotage, and sanctions specifically targeting them.

The Tatmadaw may resort to a savage crackdown if it feels that it could afford the costs. Hence the democracies must disabuse it of any such idea, and make it clear that the Generals and their families will pay a very heavy price for any such misadventure. The US has slapped sanctions on 10 current and former Generals who led the coup and three economic ventures. It has also taken steps to prevent the Generals from improperly accessing more than one billion dollars in Burmese Government funds held in the US, and immediate action to limit exports of sensitive goods to the Burmese military and other entities associated with the recent coup. This is a good beginning. While condemning the coup and proposing resolutions critical of it, and supportive of democracy and Suu Kyi, the European countries have not taken comparable measures. They must put their money where their mouth is.