The Myanmar crisis lingers on

The Myanmar crisis lingers on 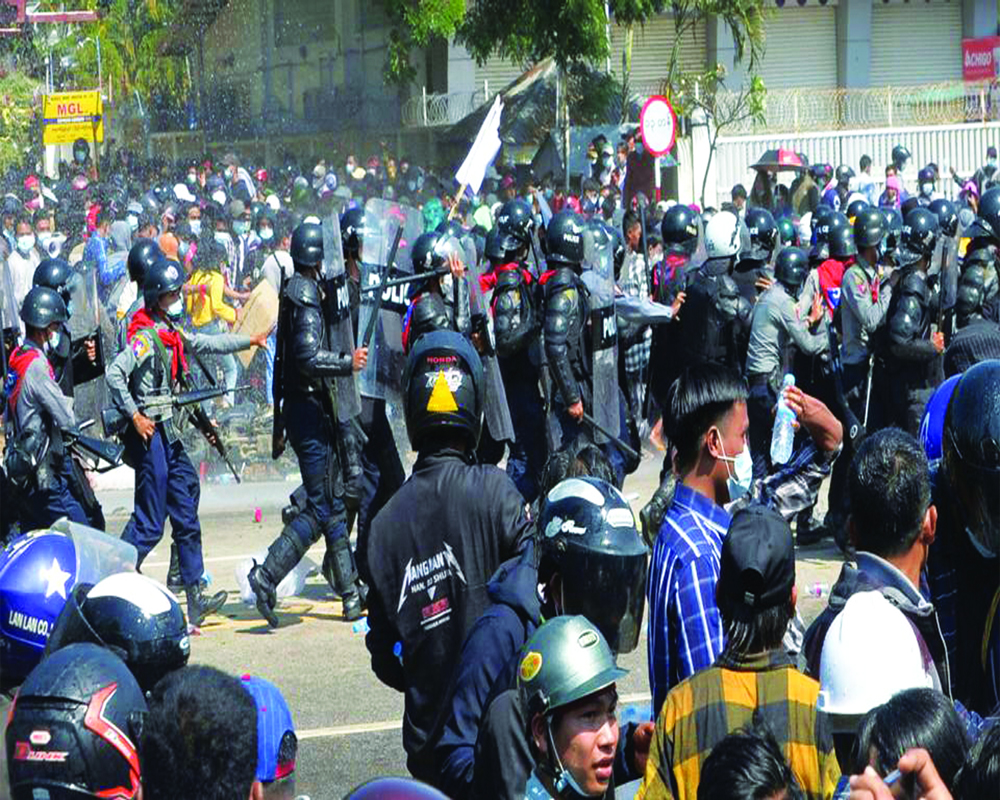 The most effective means of foiling a coup is a countercoup. In Myanmar, that will not happen as the military is rock solid and led by an officer corps that considers itself elite and the guardian of Myanmar’s core values.

As the coup in Myanmar enters its fourth month with multiple centres of resistance taking root, it will take more than an Asean summit and its five-point consensus agreement to unlock the impasse. Senior Gen Ming Aung Hlaing will not ride into the sunset anytime soon. Signs of a third front, after Kachins in the north and Karens in the east have battled central forces, are developing at Meiktilla in the central plains after rocket attacks struck the military base there. Meanwhile, the protestors have taken to flash marches that will enable people to disappear before confrontation with the police. The Civil Disobedience Movement (CDM) activists are asking people to start non-cooperation campaign by stopping payment of electricity, taxes and repayment of loans.

In its 73-year history, the Myanmar Army has never fought foreigners but its own people in internal wars. The coup has marked the battle lines between an Army led by the Burman-dominated officer corps and a range of opposition forces — the CDM consisting of youth aged 20 or below who have tasted a decade of democracy: the Committee representing National Parliament that has morphed into a National Unity Government. This organised resistance has the potential to explode into a civil war when some of the 20 Ethnic Armed Organisations (EAOs) like Karen or Kachin join the NUG to challenge the Tatmadaw, the primary centre of power. A call has been made by a Karen, General Baw Kyaw Heh, to all ethnic groups to unite to fight the Burmese military dictatorship. This could be a game changer.

The General has to decide whether to escalate the conflict into a bloodier phase or seek a modus vivendi through a mediated political dialogue. Aung San Suu Kyi’s National League for Democracy had won a clear and outright political victory trouncing the military-backed USDP. It seems inconceivable that the NLD’s victory can be set aside by the military on grounds of fraudulent voting. It will be unconstitutional. Can the clock be set back to January 31?

Hlaing is from the Army’s elite 77 Light Division. He was the mastermind of the ruthless operations against the Rohingyas in Rakhine in 2017 where this Division was employed. In the 1988 coup, 77 LID was used and 3,500 protestors were killed. But that was 30 years ago. The General’s aim is for Myanmar to return to 2011-16 when the USDP was in power and when he took over as the C-in-C in 2011. He does not have much time if he is to return Myanmar to his vision of a disciplined democracy. This goal is a bridge too far even for the Tatmadaw to achieve, especially in 2021. The General has to weigh in the consequences of the coup and preserving the gains the military has secured in the 2008 Constitution. By travelling out of Myanmar, attending the Asean summit, meeting UN envoy Christine Burgene and returning to his citadel, Hlaing has scored a diplomatic victory. Never before has a coup leader been treated with such respect and circumspection. Had he been in Europe, he would have been arrested for alleged genocide against the Rohingyas.

The widespread violence has threatened the economy and encouraged criminal activity. In the 1950s, Burma’s per capita income was higher than Thailand’s and Malaysia’s but today it is at the bottom of the Asean GDP. People have been fleeing from townships like Mandalay, Bago and Yangon into the interiors. A new transnational criminal activity hub — comprising small arms, narcotics and wildlife, coupled with an underground financial system reminiscent of the Golden Triangle of yore — has come up. It is a shame that a country which was the hot favourite of foreign investment and growth is suddenly moving in reverse gear. It is estimated the economy will shrink by 20 per cent in 2021-22. The latest UNDP report paints a grim picture: That 12 million people could fall into dire economic strait as businesses remain shuttered in a standoff between the junta and the CDM. The hardest hit will be the poor urban populations and the female heads of households will be the worst hit.

India has learnt to play ball with more than one power centre in Myanmar. It has welcomed the Asean initiative and will continue to play a constructive role in resolving the current situation through steadfast support of the democratic process. The end of this political process — when it is started, and a UN Civil Protection Force is accepted by the General —  will mark a political milestone in conflict resolution. Some Asean leaders are privately suggesting keeping Myanmar out of the grouping till the coup is undone. The consensus brief is either the first step towards reining in the Generals or, more likely, letting them buy time.