The Scourge of Forest Fires

The Scourge of Forest Fires 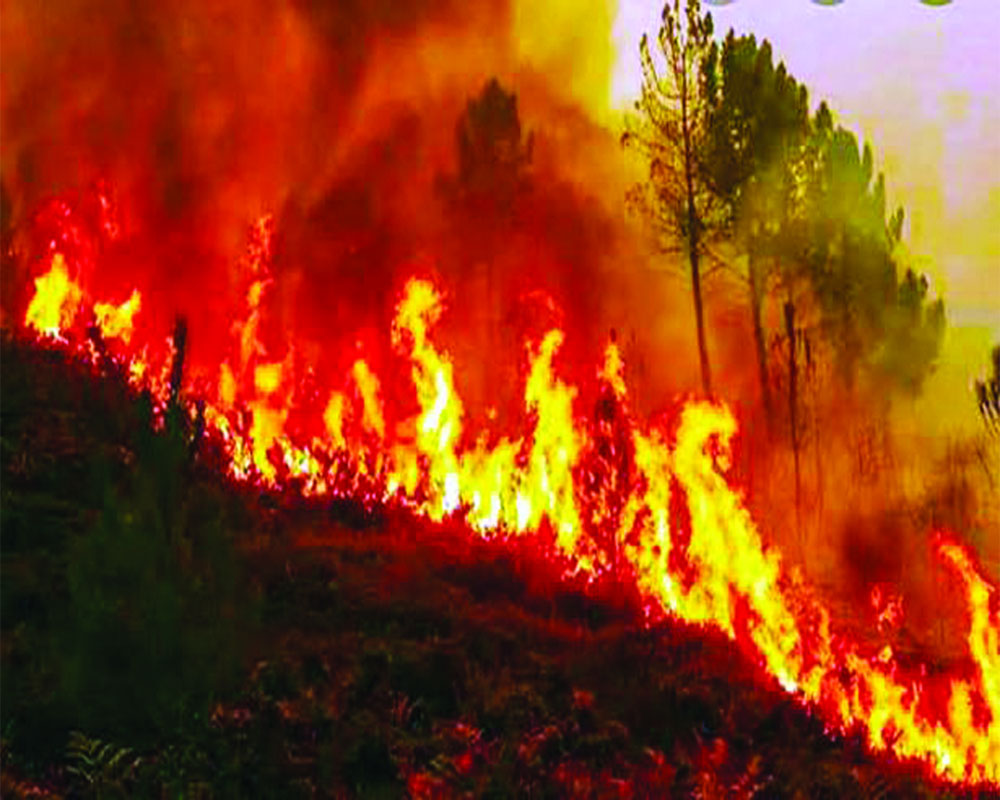 Precious forest resources, including the carbon locked  in biomass, are lost due to forest fires every year

The forests in Uttarakhand are in the grip of a massive fire these days; so much so that apart from destroying the rich bio-diversity, it has killed four villagers and injured a forest guard during  fire-fighting operations. Forest fires have become a recurring phenomenon in the State and every year thousands of acres of forests are engulfed by the raging inferno. Fires are a common feature in forests all over the country and sometimes the controlled burning of forest floor is used as a management tool to promote conservation by the foresters. The ecological impacts of forest fires are disastrous for the biodiversity and the forest hydrology. The forest department of Uttarakhand is failing year after year on prevention and control of the forest fires and prima facie it is gross negligence at all levels in dealing with the threat due to mismanagement, coupled with the shortage of resources.

The incidents of forest fires globally are increasing every year. In India through the Moderate Resolution Imaging Spectro-radiometer sensor data (MODIS) of the Forest Survey of India (FSI), 37,059 forest fires were detected during 2018. Precious forest resources, including the carbon locked in biomass, are lost due to forest fires every year, which adversely impact the flow of goods and services from forests.

The FSI website showed 3,23,414 fire points across the country, detected through satellite during  February 1- April 8, 2021, while Uttarakhand alone accounted for 1,31,61 fire  points.  More than 80 per cent of the forest fires are man-made and caused by the villagers, and the rest are due to natural factors like intense heat wave, lightning and friction in vegetation. The best strategy for forest fire control is in its prevention with mobilisation of resources, specially the local village communities, the Van Panchayats and Joint Forest Management. The forest fires can thus  be effectively prevented and controlled, provided the State Government and the forest department have the commitment for taking timely action. With the FSI now coming up with real-time monitoring of forest fires through satellite-based messaging to the Divisional Forest Officers, it should be easy for the field staff to control the forest fires, provided that they have cleaned the forest fire lines in time before the commencement of the fire season, in the month of November, and have in place an early warning system and a fire management plan in operation.

The Ministry of Environment, Forests and Climate Change, Uttarakhand Government, and the State Governments all over India must accept responsibility for their gross inaction. They must take control of enforcing the preparation of the forest fire management plan, risk assessment maps of the vulnerable areas and establish the early warning systems in each division before the month of November. The Centre had already released to all forest departments of the country the Compensatory Afforestation Fund Management and Planning Authority (CAMPA) funds to the tune of more than Rs 50,000 crore. Did the forest department earmark the CAMPA fund for divisional-level fire-fighting plan, and what is the role of officers and the Ministers in filling up the vacancies of  forest guards and other related ranks? The question is what has been done by the Uttarakhand Government to prevent forest fires?

(The writer is Chairman, Centre for Resource Management and Environment. The views expressed are personal.)