The Turkish angle in Sino-Pak dimension

The Turkish angle in Sino-Pak dimension 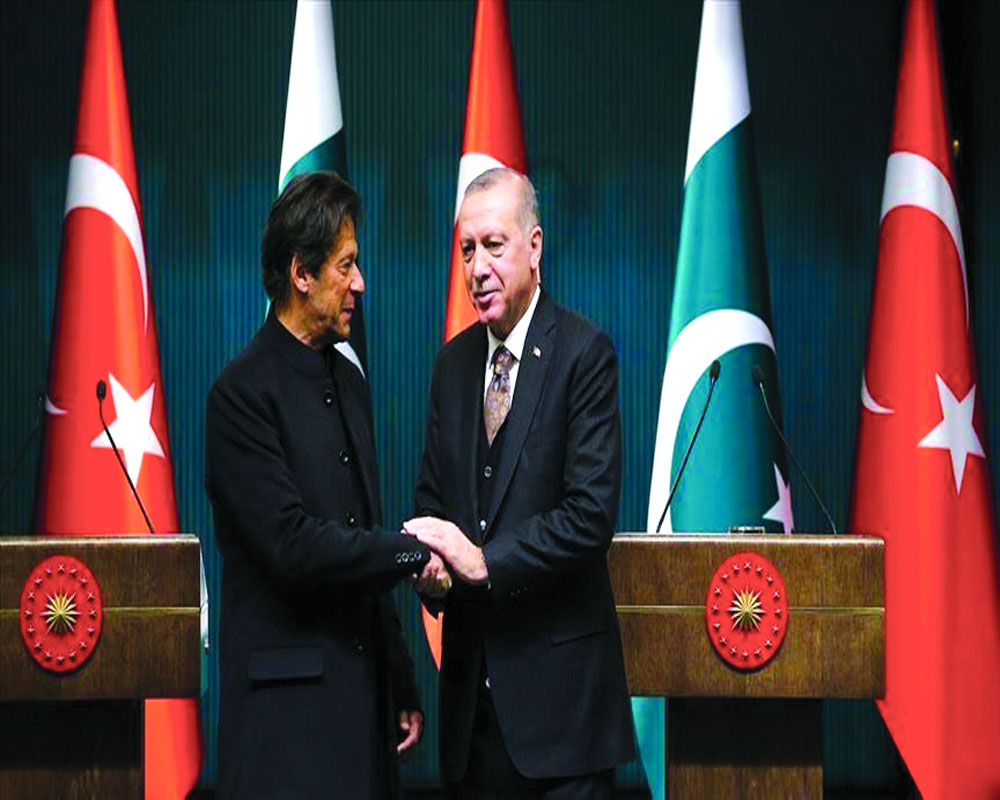 Turkey's decision to lend disproportionate support to Pakistan is part realpolitik, part desperation as it wants to get closer to China

The Turkish imprint on the subcontinental psyche has been complex and divisive since the arrival of Taimurlane, Mahmud of Ghazni and, later, Muhammad of Ghori. Popular perception on either side of the Line of Control (LoC) dividing the modern-day Indo-Pak realm varies, shaped by politics and the insistence of “two-nation” necessities from the Pakistani standpoint, which conveniently overlooks the historical pillage by the invaders. That wounded legacy and memories of bigotry and plunder at places like the Somnath Temple auto-instinctively became the default trigger for deification of these Turkish invaders in modern Pakistan.

Provocatively, the Pakistani military has named its missiles after these ruthless invaders i.e. Ghauri (medium-range ballistic missile), Ghaznavi (short-range ballistic missile) and so on. One of the 16 companies of the Pakistan Military Academy is called Ghaznavi, and the infamous and rogue Pakistani nuclear scientist, AQ Khan, personally built a mausoleum for Mohammad Ghori! Later, Pakistani dictators like Ayub Khan and Pervez Musharaf were particularly inspired by the Kemalist model and postured themselves on Turkish nationalist Kemal Ataturk. That historically the Turkish invaders ravaged the conjoined swathes of subcontinental land, that Mahatma Gandhi supported the Khilafat movement or that Kemal Ataturk was principally against religion in governance (hence antithetical to the two-nation idea) has been studiously ignored. In both the 1965 and 1971 Indo-Pak wars, Turkey was an odd supporter of Pakistan, even though there was no apparent dissonance with India.

Today, both Pakistan and Turkey are in the throes of political and societal revisionism, where they make even more common cause with each other. Both the Cold War US allies find themselves at odds in a recalibrated order that broadly splits the world into “democracies” and various shades of expansionist “autocracies” such as China, North Korea and Turkey. Pakistan, too, has failed to extricate itself from the Cold War sensibilities of nursing foreign insurgents on its soil and, therefore, the elements of its establishment (military, politicos and clergy) harbour stakes in the terror industry that militates against the interests of one-time allies, like the US. Similarly, Turkey under religio-conservative Recep Erdogan senses an opportunity to seize leadership within the Ummah by challenging the control of Saudi-led sheikhdoms, who have relatively nuanced their outlook by “opening up” and having warm relations with countries like India and Israel, to the discomfort of Pakistan.

The reciprocal and asymmetrical support plays out with Islamabad aligning itself to Ankara’s position in the Nagorno-Karabakh war, just as Ankara emerges as the only other (besides China) supporter of Islamabad on Kashmir. Washington DC faces a difficult challenge to control and balance conflicting interest with Pakistan, which it needs irreplaceably for securing American interests in Afghanistan and, with Turkey, where it has the strategic Incirlik Air Base that houses nuclear warheads. This leads to a constant tussle of pull and push which brings the Pakistani-Turkish relationship even closer.

Recently, the US put a spoke in the burgeoning military trade between Turkey and Pakistan when it blocked Turkey from supplying 30 Turkish ATAK T-129 attack helicopters (based on the US Agusta A129 Mangusta platform, with US-made engines) to Pakistan. Interestingly, the US had recently supplied India with 22 Apache attack helicopters. Importantly, this blockade was triggered by the Trump Administration and has now been reiterated by the Biden Administration — leaving Pakistan with no choice but to look at China for its Z-10 attack helicopters. This move will accelerate the looping of the triad entailing Turkey, Pakistan and China, wherein the Turkish jointsmanship with Pakistan in developing the Siper long-range missiles and the TF-X fighter jets could get access to Chinese technology.

Turkey has already signed a manufacture-and-technology-transfer contract with Pakistan for four Turkish-built MILGEM corvettes, whereas the air forces collaborate with the project of modernising Pakistan’s F-16 fleet as also Pakistan sparing its pilots to fly Turkish F-16s (following a Turkish purge of its fighter pilots suspected to be behind a botched coup attempt) to fly “mercenary missions”. For Turkey to lend disproportionate support to Pakistanis is part realpolitik, part desperation — as the two nations have the most powerful militaries in the Islamic world and the alliance facilitates the “China opportunity” for Turkey. In return, Turkey saves Pakistan from near-pariah status and parrots the tired “Kashmir” line that has lost its resonance in most countries within the Ummah.

The dangers of acceding to the basic instincts of both Turkey and Pakistan have started outweighing the benefits of tactically “overlooking” their repeated misdemeanours. Irrespective of the partisan administration in Washington, the US actions and reactions are following a set pattern, and Delhi is stitching its own alliances to counter the unholy nexus among the triad of Turkey, China and Pakistan.