Time is running out for the Congress in Punjab

Time is running out for the Congress in Punjab 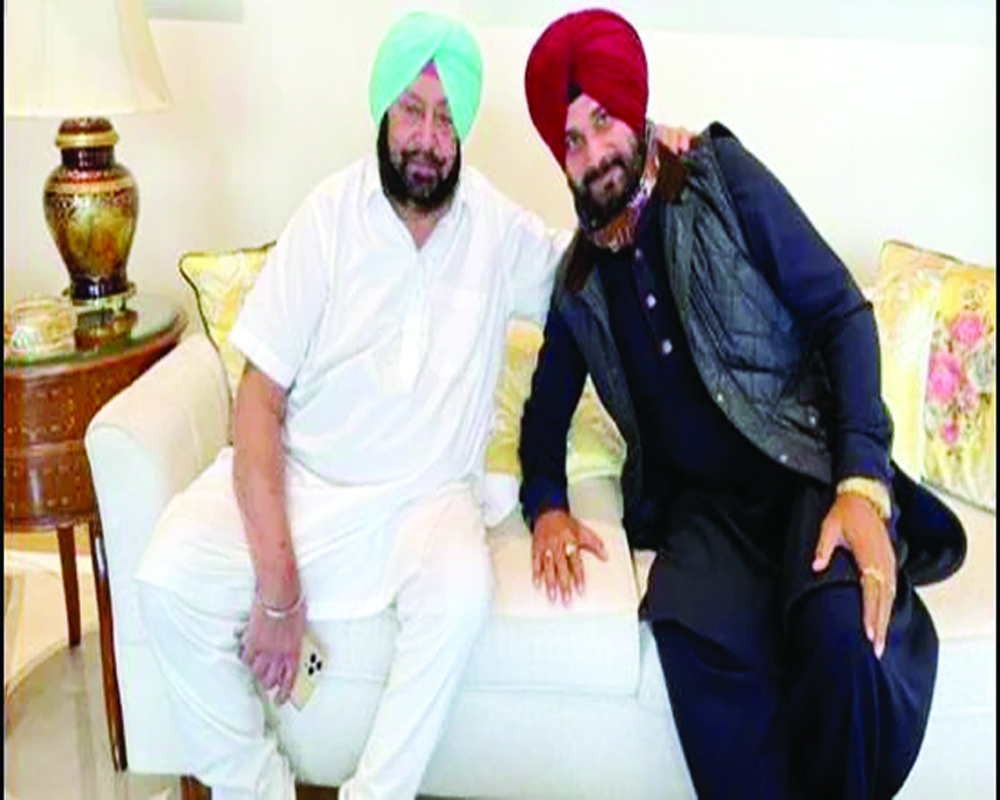 Captain Amarinder Singh, the Chief Minister, hardly has any option but to take the dissidents along and run a united ship

The Congress leadership is engaged in damage control in Punjab with the political crisis threatening to go out of control.  The high command is looking for a formula to calm down the tempers of the dissidents against Chief Minister Captain Amarinder Singh. The Assembly elections are scheduled early next year. Punjab is one of the few Congress-ruled states and it would like to retain it. It is a sensitive border state which has seen violence in the past.

While the chief minister is considered close to Congress president Sonia Gandhi, his baiters draw their strength from Rahul Gandhi and Priyanka Gandhi. The brother and sister see main critic and former cricketer Navjot Singh Sidhu as a leader with appeal among Punjab's youth. However, after all the drama played out in Delhi last week when 25 legislators and other senior leaders as also the Chief Minister met a three-member panel led by leader of opposition in Rajya Sabha Mallikarjun Kharge, all we know is that the committee, set up by Sonia, after talking to the dissidents, is against a leadership change. But at the same time it wants the dissidents to be accommodated in the party and the government in a reshuffle. Though the Captain sought votes in 2017 on his plea for a last chance to rule, he has now changed his stand and will seek another term.

Congress is having a leadership crisis even at the national level. Rahul Gandhi, though not occupying any position, is said to be taking most of the decisions. Even in the case of Punjab, both Rahul Gandhi and Priyanka Gandhi talked to the Captain in a virtual meeting last week.

This is not the first time the chief minister has faced dissension in party ranks. With the support of Sonia Gandhi, the Captain survived a rebellion in 2005 but a similar crisis has engulfed him in his second term, with cabinet members and party legislators openly defying his writ.

Sidhu the cricketer-turned-politician is leading the attack.  The ambitious Sidhu may not command much influence over Congress MLAs or the cadre, but his rebellion against the Captain has galvanised the dissidents.Though  the dissidents have complained against him, they do not agree on his replacement. The recent outburst of animosity came as the Punjab and Haryana High Court quashed an SIT report into the Kotkapura firing incident of 2015. Sidhu accused the Chief Minister of evading responsibility. The dissidents also claim that the chief minister is soft with the Badals. The drug menace which was one of the election issues in 2017 also needs to be addressed more robustly.

Sidhu started dreaming of becoming chief minister after he gained access to Priyanka Gandhi and Rahul Gandhi. Senior leaders who are in the queue to succeed the Captain are dismayed with this. Sidhu also wants to become the PCC president though he does not have the capacity to take everyone along.

Among the solutions being considered by Congress high command are a cabinet reshuffle, representation to more castes, and a bureaucratic reshuffle to give a free hand to elected representatives. There is a proposal to form a new campaign committee. The dissidents will sought to be accommodated with these changes.

Factionalism is not new to the Congress party. But a weak leadership cannot continue to treat the states or encourage dissidents as it did earlier because the party needs unity.There are not many options left for the leadership.

The first thing is to broker peace between the Chief Minister and the dissidents. Second, the Chief Minister must be persuaded to take everyone along.Third, to implement all campaign promises.Four, concentrate on covid relief works as unless the people perceive the government is doing a good job there will be trouble ahead. The fifth is to strengthen the Chief Minister when there is no alternative.The sixth is to activate the party workers to make them poll-ready.

The Punjab assembly election will be one of the hottest political battles in early February, 2022. The other parties like the Akali Dal and the BJP too are trying to set their house in order. While the Akali Dal has severed its connection with its long-time ally the BJP last year on the farm bills issue, the two parties have declared that they would go it alone in the upcoming polls. Therefore, Punjab is likely to face a multi-cornered fight.  The BJP's expansion plans are aggressive.  The Captain and a united party seem to be the best bet for Congress.

(The author is a senior journalist. The views expressed are personal.)