Time to settle Assam-Mizoram border once for all

Time to settle Assam-Mizoram border once for all 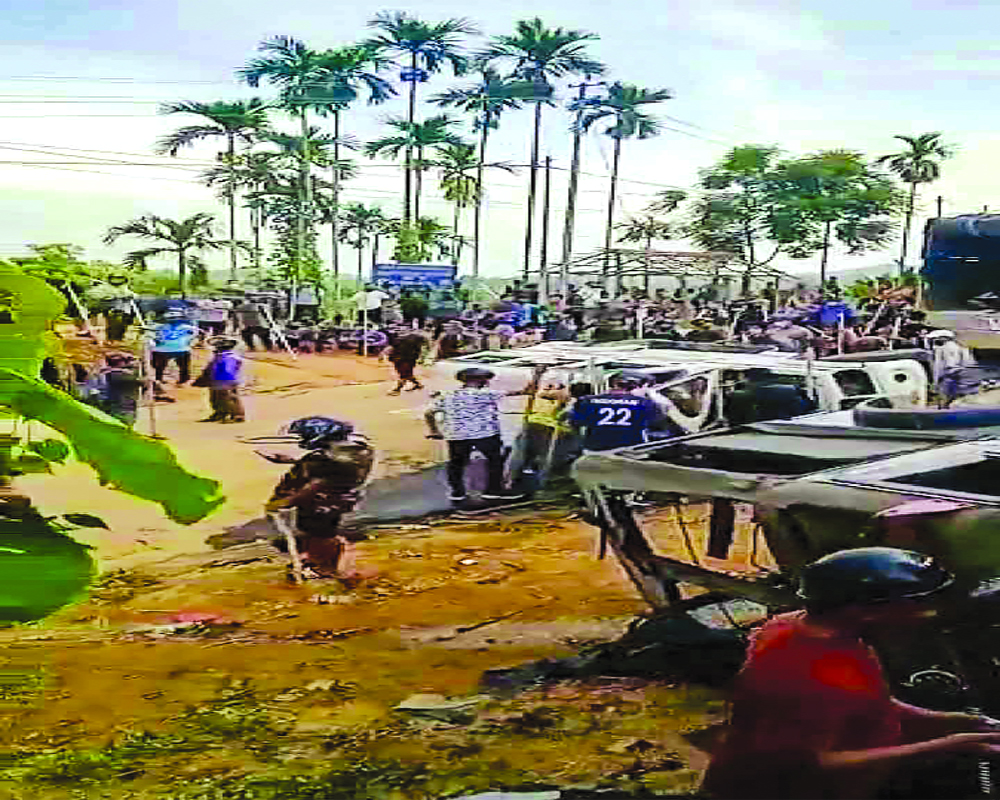 The border conflict between Assam and Mizoram is the legacy of the historical blunder. Only bureaucratic exercises and simply putting the issue on the back burner might escalate the face-off into a larger ethnic crisis in the near future

The festering border dispute between Assam and Mizoram, which a few days ago took an ugly turn, has a deep colonial hangover. Most of these border areas (land and forest-related conflicts in the North-East) were not precisely demarcated during the British colonial days. And once the imperial administrators had left, the very idea of India had to survive with multitude of problems, including the internal fiascos over border lands.

The current violent spat between Assam and Mizoram took place on July 26. On that very day, a team of around 200 Assam Police personnel led by senior civil and police officers went to Variengte (Mizoram) to resolve the matter. However, Mizoram claims that the Assam Police forced their way by overrunning CRPF and Mizo Police posts. Whereas its counterpart alleges that Mizoram was trying to build a temporary road from another point in Variengte to Assam’s territory in Lailapur that falls within the Inner Line Reserve Forest.

The Assam team was surrounded and attacked by a mob of miscreants supported by the Mizoram Police as per the statement of the Assam Government. Also, the Mizoram side is accusing the Assam police of firing. The bottom line is that both the parties are citing transgressions of their boundaries and violent attacks from each other. The difficulty of maintaining such borders is that they are naturally occurring regions having rivers, hills, forests and valleys. As there is no clear demarcation, people living along the borderline naturally cross over to the other side. Last year also skirmishes took place between the two States amid pandemic. The Mizo civil society groups described the incident as a fight between illegal Bangladeshi settlers on the border, but not as Assam vs Mizoram. But then it’s a porous border and tension continues.

The States of Mizoram, Meghalaya and Nagaland were once an integral part of the hilly tracts of Assam. When the new States were carved out of Assam, most of the boundaries between these States were not settled. Hence the decades-long grievances of Hill States and Assam have remained unsolved. Delhi had other priorities then, so the issues related to North-East had hardly received any attention from the Central leadership. Sadly, this long historical neglect continued since the days of the first Prime Minister of India, Jawaharlal Nehru, till date.

Both pragmatists and theoreticians devising policies at the Centre treated the problems of North-East simply as “law and order” issue. And this continued for decades irrespective of whether there is a Congress, BJP or coalition Government at the Centre. However, things have been changing for the last two decades. The deep-seated estrangement that existed between North-East and the Centre has been gradually declining.

The three districts of Assam’s Barak Valley — Cachar, Karimganj and Hailakandi — share a border of nearly 164 km with Mizoram’s Aizawl, Kolasib and Mamit. And the current border clash followed after a territorial dispute in this vast area initially in August 2020.

But a strong intervention from the Centre and an understanding between the two State Governments, the inter-State bickering died down for about only five months. It once again started in February this year.

After the terrible showdown between the two sides, the Union Government has to finally intervene to bring peace back in the tense region. The top bureaucrats and police officers of both the State Governments after attending a discussion mediated by the Union Home Secretary agreed to the decision to deploy a neutral Central force in the disturbed area.

Now, the Central Armed Police Force (CAPF) will be on duty at the inter-State border of Assam and Mizoram along the National Highway 306 (earlier known as NH-54). And the neutral force will be commanded by a senior officer of the CAPF. It is the responsibility of both the State administrations to facilitate the functioning of the force so as to maintain law and order and prevent further loss of life at the contested border site. Another significant part of the talk is that both Dispur and Aizawl have agreed to withdraw their respective police forces from this part of the border area. It is hoped that the immediate intervention of the Union Government and cooperation from the two neighbouring States will help ease out disturbance particularly between people living on both sides of the territory.

Amid historic demarcations of borders and continued explosion of population, followed by massive flow of migrants, the other States of North-East are gradually losing the oft-required peace with Assam. Unlike other parts of India, the eight States of North-East are a unique mosaic of diverse ethnic groups wherein caste-class identities do not matter much. Further, theories of political modernisation have simply regarded the claims of these ethnic groups as no other than sources of tension. And at times, many theorists have tended to treat their demands and priorities as an impediment to the larger process of national integration and also a threat to development. The Centre’s dilemma with these theories is that it takes a traditional liberal assumption that ethnic demands are indications of regression and underdevelopment.

However, contrary to the conventional liberal perspective, ethnicity and development go together in the North-East. However, ethnic aggressions and unquiet claims need to be addressed at the right moment.

It is a golden opportunity not only for Assam and Mizoram, but also for Manipur, Meghalaya, Nagaland, Arunachal and Tripura to settle all their border disputes once and for all. Because all these States are currently either having a BJP or BJP-led Government or else the BJP is partner in the North-East Democratic Alliance (NEDA). The NEDA was formed as a new political front on May 24, 2016, by the BJP to unite all the non-Congress parties in the region and to protect the interests of its people. Its slogan is very unique: “Eight States, One Force”. So now all the “Eight Sisters” need to sit back and must act as one single force to settle all their disputes.

Those who are crying foul over the border crisis along the NH-306 must remember that it is an old wound. It’s a colonial-era dispute. In the year 1875, Lushai Hills were demarcated from the plains of Cachar of Assam by the Bengal Eastern Frontier Regulation Act 1873. This boundary line and separation was made by the British colonial administration in close consultation with the tribal chiefs of the Mizo community. Also this line became the yardstick for the Inner Line Reserve Forest between the Lushai Hills and Cachar then. Again in 1933, another demarcation between the Lushai Hills and Manipur was done at the trijunction of Manipur, Cachar and Lushai Hills without consulting the Mizo tribal leaders. It is believed that the second demarcation has been the point of major contention between Assam and Mizoram. General opinion in Mizoram is that with this new border line of 1933, the Lushai Hills had to lose some of their indigenous lands. And today, only acceptable boundary for the Mizos is no other than the Inner Line created in 1875.

When Mizoram was carved out of Assam’s Lushai Hills District and made a Union Territory in 1972, its constitutional boundaries were defined. After a gap of 14 years, the Union Territory of Mizoram was elevated to the status of a State by the State of Mizoram Act 1986. In fact, in 1986, Parliament of India adopted the 53rd Amendment Act of the Indian Constitution. And finally, this Act only made way for the creation of the new State of Mizoram on February 20, 1987 (became the 23rd State of India).

For all pragmatic purposes, the constitutional boundaries must be maintained between the two States. And further, if any change is to be made on the status quo, our Constitution has empowered only Parliament to do so.

At this point, the Union Government must work out a permanent solution to this boundary dispute, instead of simply bringing both the warring States to the negotiation table. This kind of regular bureaucratic exercise and simply putting the issue on the back burner might escalate the face-off into a larger ethnic crisis in the near future.

Hope Prime Minister Narendra Modi will display his usual activism and resolve this issue forever. Neglecting such grievances for long may help crystallising ethnic feuds, leading to insurgency and terrorism as the region has a number of active unlawful groups.