To command respect in the simplest way

To command respect in the simplest way 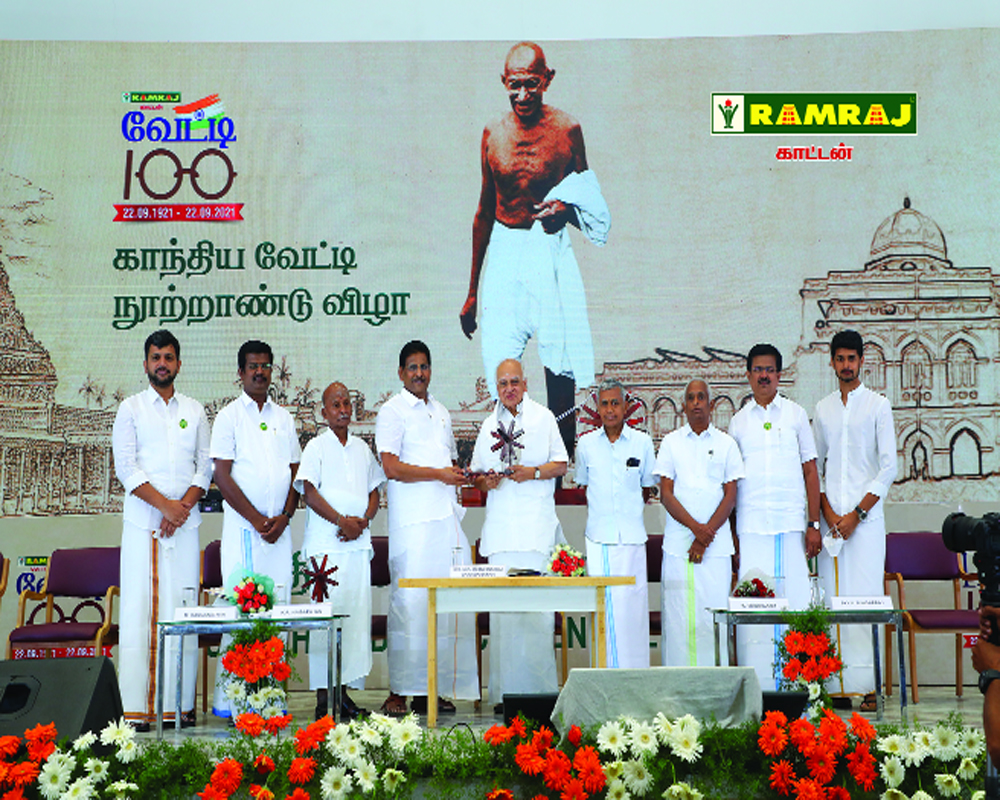 While the whole nation was busy observing Gandhi Jayanti on October 2 (the day Mahatma Gandhi was born) and preparations are in full swing to celebrate his 155th anniversary that falls in 2024 with grandiose plans, an event was held in Tamil Nadu’s Coimbatore sans any fanfare by an industrialist that went unnoticed.

It was the centenary of the Mahatma switching over his attire from the traditional Gujarati kurta and pyjama to the poor man’s dress - the loin cloth (dhoti). The Father of the Nation who was on an all-India tour left his traditional costume on September 21, 1921, at Madurai at the end of a cross country tour. He was moved over by the poor farmers across the sub-continent struggling to cover themselves with a piece of cloth. On that eventful day at Madurai, the temple city of Tamil Nadu, Gandhiji gave up wearing the customary costume and underwent an image makeover to identify himself with the “Daridra Narayana”. He also made it a habit to weave the loin cloth for himself with the help of a charkha (spinning wheel).

In independent India, after the Gandhi era, the ‘dhoti’ lost its dignity somewhere along the line as the new generation preferred fashionable trousers, jeans and bermudas, though people in Tamil Nadu and Kerala continued with the dhoti made of cheap cotton.

It was Tirupur based KR Nagarajan, a matriculate, who took it as a mission to make people wear dhotis. Nagarajan was a victim of the prejudiced mindset of the glitterati towards the traditional attire as he himself was turned away from a five-star hotel for daring to wear a dhoti instead of the prescribed dress code- three-piece suit! He launched Ramraj Cotton, the company that is credited with manufacturing India’s first branded dhoti. Even business rivals agree that there was no looking back either for Nagarajan or the dhoti. The year 2015 saw the then Chief Minister J Jayalalithaa issuing an order making it a criminal offence to prevent persons wearing dhoti entering public or private places including Government establishments.

Nagarajan’s brand name Ramraj itself is a tribute to the Father of the Nation who had dreamt of establishing ‘Ram Raj’. To mark the centenary of the Mahatma’s rebooting of his image, Nagarajan inaugurated Dhoti 100, as a tribute to the country’s millions of poor people and weavers who make dhotis.

Nagarajan, who is always seen in his dhoti and shirt, is of the view that the teachings of Mahatma Gandhi would get global recognition when people begin respecting dhoti. “The dhoti clad man should get the same respect and recognition which people in western outfits get. The Government should seriously think of declaring dhoti as India’s national attire,” said Nagarajan.

Hundreds of weavers drawn out from western Tamil Nadu were honoured as part of the Dhoti 100 event while dancers from Chennai’s Kalakshetra performed a dance “Gandhiyin Vazhiyil Ramraj” (Tamil for Ramraj in the path of Gandhi).

Recounting the history of his unit, Nagarajan said it was the hardship faced by weavers in the region that made him set up a weaving unit. “They were earning Rs2 per day as wages for weaving and for that too, they had to walk more than 10 kms from their villages to Tirupur town. It was to help them earn more that I gave up the job of a clerk in the office of a Sait and launched the weaving cooperative. I am the first employee of this company,” said Nagarajan.

R Chandran, a Tirupur businessman, said the Ramraj Mills played a significant role in turning the fortunes of more than 50,000 weavers. “Nagarajan has every right to observe the centennial celebration of Mahatma Gandhi’s decision to change over to dhoti. He is the true Gandhi of modern times,” said Chandran.

Nagarajan, whose unit has never seen any kind of labour unrest, is content with the achievement made by him. “We have transformed the attire of the Mahatma into a national identity. If the number of youngsters wearing dhoti is any indication, the day is not far off when people all over the country would prefer dhoti and shirts as their attire,” said Nagarajan.

Clad in white dhoti and shirt all the time, Nagarajan practices what he preaches. The day in the weaving units and the corporate office begins with prayers and promises...promises to make the world a better place to live. There is no unhappiness around as weavers are paid suitably and taken care of. Nagarajan himself is content with the size of the unit he owns. “Let others launch such units so that more and more weavers get benefitted,” he said even as he honoured the weavers by offering them dhoti and miniature charkhas.

Nagarajan’s could be the rare example of the building block of village republics visualised by the Mahatma. “Self-reliant villages form a sound basis for a just, equitable and non-violent order,” the Mahatma had said, setting the tone for a new economic order for the world free of any “isms”. It is valid even in the era of satellite phones and genetically modified foods.

(The writer is a Special Correspondent with The Pioneer. The views expressed are personal.)