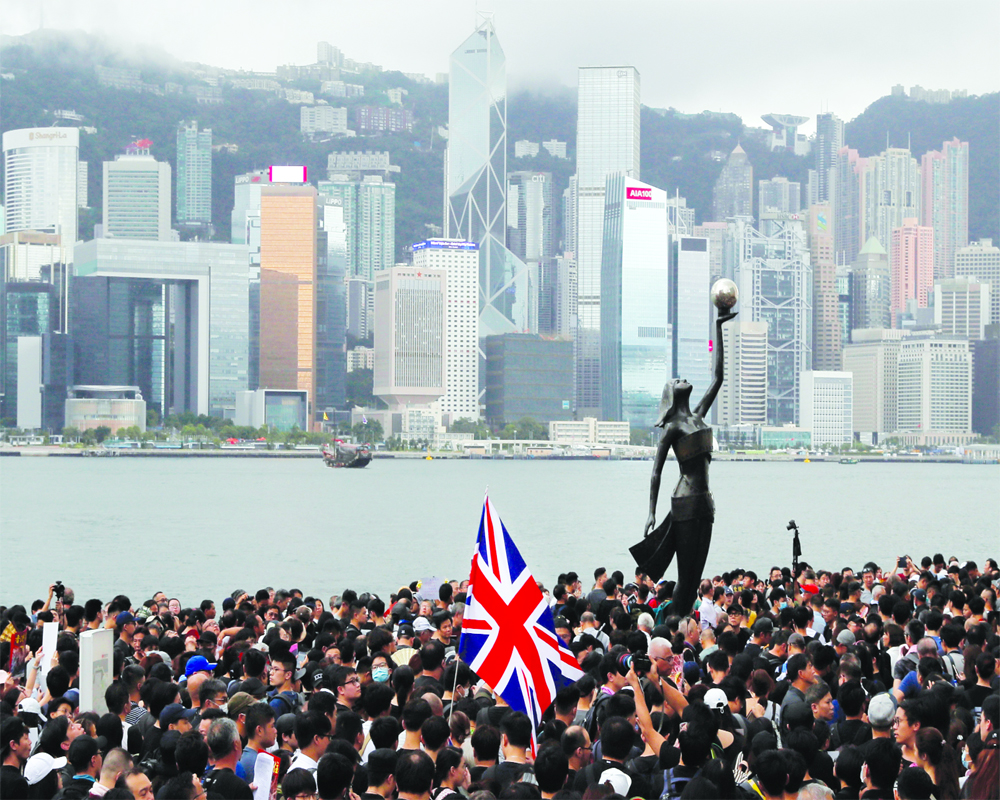 Once known as world-class trade centre, Hong Kong is currently encountering an ever-aggressive mainland China. It is gradually slipping into an abyss. The locals are trying to safeguard their basic freedom against the backdrop of the imposition of the draconian National Security Law in June last year. Since then, millions are protesting on the road to register their utmost displeasure against the sudden curtailment of their rights and freedom.

In the wake of massive overhauling of the legal administration of Hong Kong, the UK, the former colonial master of the city, proposed a citizenship offer to the islanders in the middle of last year. Indeed, the offer is not only crucial for those suffering in Hong Kong, but it also reflects a strong concern on what is unfolding in the island territory.

The decision has also demonstrated the legacy of British control for nearly a century over this part of China. When Hong Kong was handed over to China by then Prime Minister Margaret Thatcher to Deng Xiaoping, President of China then, there was a call for issuing this kind of unique citizenship offer from Britain. However, such measures were not considered by the Government of the UK during that time in July 1997.

What has provoked the current Boris Johnson regime to make the citizenship offer to millions of Hongkongers? On November 11, 2020, the Chinese parliament decided that any Hong Kong legislator who promote or support Hong Kong independence, refuse to recognise China’s sovereignty over Hong Kong, seek foreign countries to interfere in the affairs of Hong Kong, or endanger the national security of Hong Kong will be held guilty of the breach of the parliamentary oath and will be disqualified from the membership of the Hong Kong Legislative Council with immediate effect.

The decision of the National People’s Congress (NPC) eventually disqualified four members of the Hong Kong Legislative Council. Back home in London, it was advocated that this sudden move of Beijing was a ploy to gag all voices critical of the policies adopted by the mainland authorities over the years.

Truly speaking, this new rule set by the bosses in China has become another tool to suppress the concerns of the locals in Hong Kong. Today, the British Government feels that this decision of the NPC are in contravention of the legally binding historic Sino-British Declaration signed on December 19, 1984 in Beijing. The Declaration which came into effect on May 27, 1985 clearly outlines the administrative arrangement of Hong Kong after the withdrawal of the UK on July 1, 1997. What has been highlighted by the Westminster today is that China has violated its earlier commitment of providing considerable autonomy to this former colonial territory.

In fact, this high degree of autonomy and freedom of speech for Hong Kong was very much guaranteed under the Paragraph 3 and Annex I of the joint Declaration. The British Government noted that this is for the third time the Chinese Government has breached the legally binding Declaration since the handover of the territory in 1997.

The first such instance took place in 2016, the second, when Beijing imposed the National Security Law in June 2020 and third in November 2020. This clearly indicates what Beijing is aiming to pursue in Hong Kong.

The root of the current crisis spearheaded by the Umbrella Movement and various democratic protests lie in the blatant violation of the Basic Law or Mini Constitution under which the NPC had agreed to respect the autonomy of the territory. In fact, since the formal transfer of the territory, it has been administered as the Hong Kong Special Administrative Region (HKSAR).

Further, the mainland authorities have also committed to maintain a unique administrative system called “One Country, Two Systems”, under which Beijing will follow the Communist pattern and this former colony will carry on with the capitalist system of economy and polity. And this autonomy, wherein basic rights and freedoms were to be enjoyed by the Hongkongers will be continued for another fifty years i.e. till 2047. Clearly, many locals were happy that they will be able to have a free life even under the Communist China and will not be affected by the opaque and authoritarian regime of Beijing.

The decision to offer citizenship to millions of Hongkongers is indeed affected by choices made some decades ago. It was a commitment that Britain shared with China to maintain the status quo in Hong Kong until 2047. But then China has violated the fundamental rights of freedom of the islanders much before the due date. Apparently, all these started taking place with the coming of Xi Jinping to power in the year 2012. And now with his life-time presidency, the international community could hardly expect any positive development in Hong Kong.

After removing two-term limits for the office of the President, Xi has become the most powerful head of the state after Chairman Mao Zedong. His expansionist trend, in fact, started with the Belt and Road Initiative (BRI) through which he aims to extend China’s economic prowess much beyond Asia. The aggression of the Chinese state has increased manifold. And one of the strongest manifestations of it is Hong Kong.

With the coming of the citizenship offer from Britain, the counter reactions are pouring in from the mainland and the pro-establishment figures in Hong Kong. Regina Ip, a member of the Executive Council and Legislative Council of Hong Kong, has already issued a call for issuing curbs on dual citizenship in the island. She has argued that those who obtain foreign nationality should be stripped of the right of abode. Even she is advocating that Beijing should put an end to its special treatment of Hongkongers and impose its own nationality law on the city. The irony is that though she is trying to make a strong case of China’s full intervention in Hong Kong, the lawmaker is not receiving adequate support from even the pro-Beijing bloc in the city Council.

Providing sanctuary to some millions of Hongkongers will not solve the crisis in the city. But certainly, this step will offer an immediate relief to some of the troubled citizens of the territory. Even the MPs in the British House of Commons openly approved the citizenship offer to Hongkongers. How serious London is about the current situation in its former colony is very much evident the way various government dignitaries are responding to it. Particularly, Dominic Raab, the Foreign Secretary, expressed his anguished by saying, “This is a special, bespoke, set of arrangements developed for the unique circumstances we face and in light of our historic commitment to the people of Hong Kong.”

This is how he says China could be cohesively forced to allow the British Overseas Nationals to come over to the UK. In fact, he termed China’s current steps in Hong Kong as a “flagrant assault” on the freedom of speech and the right of peaceful assembly across the island. The good part of the concerns raised over Hong Kong in the UK is that these moves by the Johnson Government almost enjoy support from the Labour’s side as well. The Labour Party said it welcomed the Government’s action but said there must be no discrimination on those allowed into the UK on the basis of income or other factors.

The Labour Party’s shadow Foreign Secretary Lisa Nandy urged the Government to work with its international partners through the UN to force an enquiry into police brutality in Hong Kong and also called for the UK to re-examine its commercial relations with China. This will be an added support for Johnson to act swiftly and handle Chinese actions in Hong Kong effectively.

How is the Xi regime reacting to this citizenship offer by the UK? Precisely, after the British citizenship offer, the Sino-British relationship has come to almost a deadlock. This month the Chinese Government announced that it will no longer recognise British National (Overseas) passport as a valid travel document or as a form of identification.

This declaration from Beijing has come days before a new visa route for Hong Kong residents is to be opened in the UK. While reacting to the announcement coming from authoritarian Xi regime, the Foreign, Commonwealth and Development Office (FCDO) in London said it was disappointed but not surprised by the decision. But for Beijing, London’s Hong Kong interventions simply reflect its age-old colonial mentality only.

For Johnson, on one hand, his Government has just moved out of the EU and stalled further immigration from other parts of Europe to the UK. And now, the same Government has decided to welcome more than three million Hongkongers to the same land.

However, as the UK is out of the EU stranglehold, it is a testament of the principle that the country is now free to decide who comes in and who goes out. Let’s wait and watch how this new saga of migration from Hong Kong to the UK unfolds.