Whose Padma is it, anyway?

Whose Padma is it, anyway? 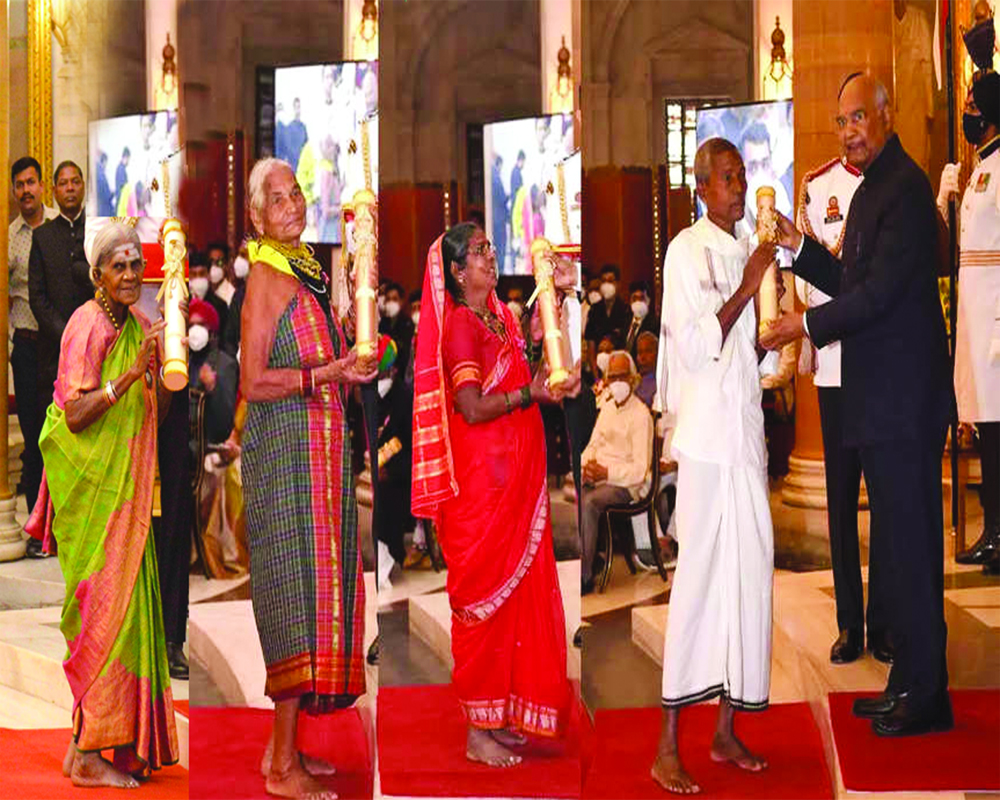 Consumed by the craving for recognition, people are said to have bid crores to secure a Padma award. But the process has become transparent since 2015

As the COVID-19 pandemic subsides, a new type of fever has gripped Kerala and Tamil Nadu. It is the Padma fever! The craving for civilian honours — the Padma Shri, Padma Bhushan and Padma Vibhushan, which would be declared on the eve of the Republic Day — knows no bounds in these States. It is only in Kerala and Tamil Nadu that one comes across people with a passion for honorific titles, such as a Doctor or Padma winner. Though former Chief Minister, late M Karunanidhi, was a school dropout, he wanted people to address him as ‘Dr Kalaignar’.

The fancy for recognition plays a major role in the passion for these awards. Mostly the nouveau riche chase these awards, which do not carry any cash prize or material benefits. The Padma awardees get importance in warrant of protocols in public functions.

The Padma awards seek to recognise achievements in all fields where an element of public service is involved. “The recommendations for the Bharat Ratna are made by the Prime Minister to the President of India. No formal recommendations for the Bharat Ratna are necessary. The Padma Awards are conferred on the recommendations made by the Padma Awards Committee, which is constituted by the Prime Minister every year. The nomination process is open to the public. Even self-nomination can be made,” states the Government of India notification in this regard.

Since 2015, the Union Government has changed the rules/procedures for selecting the awardees. Earlier, the State Governments were asked to send a list of names, from which the Centre picked the persons for the Padma honours. But this was not at all a transparent process. A Malayalam feature film, Pranchiyettan And The Saint (2010), directed by Ranjit, a CPI(M) fellow traveller, portrayed vividly the nuances of getting a Padma award.

Pranchiyettan, a self-made but uneducated entrepreneur in Kerala’s Thrissur city, and his efforts to get a Padma award formed the plot of the hilarious film. Pranchiyettan hands over Rs 1.5 crore to a conman who promises him a Padma Shri. Needless to say that Pranchiyettan did not make it to the list and the conman did a vanishing act with the money. It is said that the story was based on a real-life incident in which an expatriate from Thrissur paid Rs 4.5 crore to get a Padma award.

The Padma honours come with a lot of dos and don’ts. The awardees are not allowed to display the titles on their letter pads or visiting cards. There is no cash incentive of any kind with the Padmas. The awardees do not stand any chance in getting a railway reservation ticket confirmed or preference of any kind in public dealings.

The only honour awaiting the awardees comes after they pass away. The State Government is bound to give them full honours when the last rites of the awardees are performed. The policemen would offer a gun salute as the band plays The Last Post. While the award winner’s body is consumed by fire or lowered in the soil, the police would fire a volley of shots  which officially marks the conclusion of the “eventful” lives of these “great sons and daughters”.

Bobby Chemmanur, a business baron in Kerala’s Thrissur, was heard telling a television interviewer that he was offered the Padma Shri by “persons in high places”. He said: “But when I was asked to pay Rs 50 lakh to meet the initial expenses, I said no. I am happy with the kind of recognition and adulation people give me.” He took people by surprise when he brought to Thrissur the iconic Argentinian footballer Diego Maradona.

Since 2015, the selection of Padma awardees is based on the votes/nominations they receive on the Government of India website. Any member of the public can nominate the person of their choice for the civilian honours and there is no need to wait for the ‘kindness’ of the State Government. Those bagging the maximum number of nominations stand the chance to win the Padma awards. It is not known whether the process is foolproof or not. But there has been a noteworthy change since 2016. A female tribal physician, another female Kalaripayattu exponent, a folklore artist, a visually impaired primary school teacher and a Harijan Gandhian (who were all unsung, unheard of) have made it to the list of the Padma awardees.

Interestingly, there is a retired top bureaucrat who played a major role for years in handpicking the awardees. Pejawar Murari, former secretary to the President who was instrumental in organising the swearing-in ceremonies of three Prime Ministers (VP Singh, Chandra Shekhar and PV Narasimha Rao) and who was the last word in selecting the Padma awardees, stays in his Chennai home surrounded by his favourite books and taken care of by his wife, Sita. In his eighties, Murari still retains the old charm as well as the ‘stiff upper lip’. He bursts out laughing when asked: “Sir, don’t you aspire for a Padma honour?” That is P Murari…He doesn’t care a hoot for honours of any kind.

(The writer is a senior journalist working as a Special Correspondent with The Pioneer. The views expressed are personal.)