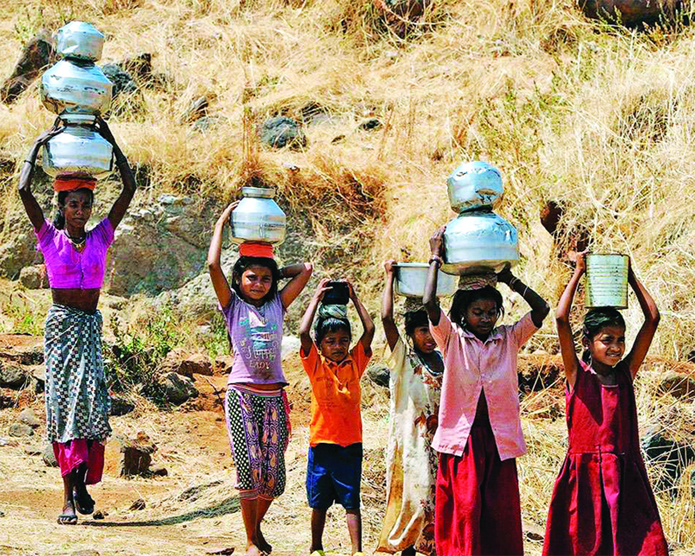 To encourage female participation, the Govt has made it obligatory for each water committee to have 50 per cent women members

Globally, women are increasingly being recognised for their important role in the management of water resources. Every International Women’s Day, there is much noise about the inclusion of women in water programmes and the heartbreaking statistics regarding drudgery, school absenteeism and so on. Many platitudes are offered but before the end of March, everything fizzles out, until the next year. The Global Gender Gap Index 2020 ranked India at 112 out of 153 countries, with an overall unemployment rate of 9.1 per cent. Urban unemployment was at 8.8 per cent and unemployment among women was 18 per cent.

Any water supply hurdles lead to a substantial economic and social impact that disproportionately affects females. For instance, the time and effort spent in water collection hits women’s income-generation ability, impacts attendance of girls in schools and interferes with the time required to tend to the sick at home. Therefore, women quickly see the advantages of investing in water treatment infrastructure and often play a crucial role in convincing the community to undertake its construction, operation, maintenance and management.

For decades, studies have examined the role of women in the water sector. They have found substantial improvements in the governance, transparency and sustainability of water supplies when men and women are involved in equal measure than when women are involved only marginally or not at all. Water projects that involve women in design planning and operations are more sustainable than those that do not. Yet, women make up less than 17 per cent of the water, sanitation and hygiene labour force and only a fraction of policymakers, regulators, management and technical experts.

The participation of women in the water sector is often assumed to be a rural issue. Women are significantly missing in utilities which can draw benefits such as lower levels of non-revenue water losses, improved cash flow and more resources for investment in infrastructure and increasing service quality. This will lead to the engagement of fewer Government subsidies which can be utilised for other essential services. The key to driving user-centred design improvements and reforms across the urban water sector in developing countries is to create conditions that can attract, retain, and promote women in roles in which they can shape the design, construction and rehabilitation of new and existing water supply systems.

India has set an ambitious goal, as part of the Jal Jeevan Mission (Rural) to provide functional household tap connections, piped water services to its entire population at an outlay of $90 billion by 2025. To bridge the gender gap, the Government has tied up with the Pradhan Mantri Kaushal Vikas Kendra to train women in masonry and impart them skills to become electrical and motor mechanics. To encourage women’s participation, the Government has made it obligatory for each paani samiti (water committee) constituted for water supply management to have 50 per cent women members. Through the situation is changing, the Government should put greater emphasis on building Self-Help Groups into a competitive alternative to private operators. Providing safe drinking water to 1.35 billion people in urban and rural India is a huge challenge. The emergence of Covid-19 has further accentuated the need for clean water. Prioritising women’s engagement to regulate water programmes will ensure effective usage of water resources.

In India, where women have been trained and licenced as hand pump mechanics, customers rate female mechanics as more accessible and responsive than their male counterparts. As a result, in areas served by women mechanics, there is more preventative maintenance and fewer breakdowns. Many of these women understand that a broken hand pump results in girls/women having to travel greater distances to collect water, losing productive time and increasing risks to their safety.

Initially, society found it futile to train women, but with repeated success, the female workforce not only became active participants but also modified the entire management of community water systems. The work-life balance for women has been significantly disturbed in these challenging times.

However, it has taught women to multitask and manage the household while diligently working from home. With a male-dominated Indian economic system, there is an urgent need to rectify the gender imbalance by driving awareness, through knowledge-sharing and developing a sense of decision-making and entrepreneurship among women. With successful revenue streams driven by women-led businesses, the Government has also started focusing on promoting women entrepreneurship covering rural, semi and urban geographies.

To bring down the patriarchal barriers and make significant progress towards achieving Sustainable Development Goal 6, it is essential to create a successful Private-Public-Partnership (PPP) model for upskilling and teaching women groups especially regarding post-work gaps, mentoring and feedback process. Through the bottom-up approach of the PPP model, economic opportunities need to be created to promote the well-being of women.

Sakchi market to be redeveloped on lines of Chandni Chowk

Four feared trapped in mine cave-in