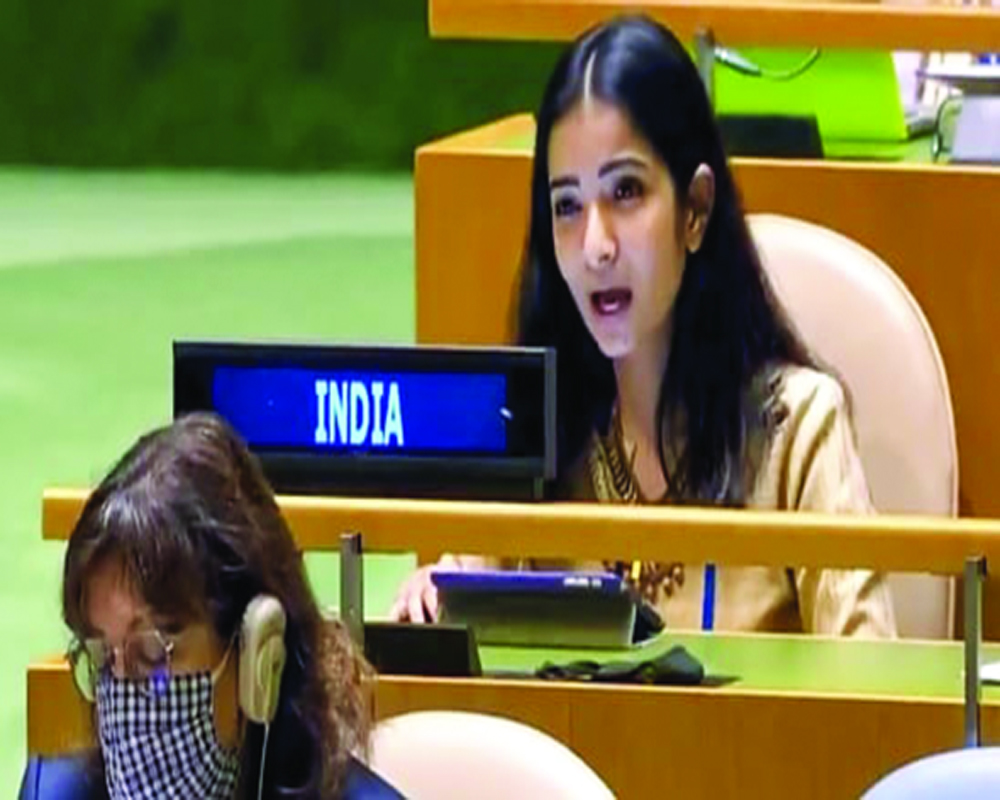 Pakistan and India sparred at the United Nations General Assembly in New York with terror, Jammu & Kashmir, and human rights figuring in the centre of an acerbic blame game.

While Pakistan called the Modi Government a “fascist” and responsible for unleashing Islamophobia in the region, India said its neighbour is an “arsonist” disguising itself as a “firefighter,” and nurtures terrorists in its backyard.

Exercising its right of reply to Khan’s statements at the United Nations session, India said Pakistan has an established history and policy of harbouring, aiding and actively supporting terrorists.

The entire world has suffered because Pakistan nurtures terrorists in its backyard, she said.

“Regrettably, this is not the first time the leader of Pakistan has misused platforms provided by the UN to propagate false and malicious propaganda against my country, and seeking in vain to divert the world’s attention from the sad state of his country where terrorists enjoy free pass while the lives of ordinary people, especially those belonging to the minority communities, are turned upside down,” she added.

This strong retort came following Prime Minister Imran Khan’s “virtual” address, where he had raised the issue of abrogation of Article 370 in 2019 giving special status to Jammu & Kashmir as well as the death of separatist leader Syed Ali Shah Geelani.

Labelling the Modi Government as fascist, Khan also said, “It is unfortunate, very unfortunate, that the world’s approach to violations of human rights lacks even-handedness, and even is selective. Geopolitical considerations, or corporate interests, commercial interests often compel major powers to overlook the transgressions of their affiliated countries.”

As regards Kashmir, the Pakistani Prime Minister said, “New Delhi has also embarked on what it ominously calls the ‘final solution’ for the Jammu and Kashmir dispute.” He also alleged “gross and systematic violations of human rights” by Indian forces.

He specifically mentioned the “forcible snatching of the mortal remains of the great Kashmiri leader,” Syed Ali Geelani, who died earlier this month at 91. Khan called upon the General Assembly to demand Geelani’s proper burial and rites.  He also said Pakistan desires peace, but it is India’s responsibility to meaningfully engage.

Imran said that post 9-11 there has been a design by some right-wing fascist forces to unleash hate campaign against Muslim all over the world. He especially named the RSS and the BJP among such forces.

The Pakistan PM urged the UN Secretary-General to convene a global dialogue on countering the “rise of Islamophobia” to save the world from another kind of terrorism in the name of the rising phenomenon.

Accusing the BJP-led Indian Government of toeing the “worst and most pervasive” form of Islamophobia by unleashing a reign of fear and violence against India’s 200 million-strong Muslim community, Imran called for a “free and fair” plebiscite in disputed Jammu and Kashmir in accordance with the UN Security Council resolutions to resolve the long-running dispute.

He put the responsibility for the resumption of long-stalled peace talks between the two neighbours on India.

“The onus remains on India to create a conducive environment for meaningful and result-oriented engagement with Pakistanâ€¦. “ he said.

Brushing aside these accusations, First Secretary Sneha Dubey said in her speech at the UNGA, Pakistan holds an ignoble record of hosting the largest number of terrorists proscribed by the United Nations.

She also reiterated that the entire Union Territories of Jammu & Kashmir and Ladakh “were, are and will always be an integral and inalienable part of India”.

“Member States are aware that Pakistan has an established history and policy of harbouring, aiding and actively supporting terrorists. This is a country that has been globally recognised as one openly supporting, training, financing and arming terrorists as a matter of State policy. It holds the ignoble record of hosting the largest number of terrorists proscribed by the UN Security Council,” the diplomat said.

Underlining the democratic traditions of India, she said unlike Pakistan, India is a country with free media and an independent judiciary that keeps a watch and protects our Constitution.

“Pluralism is a concept which is very difficult to understand for Pakistan which constitutionally prohibits its minorities from aspiring for high offices of the State. The least they could do is introspect before exposing themselves to ridicule on the world stage,” she added.

India also strongly reiterated that the entire Union Territories of Jammu and Kashmir and Ladakh “were, are and will always be an integral and inalienable part of India”. “This includes the areas that are under the illegal occupation of Pakistan. We call upon Pakistan to immediately vacate all areas under its illegal occupation,” Dubey said.