100 killed in Maha heaviest ever rain in four decades

100 killed in Maha heaviest ever rain in four decades 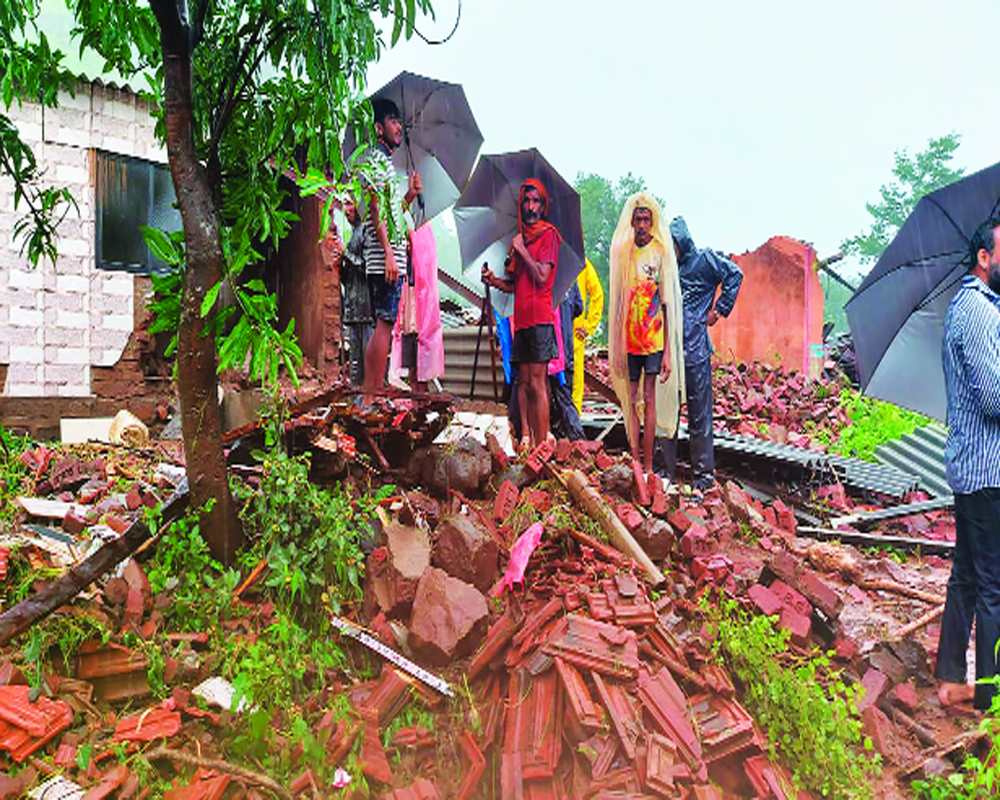 Over 50 dead in Raigad landslide

At least 100 people were killed and several others feared trapped under the debris in landslides and monsoon-related incidents like house crashes and incidents of drowning in Maharashtra on Friday as heavy rain pounded many parts of the State for the fifth consecutive day.

In what is being described heaviest-ever rain witnessed in the State during the last four decades in Maharashtra, a major landslide at Tali village in Mahad taluka of Raigad district in Konkan region claimed at least 50 lives, while several others were still feared trapped under the debris.

“At least 50 bodies have been recovered from the Taliye-Madhiliwadi landslide site. Several more are feared trapped under the debris,” senior NCP leader and former Minister Sunil Tatkare said, while apprehending the toll may go up.

Casualties were reported from places like 15 in Poladpur in Raigad district (15), at Khed in Ratnagiri district (11), at Mirgaon in Satara district (12) and Mumbai (4). There were also unconfirmed incidents from other places in the State.

As the State reeled under one of the worst-ever flood situations, the Indian Army, Navy, Air Force, Coast Guard, NDRF and Maharashtra government agencies launched extensive rescue and relief operations in the coastal Konkan region and western Maharashtra.

All through Friday, helicopters of different agencies hovered in the skies of the coastal Konkan region looking for marooned people, while rescuers swam in water to reach out to the stranded people.  Hundreds of stranded people were rescued by the relief agencies using helicopters and other means, while as many as 22 people trapped in a bus in Raigad were rescued in the afternoon.

Meanwhile, after taking  stock of the situation in the rain-ravaged areas in the State, Maharashtra Chief Minister Uddhav Thackeray announced a compensation of Rs 500,000 for the next of kin of each deceased and free treatment for all the injured in these disasters.

The Chief Minister said the situation that prevailed in Raigad, Ratnagiri, Palghar, Thane, Sindhudurg, Satara, Kolhapur and Sangli was of varied nature. “The overall situation in the state is grim,” he said.

The Chief Minister urged the people in the districts and Sangli and Kolhapur to be extra vigilant as the discharge from the Koyna Dam discharge has also started. “We have given orders to the local authorities to evacuate all the flood victims, ensure accommodation in temporary camps with food, water, medicines and other requirements,” he said.

Traffic between Mumbai and Goa - both by way of road and rail -- virtually came to a standstill for the second day on Friday, as the passengers remained stranded at various places between the two places.  While the Mumbai-Goa Highway has been closed for traffic due to severe flooding, the Konkan and Central Railways cancelled at least 30 trains 30 trains, diverted a dozen trains and short-terminated eight trains due to heavy rain.

While the boulder slide that took place at Tali village in Raigad district was the worst rain-related mishap, the neighbouring Ratnagiri district continued to reel under intense flooding. At Chiplun town where many areas remained submerged under water, at least 11 Covid-19 patients died at Kamathe Hospital at Chiplun, as they could not be treated on time owing to the flood situation in the town.

There were reports of casualties in western Maharashtra where more than 20 persons were feared at Ambegar and Mirgaon in Phatan taluka of Satara district in western Maharashtra. At le+ast 25 major roads in the neighbouring Sangli districts remained under thick sheets of water, resulting in the authorities closing down Sangli-Kolhapur by-pass road for traffic.

In Mumbai, four persons were killed and seven others injured in a house crash at Govandi in north-east Mumbai. The injured persons were rushed to Rajawadi Hospital and Sion Hospital. The incident took place at Plot No 3 near the Bombay City Hospital at Shivajinagar in Govandi.

Meanwhile, the Ratnagiri district administration has set up four temporary shelters to house the flood victims, while the Raigad district authorities set up camps to shelter the flood affected people.

Meanwhile, the IAF undertook flood-relief operations in the flood-affected Chiplun and Khed in coastal Konkan region.

The IAF has positioned two Mi-17V5s and two Mi-17s for flood relief operations. Another helicopter is standing by at Pune for any emergency requirement.

On its part, the Western Naval Command has mobilised Flood Rescue Teams and Helicopters to provide assistance to the State administration. Despite adverse weather conditions and widespread inundation in affected areas, a total of seven naval rescue teams departed by road for deployment to the Ratnagiri and Raigad districts.

Airlift of marooned personnel from Raigad district is also being undertaken.