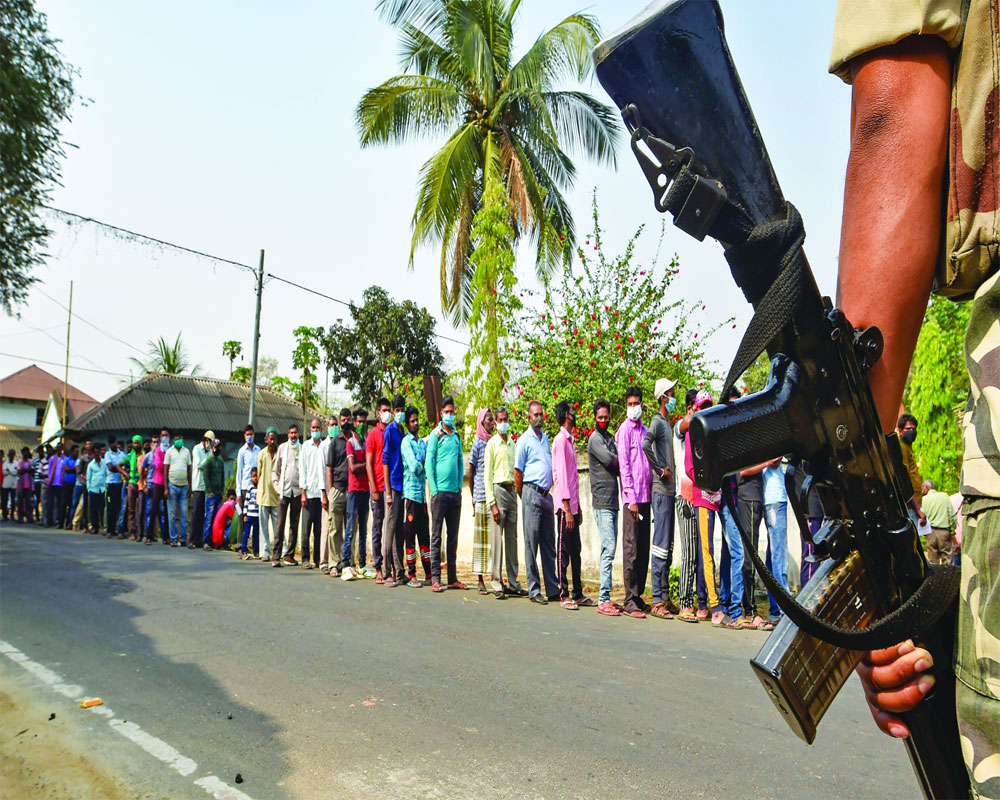 The first phase of Bengal Assembly elections concluded on Saturday amid reports of sporadic violence with little more than 82 per cent voter turnout, said officials, adding the elections were by far peaceful.

Long queues of voters were seen at many booths throughout the five districts till evening.

East Midnapore recorded a turnout of 80.51 per cent while in neighbouring West Midnapore it was 80.12 per cent. Jhargram witnessed a polling of 80.55 per cent whereas voter turnout in Purulia was a tad low at 77.07 per cent, followed by Bankura where about 79.90 per cent voters had exercised their voting rights.

Incidents of violence were reported from Salboni region of West Midnapore and Sabajpur of South Contai seat in East Midnapore district where the vehicle of Soumendu Adhikari, the youngest brother of BJP leader Suvendu Adhikari, was vandalised and his driver badly beaten up by alleged Trinamool Congress supporters.

Soumendu, a former TMC leader and Contai Municipality chairman, recently joined the BJP like his elder brother and their father Sisir Adhikari, the local MP.

“I had rushed to a booth after receiving complaints that the TMC men had driven out our polling agent and were giving false votes… This angered the TMC goons and they vandalised my car and beat up my driver,” he said.

The attack was carried out under the leadership of TMC block president Ram Govind Das and his wife, a panchayat pradhan, as my arrival to the area failed their plans to rig polling, Adhikari said.

At Salboni former Bengal Minister and CPI(M) candidate was Sushanto Ghosh twice attacked and heckled by alleged Trinamool men when he tried to stop them from capturing booths.

“That I raised questions as to why they were not allowing the voters to cast votes they attacked me and smashed the wind shield of my car,” he said.

An EC official said three persons were arrested in connection with the incident and a report has been sought from the district administration.

Stray violence was also reported from Majna in South Contai where voters blocked road claiming that the VVPAT machines were showing that their votes were going to a particular party even though they were voting for some other party.

A contingent of Central forces was deployed to control the situation, said an EC official, adding that the VVPAT machine was replaced.

Elsewhere an alleged BJP supporter man, in his mid-30s, was found dead in Begumpur area of Keshiari in West Midnapore district, said police, adding the victim had been identified as Mandal Soren.

Despite the BJP claiming that Soren was their men, the district administration told in its report to the EC that the death was not connected to the elections.

Another suspected TMC supporter was allegedly drowned to death at Mangaldihi area of Parui block in Birbhum district. The TMC alleged BJP’s hand in the man’s murder while the saffron party denied the charges.

Curiously for the first time in many years it were the TMC supporters complaining against the Opposition that they were not being allowed to vote by them similar situations were witnessed at Patashpur and Bhagwanpur constituencies in East Midnapore where the TMC supporters complained that they could not venture out of their houses as the BJP men threatened attack in the evening.

More than 73 lakh voters were likely to vote to decide the fate of 191 candidates in these 30 seats for which polling was held in 10,288 booths with the help of 73,000 Central police personnel.