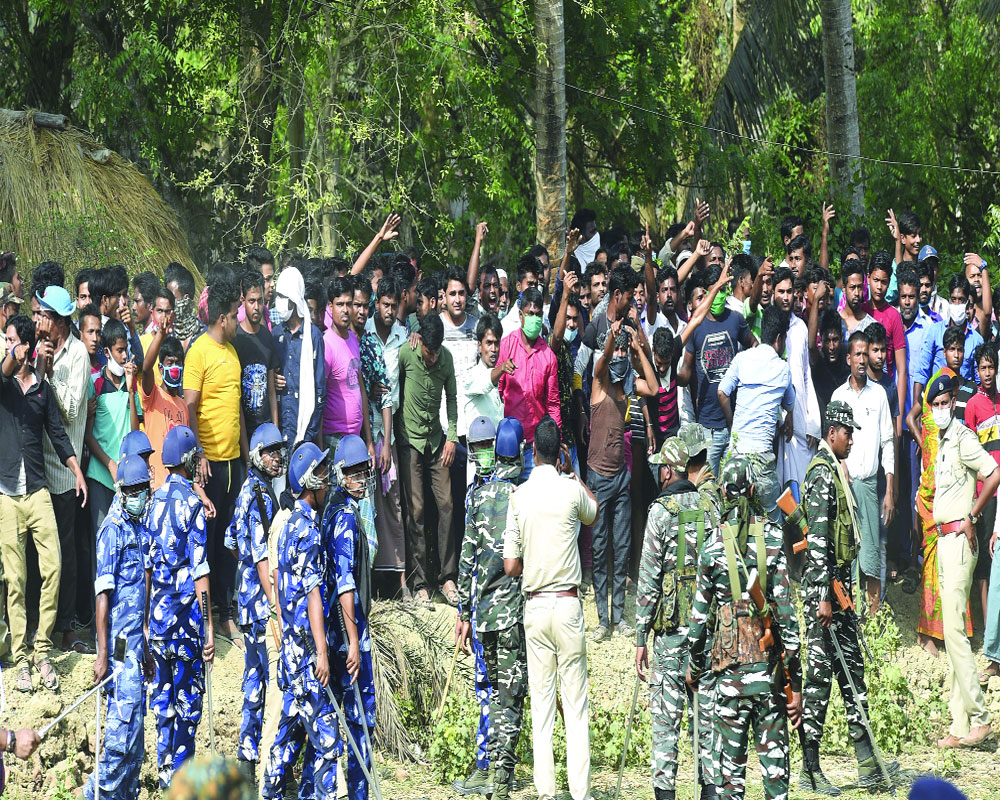 Amid accusation by West Bengal Chief Minister Mamata Banerjee that Home Minister Amit Shah was influencing the Election Commission and the Central forces into manipulating the conduct of elections, the second phase of polling ended in West Bengal with an impressive turnout despite reports of stray violence, rigging, threats and alleged murder of political workers coming in from both East and West Midnapore.

Though elections were conducted in 30 constituencies across four districts, Nandigram — from where Mamata is fighting against her protégé-turned-challenger Suvendu Adhikari of the BJP — remained at the centre stage of all controversies with Mamata bringing charges of rigging and violence by BJP supporters.

Just as the Chief Minister personally intervened entering a booth at Boyal village following reports that BJP men had turned TMC polling agents out of the booth, hundreds of supporters from two sides armed with brickbats and lathis gathered in the area shouting slogans.

Even as the police and Central forces had a trying time to keep the two sides away from each other, the TMC chief got trapped inside the booth for more than two hours. The administration had to arrange for a large contingent of security men to escort her back to her temporary residence at Reyapara.

This, apparently to protect her from hundreds of people standing on road at various pockets raising Jai Shri Ram slogan.

At Reyapara a furious Chief Minister said, “I am not concerned about my victory in Nandigram which is anyway coming … my concern is for democratic norms … elections are festivals of democracy and I am sorry to say that the Election Commission is acting partially at the behest of Home Minister Amit Shah who is instructing the Commission and the Central forces.”

Mamata said that she had sent 63 complaints to the Commission but not a single of them has been taken care of.

“We are considering legal action as our voters are not being allowed to vote,” she said.

The Commission, however , sought a detailed report of the alleged violence, sources said.

She also attacked Prime Minister Narendra Modi for breaking the model code of conduct saying, “being a Prime Minister how can he use Government facilities to campaign and that too on election days… It is strange that he is coming here on every election date using the entire Government machinery to influence the voting pattern… is this not a violation of model code of conduct.”

Her rival Adhikari who looked a contented man said, “My 80 per cent polling is over and we are winning … Sorry this time Mamata Begum is losing.” He added, “It is the fear of defeat that she is talking nonsense… she knows that she has been defeated … she is losing Bengal…” In his comments critics saw a desperate bid to polarise the election atmosphere.

A desperate Chief Minister even called up Governor Jagdeep Dhankhar --- with whom she had no love lost --- seeking interference and reddressal. She however refused to comment on what transpired between her and the Governor or the Commission officials.

“The BJP are attacking our men and candidates not only in Nandigram but all places where elections are taking place,” Mamata commented in an ironical reminder of similar refrains being by the Opposition parties in Bengal for the last one decade or so.

Mamata’s complaints were not unfounded as reports of violence and rigging came in from other constituencies too. A TMC supporter was dragged out of his party office at Keshpur in West Midnapore and hacked to death, party men said accusing the BJP of the attack. Seven people had been arrested in that incident. A BJP supporter allegedly committed suicide by hanging at Nandigram after he was intimidated by the TMC men, his family members said though the police said there was no external injuries found on his person. The Commission had sought report on both the incidents.

In a third incident the polling agent of another TMC candidate Siuli Saha was attacked and hit on his head by alleged TMC men. The victim had been hospitalised with Saha complaining of large-scale rigging by the BJP men.

Notwithstanding the second phase saw a healthy 80.43 per cent polling by 5 pm with Nandigram witnessing 80.79 per cent casting their votes.

With long queues of voters still shown in many areas the polling percentage could go up by another 5-6 per cent, officials said.

Meanwhile, the BJP had lodged a complaint with the ECI alleging how the Chief Minister blocked polling at Boyal booth in Nandigram for more than two hours. “We have drawn the attention of the Commission on how the Chief Minister stopped the voters from coming to the booth … she also broke prohibitory orders by taking along with her more than 20 people inside the booth,” BJP leader Sisir Bajoria said.

Amid stray violence, 65 per cent vote in first phase of panchayat polls