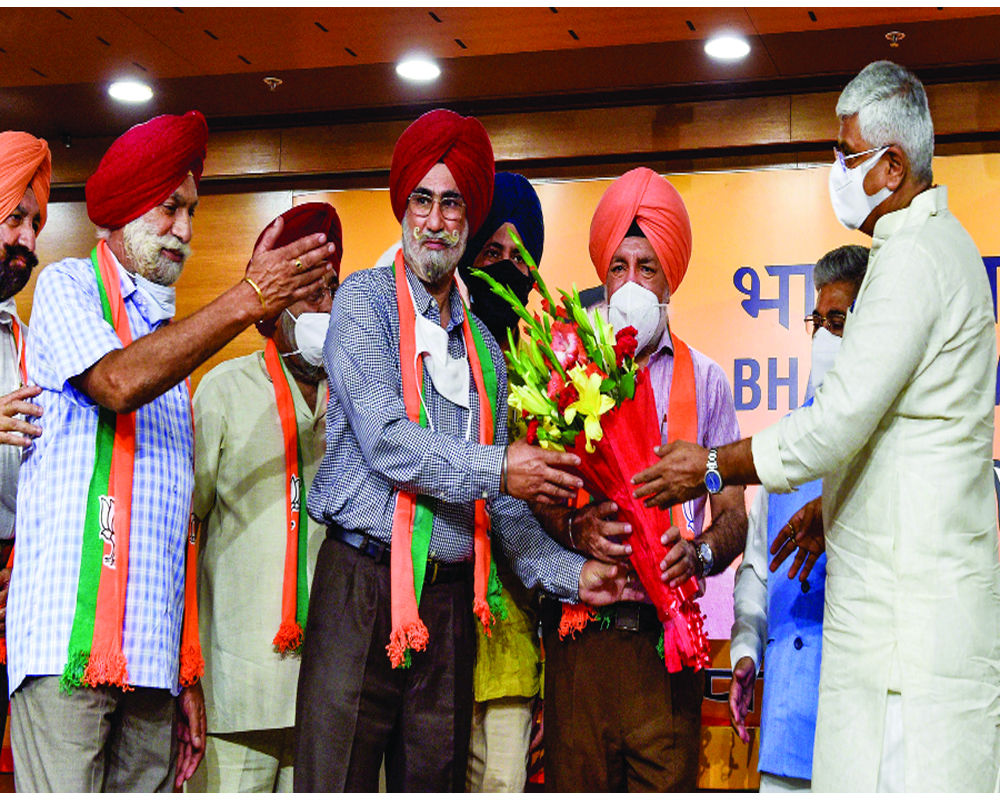 In a run up to the 2022 Assembly polls in Punjab, the BJP has stepped on the accelerator with Union Home Minister Amit Shah placing himself on the driver’s seat before the poll process.

Worst-affected by the farmers’ ongoing agitation against the Centre’s three agri-marketing laws and the resultant political circumstances in the State, the saffron party on Thursday inducted six “prominent Sikh personalities”, besides directing its State leadership to put up its act together by taking the workers along.

The saffron brigade, as of now, is on a sticky wicket with its former alliance partner, Shiromani Akali Dal (SAD), tying up with the Bahujan Samaj Party (BSP), in an apparent attempt to woo the Dalit voters of the State - which is 32 per cent of the State’s total population. What is more, the farmers, which also form a considerable voter base in the State, are also at swords’ points against the party for introducing the contentious farm bills.

The development came a day after the party’s State leadership held a brainstorming session with BJP national president Jagat Prakash Nadda and Amit Shah to chalk out its strategy for the ensuing Assembly polls in the State, scheduled to be held early next year.

The saffron brigade not only discussed the prevailing political scenario in Punjab, but also deliberated upon the possible alliances, identifying areas to be focused upon, besides holding the ways to respond to the rebellion within the state BJP unit over the farm bills issue.

Sources informed The Pioneer that the BJP high command was unhappy with the party’s Punjab leadership, especially for its failure to get in touch with the party workers and the entire cadre at the grassroots causing loss of support for the party.

“Because of this farmers’ agitation, it was really hard for the BJP leaders and even workers to move out or hold meetings, even at a small scale. Though several campaigns were started, and programmes were launched to make the farmers, and the people aware of the benefits of the farm bills and other decisions taken by the Central Government, but all that was of no use as these were badly disrupted by the farmers or their supporters,” a senior BJP leader told The Pioneer.

It was without any doubt that the farmers’ agitation against the agri bills has made a great impact on the politics of the region, especially Punjab, with the saffron party being the biggest loser. Over the past one year, the BJP leaders and workers in Punjab, and also in other states including Haryana, have witnessed social boycotts from the masses, strong protests, unending dharnas outside their residences, and what not.

Perturbed, the party’s two senior leaders and former Ministers came out in open to question the party high command regarding its stand on the farm bills, while also openly speaking about their dissatisfaction with the top leadership in handling the farmers’ protest.

“We could not step out of our houses. Everywhere our party leaders go, they were hounded, gheraoed. The state leadership was totally detached from the party workers due to COVID and also these agitations. And that’s why the central leadership wanted us to launch contact programmes and get in touch with the party cadre,” the party leader said.

Party sources indicated that considering the prevailing circumstances in the state, the party stalwart and key strategist Amit Shah has taken upon himself to bring out the state party unit out of the marshy grounds. The BJP has all along been declaring to field its candidates on all 117 seats in the state.

At the same time, the changing political equations in Punjab - SAD and BSP forging an alliance, three AAP MLAs shifting loyalties towards Congress, and prevailing infighting within the Congress party - has forced the party to chalk out its own line of attack and identify the possible alliances and areas to focus upon.