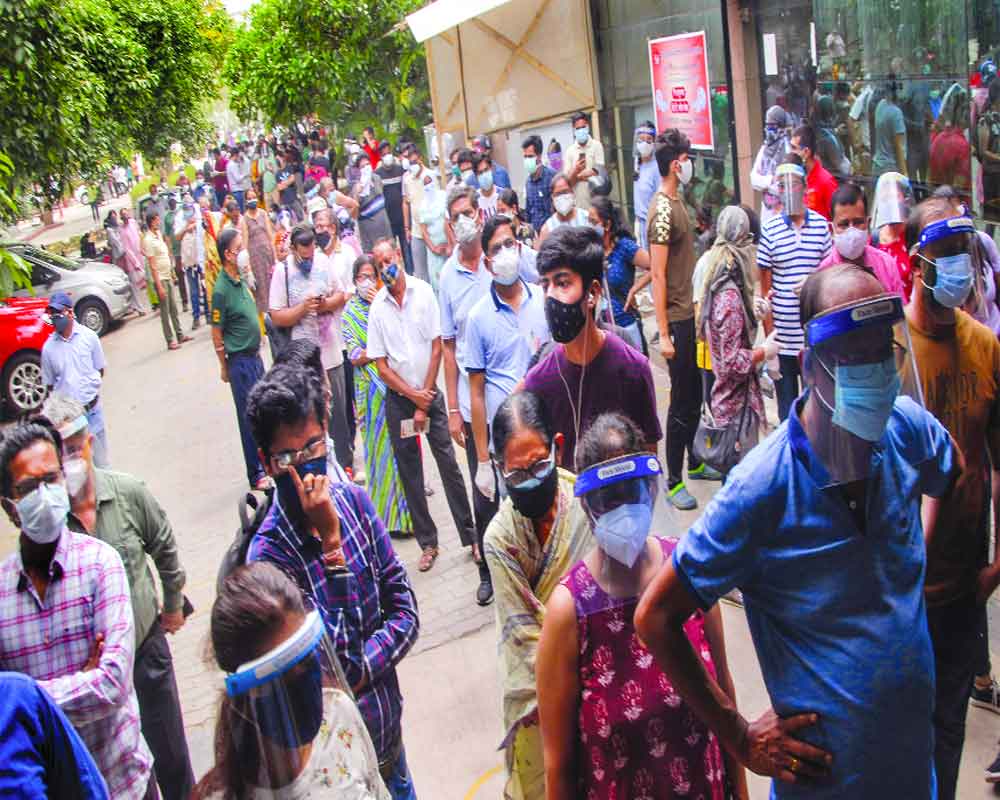 India is the biggest producers of vaccines, but its own nationwide vaccination drive launched on January 16 seems to be faltering amid mismatch between the vaccine availability and the number of seekers in urban India with various States complaining about vaccine shortage.

So far, over 19 crore people have registered on CoWin — the Government’s portal — including around 6.42 crore who registered from May 1 to 7, as per the data available from the Union Health Ministry.

The huge demand for vaccination is from urban areas mainly.

However, so far, just 2.6 per cent of the total eligible population has been fully vaccinated (two doses). On the other hand a country like the USA which was hit hard by the Covid-19 for better part of the last year has vaccinated at least 40 per cent of its population  with both jabs.

Realising that vaccines availability is going to take time,  the Union Health Ministry last week asked the States to prioritise administering the second dose and

use supplies from the Centre in a 70:30 ratio of second and

Clearly, because of the shortage of the vaccines and the Government opening up the vaccination drive for those above 18 from May 1 (an estimated 59 crore people that become eligible to receive the shot, as per the affidavit filed by the Union Health Ministry in the SC,  many from both the categories who have registered on the Co-Win will have to wait for little more before they could get the jab.

It is not only those in the age group of 45 and above who  are complaining of not getting the vaccines so are those in the age bracket of 18 plus to 44 which was an estimated 59 crore population As of May 7, just 11.81 lakh have  received the shot.

What’s more, overall vaccination numbers too are declining. On May 9, around 6.89 people were vaccinated, on May 8 the number was 20.15 lakh while on May 7 and May 6, the number of people who were inoculated was 22.89 lakh and 23.59 lakh respectively.  Dismal figures given that inoculation had reached as high as 40 lakh in early April.

At the current pace of vaccination, experts said it would take nearly three months to vaccinate just those registered till now. At the current rate of vaccination - less than 17 lakh a day - the 170-crore remaining doses needed to fully cover the entire 94-crore adult population would take about 1,000 days - or close to three years. The new phase of vaccination has also slowed down because now the private entities are dealing with multiple issues such as shortage, procurement as well as transportation etc

The current production capacity of Serum Institute and Bharat Biotech is 6 crore and 2 crore per month or roughly 26 lakh doses per day. Both companies are enhancing capacity, but that might have to wait till July, as was also pointed out recently by Aadir Poonawalla, CEO of SII.

The Government is already drawing flak for exporting the vaccine instead of vaccinating its own people. “The Centre has donated 6.6 crore since March. On April 22, when India had the world’s highest number of 3.32 lakh cases, the Central Government had also exported two lakh vaccines to Paraguay,” Delhi Deputy Chief Minister Manish Sisodia said recently.

Experts also pointed out that no advance purchase pact was made with vaccine makers and no funds were made to them to increase production have led to shortage of vaccines.

Soumya Kanti Ghosh, group chief economic adviser at SBI, in a note on recently points out the gaps. “We have given only 160.5 million doses with around 131 million taken the first dose and 31.5 million the two doses. The percentage of people who have taken two doses to total vaccination doses is a low 19.5 per cent. However, the daily vaccination is going down now with an average of 17 lakh compared to an average of 28 lakh in April.

“Given this trend, we believe we can only be able to vaccinate 15 per cent of the population by October which is required for herd immunity but only if we are able to vaccinate around 55 lakh daily in September and October,” he said adding that accelerated vaccination is the only solution to contain the raging pandemic.