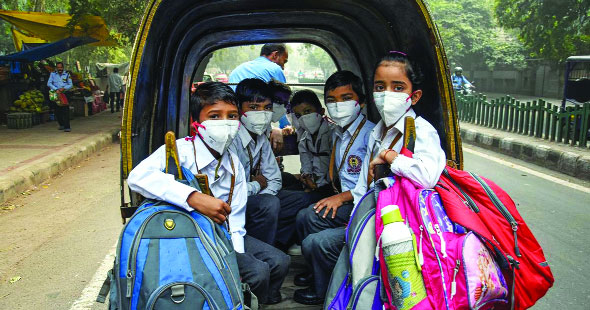 With a significant improvement in the Capital’s air quality, the Delhi Government on Wednesday decided to resume physical classes in schools, colleges and all educational institutions and reopen Government offices from November 29.

Addressing the media, Environment Minister Gopal Rai said CNG and electric trucks, along with the emergency service trucks, will be allowed to enter Delhi from November 27.

To encourage Delhi Government employees to use public transports instead of personal vehicles, Rai said the AAP Government in Delhi will provide shuttle bus service from the Delhi Secretariat to ITO and Indraprastha metro stations.

“There are colonies and areas like Nimri Colony, Gulabi Bagh, Timarpur, where a majority of Delhi Government employees come from. In all such places, the Kejriwal Government has decided to start special buses to facilitate the employees’ commute,” said Rai.

Stressing his Government commitment to fight  air pollution in all possible ways,  Rai said violation of 14-point guidelines by construction and demolition sites will lead to immediate termination of work and a penalty.

“Since the last three days, there have been improvements in Delhi’s pollution levels. If we look at the average air quality index from before Diwali, Delhi has reached those levels again. The pollution levels had been steadily rising after Diwali. Considering that, multiple restrictions were put in place, apart from the routine processes. Today, we held a review meeting with the higher officials of Delhi, and many important decisions were taken.

“We are reopening things, but our fight against pollution will continue. Therefore, it is necessary for everyone to cooperate, because together we can reduce this pollution further so that Delhi can have better air. So far 1,221 sites have been inspected. Out of which construction work was stopped at 105 places. Close monitoring is being done daily by the government. Conditions will definitely improve. But the Government will not shy away from taking any tough step if needed,” he said.