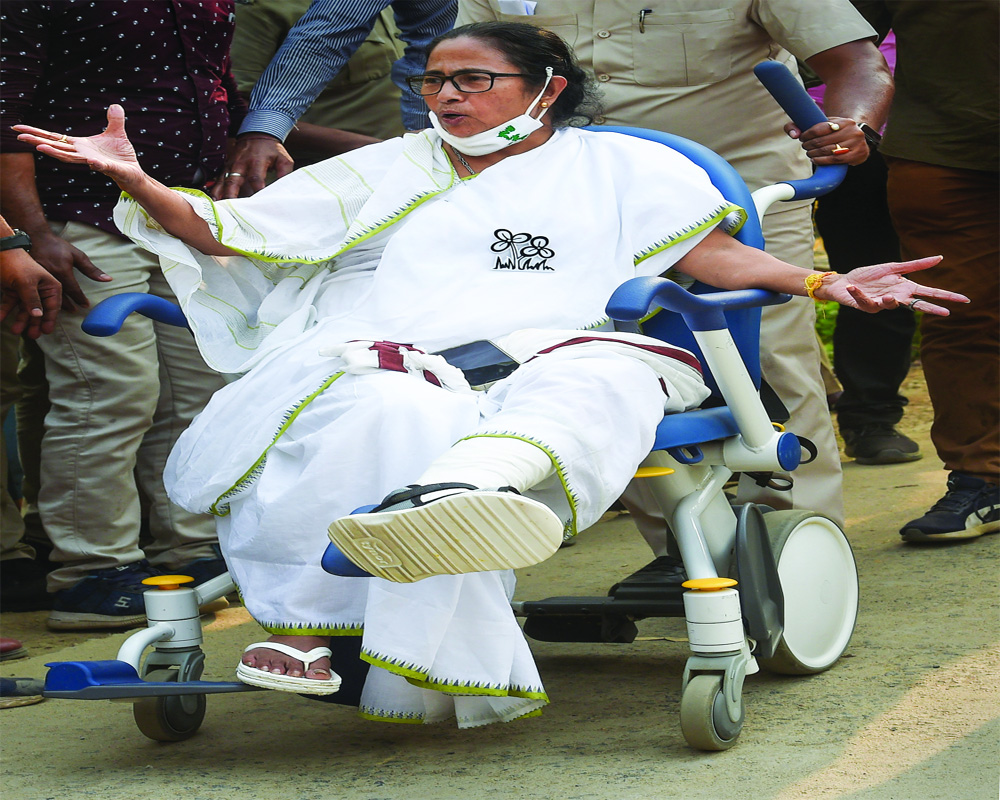 On the eve of the battle royale for Nandigram in the second phase of Assembly polls in West Bengal, Chief Minister Mamata Banerjee on Wednesday wrote to top Opposition leaders, including Sonia Gandhi and Sharad Pawar, saying the time has come for a “united and effective struggle against BJP’s attacks on democracy and the Constitution” and “presenting a credible alternative to the people of India”.

She said the talks on forming an anti-BJP alliance should be held after the Assembly elections, results for which will be declared on May 2.

Facing a tough battle against the BJP in the Assembly polls, Mamata’s letter is being seen as an attempt to portray herself as a rallying point for all parties opposed to the BJP which has mounted an aggressive campaign to dislodge her from power in West Bengal after a 10-year rule. Mamata is pitted against his former lieutenant Suvendu Adhikari.

Incidentally, around 23 Opposition parties had come together at the “United India Rally” organised by Mamata in January 2019 to resolve to defeat the BJP in the Lok Sabha elections that year. But the BJP not only made a big dent in Mamata’s own citadel by winning 18 Lok Sabha seats in Bengal but also decimated Opposition parties like the Congress and the Samajwadi Party among others.

In her 7-point attack on the Modi Government, Mamata said that the Centre has been “creating problems” for the elected Governments by “misusing” the office of the Governor. She also accused the BJP of trying to establish a one-party “authoritarian rule” in the country.

“As the chairperson of the All India Trinamool Congress, I shall work wholeheartedly with you and all other like-minded political parties in this battle. We can win this battle only with unity of hearts and minds, and by presenting a credible alternative to the people of India.

“After the conclusion of the ongoing Assembly elections, I suggest that we deliberate on these issues and chart a plan of action,” she said.

“I am writing this letter to you, and to several leaders of non-BJP parties, to convey my serious concerns over a series of assaults by the BJP and its Government at the Centre on democracy and constitutional federalism in India,” the CM said in the letter.

Citing the example of West Bengal, where Governor Jagdeep Dhankar has pulled up the TMC administration on several occasion for failing to maintain law & order, Mamata said that the Governors have been functioning like ‘BJP’s office bearers and not as neutral Constitutional authorities. The TMC chief also criticised the Centre, claiming that it has been “brazenly and vindictively” misusing Central agencies including the CBI and ED against political opponents.

Moreover, Mamata also claimed that the Modi Government is deliberately withholding the transfer of funds to State Governments and accused the Centre of downplaying federalism by disbanding the Planning Commission, formed by the Centre back in 1950, which was dissolved by PM Modi in 2014.

“The BJP has amassed unlimited resources from questionable sources, which it is using to topple duly elected non-BJP Governments and to engineer defections in non-BJP parties,” Mamata alleged.

She also came down harshly on the Union Government’s push for privatisation and claimed that the Centre-State relations have been at the lowest today, and blamed the PM’s “authoritarian conduct” for the same

Referring to the passage of the National Capital Territory of Delhi (Amendment) Bill by the two Houses of Parliament, she said that it is an “extremely grave” development.

“With this law, the BJP Government at the Centre has snatched away practically all the powers of the democratically elected Government of Delhi, and vested them in the hands of the Lt Governor, a nominee of the Centre. The Lt Governor has been made the undeclared Viceroy of Delhi, acting as a proxy for the Home Minister and the Prime Minister,” she said.

In her letter, she also said that despite losing to the AAP in both 2014 and 2019, the BJP was “unwilling” to accept the people’s mandate.

She also alleged that the BJP Government has been “brazenly and vindictively misusing” the CBI, ED and other institutions against leaders and functionaries of non-BJP parties for its own partisan political ends.

Citing the examples of both West Bengal and Tamil Nadu, where Assembly elections are now underway, she accused the Government of “unleashing” the ED to conduct raids on functionaries of the All India Trinamool Congress and DMK.

Mamata also said that the move by the Government of disbanding the National Development Council, Inter-State Council and the Planning Commission, and replacing it with NITI Aayog, is to “deactivate” every single platform where State Governments used to traditionally place their legitimate demands, needs, concerns and views before the Central Government.