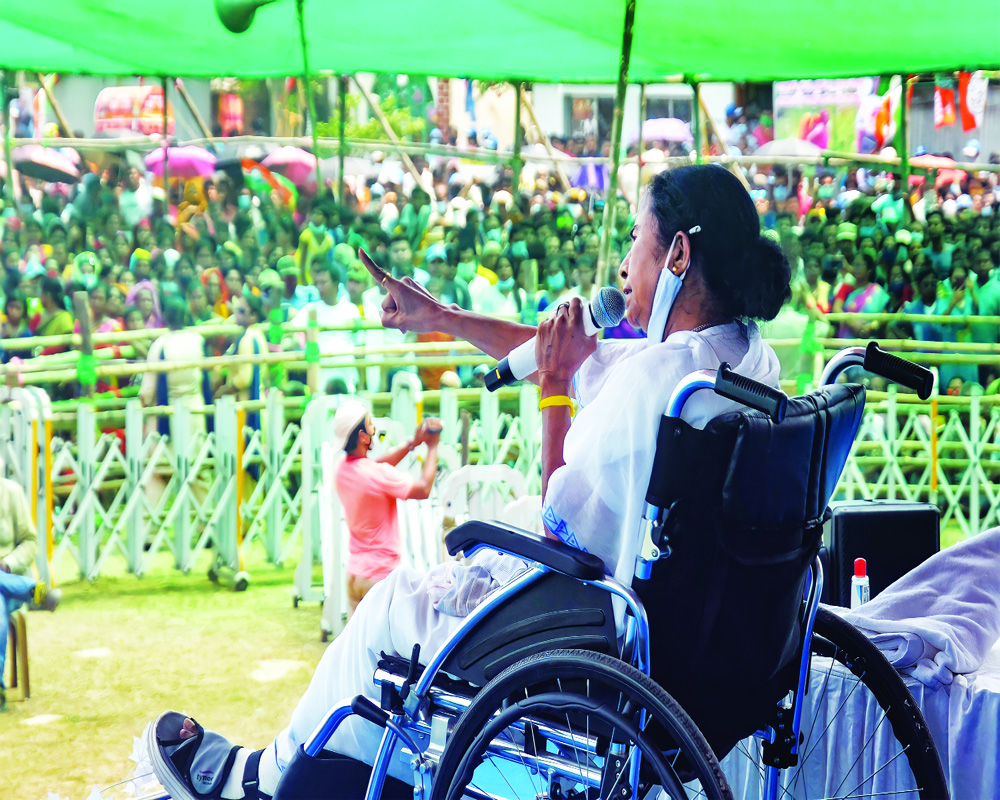 On a day Prime Minister Narendra Modi and TMC supremo Mamata Banerjee traded charges on the Cooch Behar killing, the  Election Commission (EC) on Monday imposed a 24-hour campaigning ban on the West Bengal Chief Minister for her “highly insinuating” and “provocative remarks” that the poll regulating body described as having “serious potential” to lead to a breakdown of law and order during elections.

As per the order issued by the EC, the ban will come into effect from 8 pm on April 12, and continue till 8 pm on April 13. The action was taken by the polling body after Mamata was found “violating the Model Code of Conduct (MCC)” for appealing to the voters on communal lines.

Condemning Mamata’s statements made during poll rallies on April 7 and 8, the EC advised her to desist from using such statements in public while model code of conduct is in force.

The EC noted that the TMC chief made “highly insinuating and provocative remarks laden with serious potential of breakdown of law and order and thereby adversely affecting the election process.”

The EC said, “In fact, it is a matter of deep regret that a media narrative was sought to be weaved hour after hour to misguide the biggest stakeholder which is the voters by a candidate who also happens to be the CM of the State. At least this should have been appreciated that the sideshow was fraught with immense potential to have adverse impact on law and order across West Bengal and may be some other States. And all this was being done when the election process was/is on. There could not have been a greater misdemeanour,” it said.

Lashing out at the EC order, Mamata said she would stage a dharna in the city on Tuesday in protest. The TMC questioned why only Mamata has been punished and BJP leaders left off hook.

Meanwhile, Modi launched a fierce broadside against Mamata. “Didi has been instigating her workers against the Central forces. Do not do this. Didi o didi, if you want to take out your anger, abuse me. But don’t insult Bengal’s dignity and tradition,” he said.

“Bengal won’t tolerate your arrogance, tolabaaz, cut money syndicate because people want ‘asol poribartan’ (real change),” he said adding “Didi has been talking about Khela Hobey but the truth is Khela for her is Shesh (ended)… on May 2 Didi Jacchhe (going),” said the PM.

Lapping up a proverbial “full toss” delivery during election times proffered by one of Mamata Banerjee’s lieutenants Sujata Mondal Khan who reportedly equated the State’s dalits with beggars, the Prime Minister said “Didi’s nominees abuse Bengal’s dalit people calling them beggars… Nobody thought that such words would be said in Bengal and by someone so close to the Chief Minister,” wondering why Banerjee would not apologise for the statement given by one of her lieutenants.

The Prime Minister on Monday held rallies in Nadia and North 24 Parganas districts both of which have overwhelming SC population. In an interview, Sujata Mondal had alleged attacked the SC community saying that, “the SCs here (in Bengal) are beggars by nature. Even after getting so much of service from Mamata Banerjee, they are selling their votes to the BJP.” Incidentally the speaker herself is come from the same community.

He said the voters of Bengal had hit so many fours and sixes that BJP had already completed a century (of seats) in the first 4 phases of Assembly polls. “They have wiped out the Trinamool in half the match (aadhe mein poora saaf),” he said.

“She ruled Bengal in the name of Maa Maati Manush for 10 years … and she has done such a mess that now instead of listing her success she is only using the name of Modi, Modi, Modi,” he said adding how “TMC Government promoted syndicate raj, tolabaji (extortion) and criminalization.”

On her part,  Mamata Banerjee  went all guns blazing at Prime Minister for “crossing all lines of dignity” while referring to her.

Attacking the Prime Minister for using his foreign trips to win popularity in India Banerjee said “Modi, you went to Trump (former US president) to play the Trump card and now you went to Bangladesh to play the Bengal card” in an apparent reference to the his visit to Orakandi in Bangladesh where the birth place Harichand Grichand Thakurthe father figures of Matua community (Scheduled Caste) is situated.

The Matuas are numerically a formidable community of about 80 lakh people dominating the voting pattern in about 25-35 seats in Nadia,North 24 and South Parganas and parts of Burdwan districts.

Referring to the “irresponsible statements” made by Bengal BJP president Dilip Ghosh and his predecessor Rahul Sinha regarding the central forces firing in Cooch Behar district in North Bengal she said “I always tell my colleagues in the party to control their tongues these kinds of words are not good in politics … I am ashamed that these kind of leaders live in Bengal … they have insulted Bengal … they should be banned from speaking in public and should be jailed.”

Earlier Ghosh had on Saturday said that “if the TMC goons do not stop playing mischief during the elections and continue to loot votes then there will be more Sitalkuchis taking place in Bengal.”