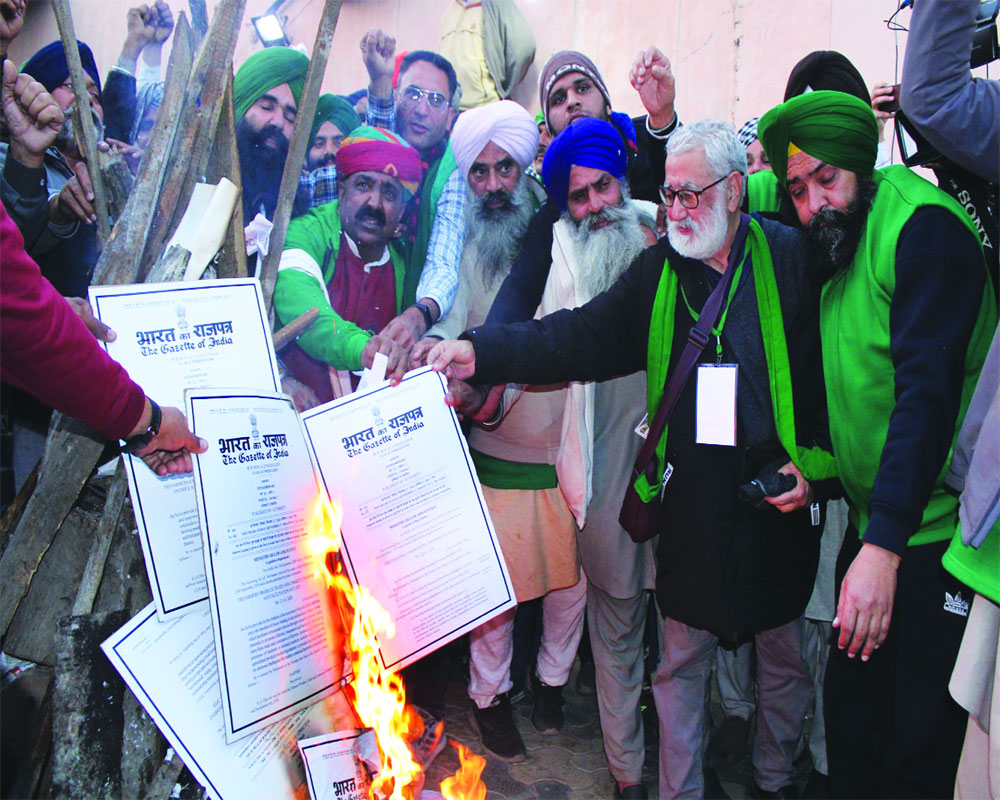 Farmers protesting at Delhi borders burnt copies of Centre’s new agriculture laws at all demonstration sites on the festival of Lohri on Wednesday, as a mark of protest against the legislation. Meanwhile, All India Kisan Sangarsh Coordination Committee (AIKSCC) on Wednesday claimed farmers burnt copies of the Act at more than 20,000 spots all across the country.

Many farmer leaders also threw copies of the farm laws in the bonfire created on the premises of the Kisan Andolan office.

According to Paramjeet Singh of Samyukta Kisan Morcha, around one lakh copies of the three agri laws, were burnt at the Singhu border alone.

Lohri is widely celebrated in Punjab and Haryana to mark the harvesting of rabi crops. People traditionally celebrate it by circling around bonfires, throwing food items — peanuts, puffed rice, popcorn, etc — into the fire, singing folk songs, dancing and feasting.

“The celebrations can wait. We will celebrate all these festivals the day our demand of repealing of these black laws are met by the Centre,” said 65-year old Gurpreet Singh Sandhu who hails from Haryana’s Karnal district.

“This Lohri is filled with struggle,” said Rajbir Singh, a 34-year-old farmer from Punjab’s Barnala. “It is minus the fun, the song and the dance we used to have back home on Lohri. But I am happy to be here and celebrate it with my family of farmers this time.”

“Today, we have burned the copies, tomorrow the Centre will burn them. They have to, we will make them do it,” he added.

Several bonfires were lined up at the Delhi-Haryana border stretch, the nerve centre of the farmers’ agitation. The protesting farmers raised slogans, sang songs of resistance and hope as they orbited the bonfire, burning copies of farm laws and praying for the success of their protest.

“AIKSCC has appealed to all districts within 300 km of Delhi to mobilise thousands of tractors for the Republic Day Tractor Parade in Delhi. All should assemble at the borders a day before for the parade,” said AIKSCC in a statement.

“Along with the preparation for Mahila Kisan Diwas programme on January 18, Mahapadavs are planned before Governors in Andhra Pradesh, Telangana, Kerala from January 23 to 25, in Maharashtra from January 24 to 26 and in Odisha on January 23,” stated the AIKSCC.

“After reading the order of the Supreme Court it is also clear that the Centre Government has falsely accused farmer leaders of not pointing out ‘even one clause’ which is ‘detrimental to their interests’,” it stated.

“The Centre Government has not only failed the farmers, it has also failed in its duty to put correct facts before the highest court of the Country,” it further stated.