Gangster killed in court by rivals in lawyer guise

Gangster killed in court by rivals in lawyer guise 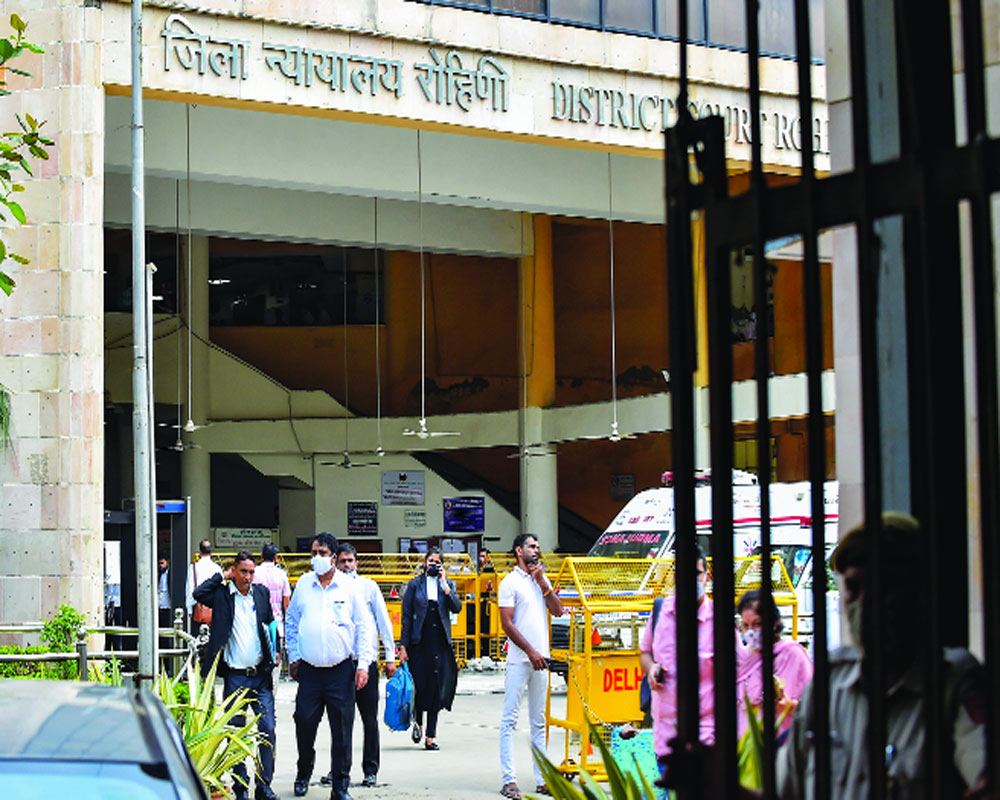 The force’s 3rd battalion escorting the gangster then fired back, killing both the attackers on the spot.

Gogi received three to four bullet injuries and was taken to a nearby hospital, where he was declared brought dead, while two assailants identified as Rahul Tyagi and Jagdeep, alias Jagga, died on the spot. Around 20 rounds were fired.

Delhi Police spokesperson Chinmoy Biswal said swift action by the police team in launching a counter-fire on the two assailants who were in lawyers’ attire saved the lives of innocents. “Both the assailants are dead along with undertrial prisoner Gogi,” said Biswal.

“All three gangsters dead. No other injury or death occurred,” it said.

According to Pranav Tayal, the Deputy Commissioner of Police (DCP), Rohini district, around 1.15 pm Gogi, previously involved in 30 heinous crimes, was brought to the court of Judge Gangandeep Singh for criminal trial when the two assailants in lawyer’s attire fired at him.

“As Gogi was hit, the police team on escort responded and in the counter-fire both the assailants received gunshot wounds and were immobilised. All three persons were declared brought dead at the hospital,” said the DCP.

“A case under appropriate sections has been registered and investigation has been taken up in accordance with the guidelines of apex court and NHRC,” said the DCP.

Meanwhile, Joint Commissioner of Police, Northern Range, has been tasked to enquire into the incident and submit a report.

A lawyer, who doesn’t wish to be named, told The Pioneer that a hearing was going on and there were around 12 to 15 people inside the court when the incident occurred. “Two men dressed as lawyers fired upon Gogi following which people present in the room rushed out to save their lives and the judge also went back to his office just behind the courtroom,” he said.

“The metal detection machines have not been working for quite a longtime but the police don’t check and ask lawyers for their ID. That is the reason the assailant entered the court dressed as lawyers,” he said.

This is not the first time that a firing in and around a Delhi court premises has claimed lives. In 2018, rival ‘Tillu’ gang member was shot dead by Gogi’s men in the same court’s vicinity.

Gangsters Gogi and Tillu Tajpuria, who were once friends, became rivals in 2010 during a college student union election in outer Delhi. In 2018, there was a gang war between members of the Gogi and Tillu gangs in Burari in which three people were killed and five injured. So far, more than 100 people have been killed in the fight between the two gangs.

Gogi, who carried a reward of Rs 6.5 lakh on his head, was arrested along with his three accomplices from Gurugram, Kuldeep Mann alias Fajja, Kapil alias Gaurav and Rohit alias Koi, by a team of Special Cell last year in March, according to police.

The Special Cell was on the lookout for Gogi, Fajja and Gaurav for a long time before tracing them to their hideout in Gurugram in March last year.

A few months ago, Fajja had managed to escape from the police custody when he was being produced in the Karkardooma court and since that incident, the 3rd Battalion of DAP used to accompany Gogi and his associates to court for hearings.