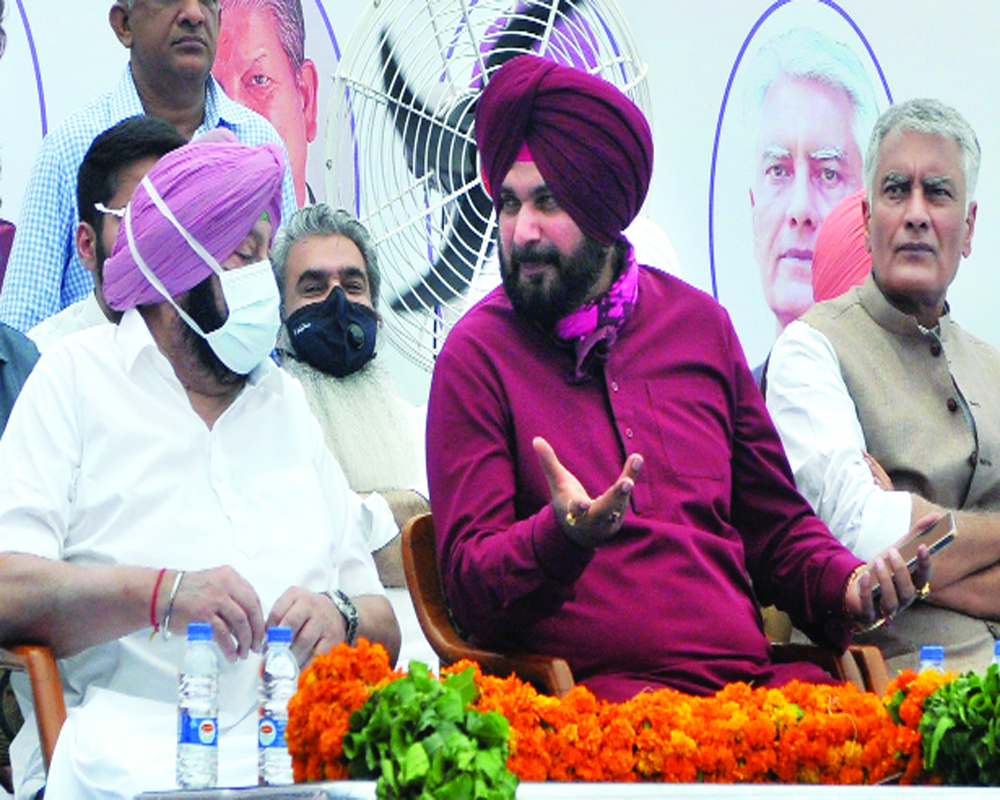 Cricketer-turned-politician Navjot Singh Sidhu on Friday asserted he is in full form for playing his new innings as the Punjab Congress chief by executing a bat stroke with the flourish of his arms in the air before making his way to the podium — giving a glimpse of his cricketing days when he was popularly known as “sixer Sidhu”.

Raking up the issues of “guru di beadbi” (sacrilege incidents), and deaths due to drugs, Sidhu maintained that the Government needs to act against those who are guilty and responsible for these, without naming anyone.

Also raising the issue of costly power in Punjab, Sidhu questioned why the State would buy power at Rs 18, “Why the truth behind these pacts not come out...choraan di chori kyun nahi fadi jaani chahidi,” hinting at cancelling the contentious power purchase agreements signed by the erstwhile Badal-led Government.

“CM sahib, issues have to be resolved…,” said Sidhu, while gesturing towards Capt Amarinder during his speech.

“The purpose of this PPCC chief’s post for me is to resolve the people’s issues. And if these are not resolved, it counts for nothing,” said the Punjab Congress president.

At the same time, Sidhu made an attempt to bypass his run-ins with the Chief Minister by making it clear that his focus areas are the farmers protesting in Delhi, the problems of doctors and nurses and teachers, drivers and conductors, who were protesting on roads.

At the same time, he declared that he has no ego issues and will take everyone along and work shoulder-to-shoulder. “The Congress party is united today, contrary to what our Opposition is saying,” he said, in the presence of former PPCC presidents, including his predecessor Sunil Jakhar, Cabinet Ministers, party MPs and MLAs among other senior leadership.

Declaring that he got “thick-skinned” and cares for nothing more than Punjab’s well-being, Sidhu maintained that those opposing him were only helping him to be better while those supporting him, are his suraksha kavach (security cover).

He named Cabinet Minister Sukhbinder Singh Sarkaria, Sukhjinder Singh Randhawa — who were once considered to be Capt Amarinder’s loyalists, and also “Bibi” Rajinder Kaur Bhattal — former Chief Minister — among those supporting him.

“There is no difference between an ordinary party worker and the State unit chief. Every Congress worker in Punjab has become the chief of the party’s State unit from today,” declared the former swashbuckling Indian cricketer in his opening remarks to an elated crowd that gave him a roaring round of applause and cheers in return.

“There is no party without workers...We are incomplete without the power of our workers, who are the party’s soul...I will only work for Punjab. This is just not an address, but my soul talking. Workers are the soul of the party,” said Sidhu, adding that his main aim is to make these workers a bridge in our “haq and sach di ladayi” (the fight of rights and the truth).

“All will be sikander,” he added.