In talks with PM, Kamala refers to Pak’s terror role

In talks with PM, Kamala refers to Pak’s terror role 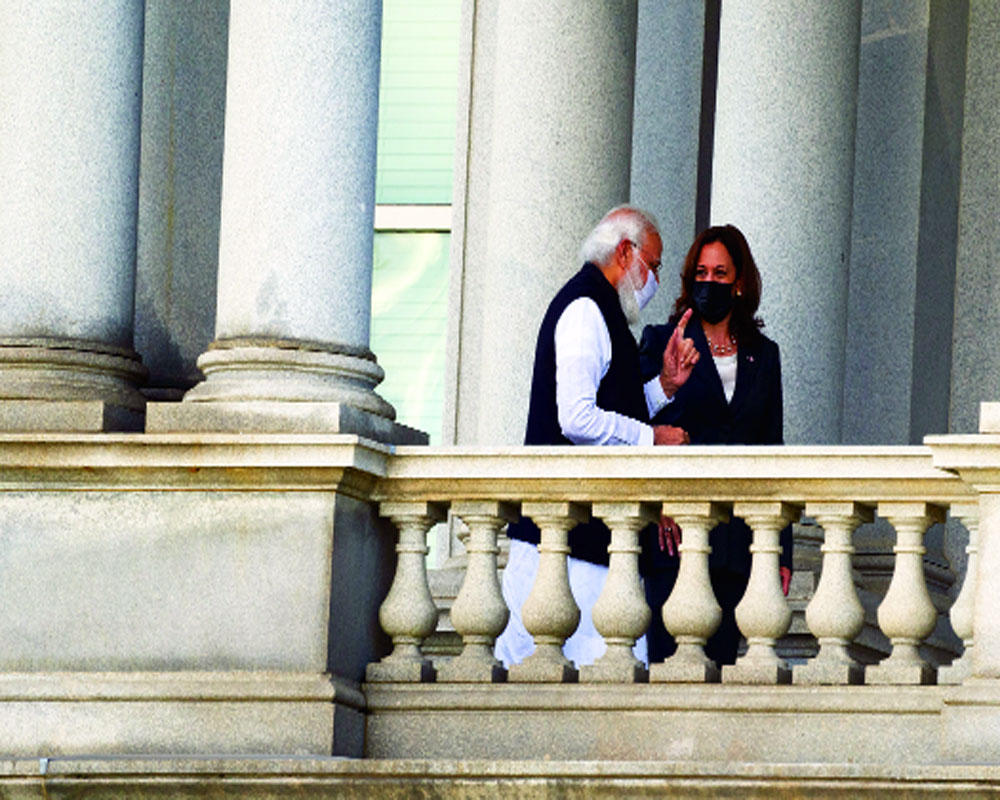 US underlines need to strengthen democracy

US Vice-President Kamala Harris chided Pakistan for sponsoring terrorism and urged it to act against terror groups operating from its soil thereby threatening India and the United States. She made these remarks during her meeting with Prime Minister Narendra Modi in Washington.

Voicing concern over the threat to democracies around the world, Harris underscored the need to defend democratic principles and institutions in both India and the US.

During her one on one parleys with Modi, she also underscored the need to closely monitor Islamabad’s support for terrorism.

“The Vice-President, suo moto (on her own, unprompted) referred to Pakistan’s role in that regard,” Foreign Secretary Harsh Shringla told reporters at a news briefing in Washington. He is part of the official delegation accompanying the Prime Minister besides External Affairs Minister S Jaishankar and National Security Adviser (NSA) Ajit Doval.

The Vice-President added there were terror groups that were working there. “She asked Pakistan to take action so that these groups do not impact on our security and that of India,” the Foreign Secretary said.

“She agreed with the Prime Minister’s briefing on the fact of cross-border terrorism, and the fact that India had been a victim of terrorism for several decades now; and on the need to rein in and closely monitor Pakistan’s support for such terrorist groups,” Shringla said.

She made these remarks in a joint media appearance with Modi before their first in-person meeting at the White House during which they decided to further cement the Indo-US strategic partnership and discussed global issues of common interest, including Afghanistan and the Indo-Pacific.

“I know from personal experience and from my family of the commitment of the Indian people to democracy, and the work that needs to be done (so that) we can begin to imagine, and then actually achieve our vision for democratic principles and institutions,” said 56-year-old Harris, whose mother - Shyamala Gopalan - was a cancer researcher and civil rights activist from Chennai.

Describing India as a “very important partner” to the US, Harris said she looks forward to discussing how the two countries can continue to best work together to strengthen their relationship around their mutual concerns and the challenges they face, but also the opportunities that those challenges present.

The Prime Minister described Harris as a “source of inspiration” for many people around the world. He expressed confidence that bilateral relations will touch new heights under President Joe Biden and her leadership.

“You are being elected as the Vice-President of America has been such an important and historic event. You are the source of inspiration for so many people around the world,” Modi said.

“I am so confident that under President Joe Biden and your leadership, our bilateral relationship will touch new heights,” the Prime Minister said.

“Continuing on your journey of victory, Indians would also want you to continue that in India and wait for you to come to India and therefore, I extend to you an invitation to visit India,” he said.

Recalling his conversation with Harris in June during the second wave of the pandemic in India, Modi said, “A few months ago, we had an opportunity to talk to each other over the phone. We had a detailed discussion at that time and the way you spoke to me so warmly and naturally, I will always remember that.”

“It was a very difficult time. India was confronted with the second wave of the pandemic but like a family, the sense of kinship and so warmly you extended a helping hand. The words that you chose when you spoke to me, I will always remember that and I would like to thank you from the bottom of my heart,” he added.

“Like a true friend, you had given a message of cooperation and full of sensitivity and immediately we found that the US Government, corporate sector and the Indian community all came together to help India,” the Prime Minister said.