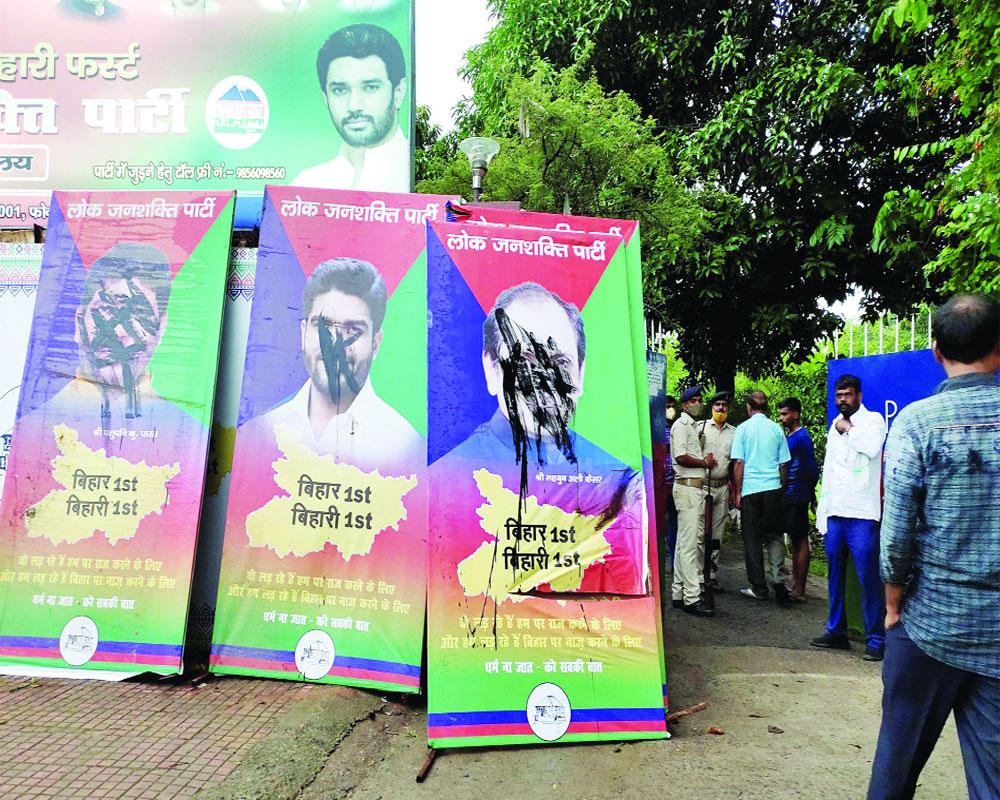 The rival factions of the LJP went in overdrive on Tuesday to gain the upper hand in keeping the party organisation on their side. While Pashupati Kumar Paras-led faction removed Chirag Paswan from the post of the president of the party,

Chirag hit back by expelling Paras and four other rebel MPs from the party.

While it’s clear that the anti-Chirag move has the blessing of both Bihar Chief Minister Nitish Kumar and the BJP leadership, Chirag is hoping that Prime Minister Narendra Modi or Home Minister Amit Shah will come to his rescue.

“After all Chirag batted for the BJP in the Bihar Assembly polls, which spoiled his relation with the BJP. Now it’s up to the PM and the HM to find a solution to this crisis. Chirag may be isolated but he carries the legacy of Ram Vilas Paswan. People of Bihar will never forgive those who betray him in his hour of crisis,” said a leader close to Chirag.

In his first reaction after his uncle Paras ousted him as the leader of the party in the Lok Sabha with the support of four others MPs, Chirag likened the organisation to a mother who should not be “betrayed”.

He also shared on Twitter a letter he had written to him on March 29 that highlighted Paras’ alleged indifference to the party’s agenda and conduct against its interests, and had urged him to fulfil his responsibilities to it and their family following the death of LJP founder Ram Vilas Paswan.

With the Paswan family and the party controlled by it now split down the middle only eight months after the death of Chirag Paswan’s father, the two warring groups are now rallying the members of its organisation to their cause as both factions claim to represent the Lok Janshakti Party.

While the party MPs have sided with Paras, the group headed by Chirag Paswan called a virtual meeting of the party’s national executive in which 41 of 76 members were present, its Bihar unit working president Raju Tiwari said.

It was unanimously decided to expel the five MPs from the LJP for their “anti-party” activities, he told reporters.

It was a hurriedly called meeting, Tiwari said, claiming that many other members also extended their support to the decision and expressed faith in Chirag Paswan’s leadership.

The group led by his paternal uncle claimed that a decision to remove Chirag Paswan, MP from Jamui, as party president was taken in an emergency meeting of the national executive in line with the principal of “one man, one post”.

It was not shared as to how many members attended the meeting.

A meeting of the party’s national council will be called in five days to elect a new president, the group said.

Chirag Paswan is expected to address a press conference on Wednesday, with the battle for the control of the party likely to reach the Election Commission soon.

The Lok Sabha secretariat has recognised Paras’ election as the leader of the party in the House.

In a tweet, Chirag Paswan said he made efforts to keep the party founded by his father and his family together but failed.

People are supreme in a democracy, he said and thanked those who have kept faith in the party.

The letter he had written to Paras, the youngest brother of his father, highlighted his uncle’s unhappiness over a number of issues, including his elevation as the party president.

Chirag Paswan believes that Bihar Chief Minister Nitish Kumar’s JD(U) has worked to engineer the split as it wants to finish him off politically following his strident campaign against the State’s ruling party in the 2020 Assembly elections, sources close to him said.

By painting his uncle as “power hungry” whose conduct “hurt” his father when he was ailing, the young leader seeks to galavanise the LJP’s core support of the Paswan community around him.

In his letter, he also said that Prince Raj, a party MP and his cousin who has sided with Paras, was allegedly blackmailed by a woman over the allegations of “sexual exploitation”. While Paras ignored it, he asked Raj to go the police. There was no reaction from his cousin.

The BJP, the principal member of the NDA of which both the JD(U) and LJP are constituents, has officially maintained silence over the implosion within the party.