Mamata keeps her word, to fight from Nandigram

Mamata keeps her word, to fight from Nandigram 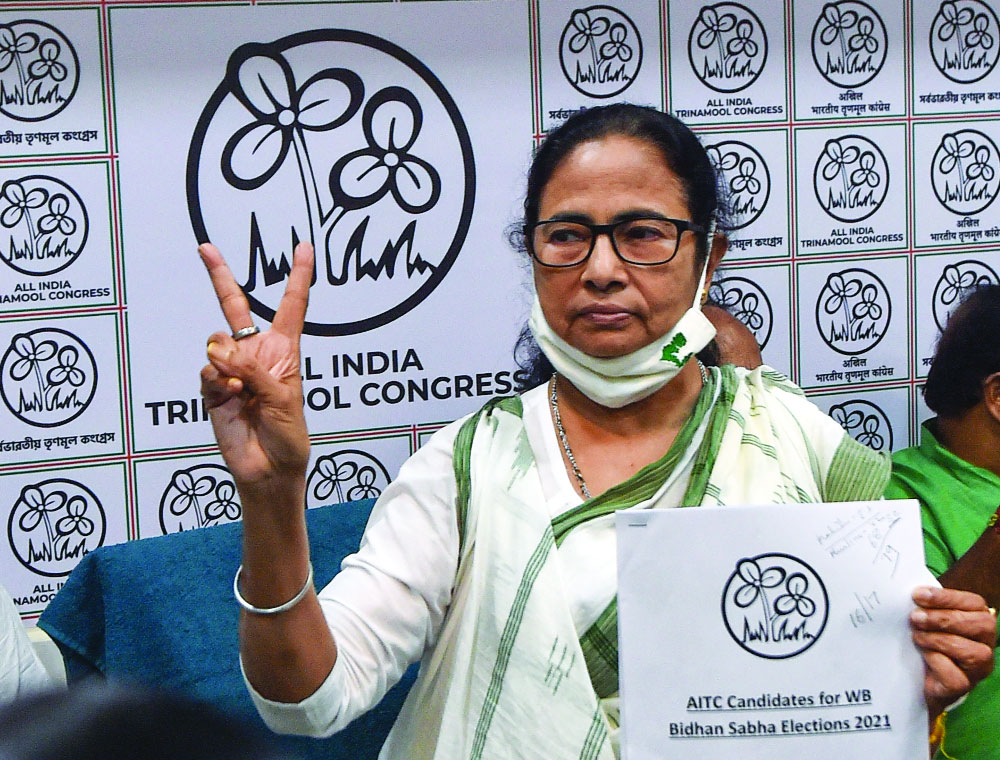 West Bengal Chief Minister Mamata Banerjee will contest from the Nandigram in Purba Medinipur district, dropping out from Kolkata’s Bhawanipur seat, which she had represented for the past two terms. The TMC had trailed from Bhawanipore, the Chief Minister’s home turf, by a few thousand votes in the 2019 general elections. The TMC on Friday announced candidates for 291 of the 294 Assembly seats in the State, and Mamata’s candidature was the highlight of the list.

“I will contest from Nandigram, I had given my word and will stick to it,” she said. Mamata dropped as many as 27 sitting MLAs and five Ministers from the Trinamool Congress candidates’ list, besides introducing about a dozen of celebrities, including cine personalities and players for the upcoming Assembly elections.

Candidates for at least 150 seats have also been changed. A third high point figuring 291 names is nomination of 50 women and 35 Muslims.

The Left Front, which has formed a grand alliance with the Congress and Indian Secular Front formed by Muslim cleric of Furfura Sharief Abbas Siddiqui, too released its candidates’ list for the first phase polls.

Curiously the name of economist Amit Mitra, the State Finance Minister, too does not figure in the list of TMC candidates. Apart from him senior Ministers like Purnendu Bose and Abdul Rezzak Mollah have been dropped.

Among the prominent faces dropped from TMC list is Singur MLA Rabindranath Ghosh, who had been with Mamata through the thick and thin of the land movement. Ghosh’s son had recently joined the BJP.

The richest TMC MLA according to recent wealth declarations — Samir Chakraborty who won in 2016 from Taldangra constituency in Bakura — pulled out of the contest. Chakraborty said that he would campaign for the party. The eight-phase Bengal legislative Assembly elections will be held from March 27 to April 29.

“This time around we have stressed more on youth and women candidates which is why we have dropped around 23-24 sitting MLAs, including some Ministers,” Banerjee said declaring her future plans of re-introducing the State Legislative Council — “where the senior leaders will be re-inducted later on — which had been discontinued by the Left Front Government.”

Asking TMC workers to start working for the party at right earnest “to save Bengal and its rich heritage from the band of outsiders, Banerjee said, “People from some parties are influencing the Election Commission and getting it to act as per their wishes … but I will ask my people of Bengal to defeat their dirty ideas.”

The Chief Minister will file her nomination at Haldia — for the Nandigram seat — on March 10. “0n March 9 I will release our manifesto and on March 10 I will file my nomination from Haldia, “Banerjee said adding, “I will stick to my commitment of fighting from Nandigram,” She, however, said that she could “also consider contesting from another seat of Tollygunge in Kolkata.

While the TMC will fight from 291 seats remaining three seats of Darjeeling, Kalimpong and Kurseong have been left for the Gorkha Janmukti Morcha.

While Mamata will contest from Nandigram seat, State Minister Sobhandeb Chattopadhyay will fight from her old Bhawanipore seat in South Kolkata.

No candidate above 80 was given tickets by her party which fielded former IPS officer Humayun Kabir --- the former Commissioner of Police who had arrested three BJP workers for raising “Goli Maro” slogan in a Suvendu Adhikari rally.

Meanwhile, in a related development the supporters of disgruntled TMC MLAs Arabul Islam and Rafikul Rehman protested at various parts of Bhangor in South 24 Parganas and Amdanga in north 24 Parganas --- both in the vicinity of Kolkata --- after their leaders were denied tickets by the party.

The angry TMC men blocked roads, torched local party offices and jammed traffic while Islam, a known TMC tough, said he would take a decision after talking to his supporters.

“I have given my everything for the party and now I have been given this treatment… the people are angry … I will talk to them and will take a decision after consulting with them,” he said.