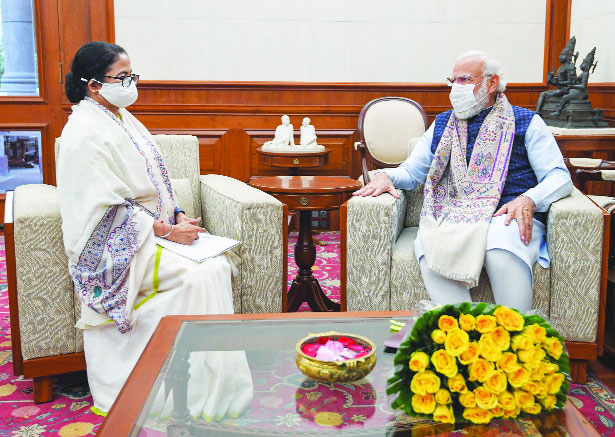 TMC supremo and West Bengal Chief Minister Mamata Banerjee on Wednesday called on Prime Minister Narendra Modi to discuss a range of issues, including demand for withdrawal of the order extending the BSF’s jurisdiction in the State. She also invited the PM to inaugurate the Global Business Meet scheduled in Kolkata for April 2022.

Howerver, what caused more attention during the day was senior BJP leader Subramanian Swamy calling on the TMC chief a day after the regional party inducted several senior party members of the Congress and the JD(U).

Swamy, however, obliquely scotched the possibility of him joining the Trinamool Congress. “I was already with her (Mamata). There is no need for me to join the party,” he told the media.

Swamy who has often praised Mamata on social media met her at TMC general secretary Abhishek Banerjee’s official residence in the national Capital. After meeting the Trinamool Congress chief, Swamy said they discussed the political scenario in Bengal.

The duo even posed for photographs after their meeting. Swamy had met state’s Governor Jagdeep Dhankhar in Kolkata early this week.

During her meeting with the PM, Mamata told Modi that the federal structure of the country should not be disturbed in any way. Speaking to the media after the meeting, she said that she invited the Prime Minister to inaugurate the Global Business Summit which would be held in West Bengal next year. The chief minister said that she raised the issue of violence in Tripura in which TMC workers were allegedly assaulted by BJP workers.

On the upcoming Uttar Pradesh Assembly polls, the TMC supremo said, “If Akhilesh (Samajwadi Party chief) needs our help, then we are ready to extend help.”

On media speculation that during her this visit she chose to skip calling on Congress chief Sonia Gandhi, Mamata clarified that she did not seek time with anyone other than the Prime Minister, saying she understood that leaders are busy with the Punjab polls. In almost all her visits to the national Capital in recent years, Mamata always met Sonia. In her last visit, she had met Sonia, former party chief Rahul Gandhi, and few other senior party leaders.

The TMC chief said she will meet Maharashtra Chief Minister Uddhav Thackeray and NCP chief Sharad Pawar during her visit to Mumbai on November 30-December 1.

Swamy later tweeted, “Of the all the politicians I have met or worked with, Mamata Banerjee ranks with JP (Jayaprakash Narayan), Morarji Desai, Rajiv Gandhi, Chandrashekhar, and PV Narasimha Rao who meant what they said and said what they meant. In Indian politics that is a rare quality.”